The Notting Hill Carnival, the second most famous carnival in the world after Rio de Janeiro’s, is one of Europe’s biggest street festivals and one of the most anticipated summer events in London. The Notting Hill Carnival takes place in the famous London neighbourhood of Notting Hill, but unlike traditional carnivals following Mardi Gras celebrations, this event is not in February, but it takes place in August each year.During a whole weekend, which is certainly the most important summer weekend for this city, London is stormed by tourists from all over the world. On Saturday young people dance and crowd the streets while Sunday is the most suitable day for families and children, because prizes are given for the best and most original costumes. Monday is the highlight of the carnival and a big parade takes place on the festival’s closing day.This carnival was born in 1964 when the Caribbean community of London (especially people from Jamaica) decided to celebrate and honour their culture, traditions and cuisine with this great celebration, which soon became famous all over the world. That year in the alleyways of the neighbourhood, for the first time, dancers and steel drummers, dressed in lavish colours played music on the streets and offered tropical food stands. This kind of carnival had become particularly popular on the island of Trinidad and it’s purpose was to celebrate the abolition of slavery in the country. During the period of slavery, the festivals were forbidden, so the now-free Caribbean emigrants in a new land decided to fully enjoy their freedom by creating this party. Over the years this carnival has set itself as a staple of socio-cultural controversy and affirmation of the identity of the Black and Caribbean community in London. Sometimes there have also been clashes during this event, but in recent years the situation has greatly improved thanks to the work of more than 9,000 policemen and the help of some 40,000 volunteers.Performers, dressed up people, musicians and dancers march on the road on a three-mile journey with live music, mostly reggae and salsa. Dozens of sound systems scattered around the area provide music and entertainment and live performers dance on the notes of traditional music, such as ancient folk songs that recall typical African tribal dances. Masked groups are called “mas-bands” (mas means masquerade). Each and every group shows colourful themed costumes. Originally the costumes represented typical Caribbean gods and therefore often represented spectral and scary figures, but with the passing of the years they turned away from the most popular tribal tradition to get closer to the representation of events related to the present or to the most varied aspects of nature.Along the path of the parade, there are stands with Caribbean culinary specialties from all different nationalities to delight the palates. Caribbean cuisine has always been influenced by French, Spanish, Dutch, British and African cuisines. This is reflected in the wide variety of dishes available and sold at the stands which include roti, an Indo-Caribbean dish served with meat or vegetables, jerked meats, marinated pork, rice and peas, rice with beans, or curries.Nights are animated by fun-filled parties, often themed, in the nearby pubs, restaurants, and clubs. It is fun is to live this carnival as protagonists and not as spectators, and to do so you should go masked and take part in the parade, dancing on the streets and melting in with the crowd.Legendary bands such as the Pink Floyds have been part of this carnival and this neighbourhood is now becoming one of the most beloved London areas by VIPs and famous artists. 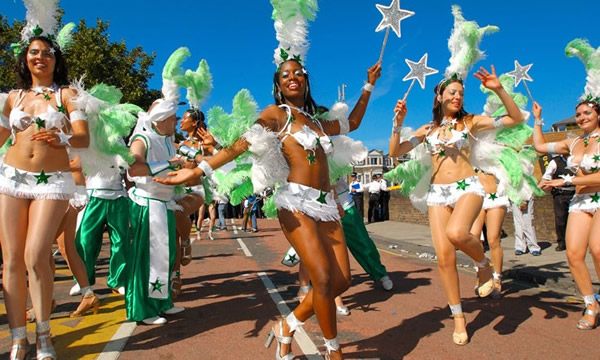 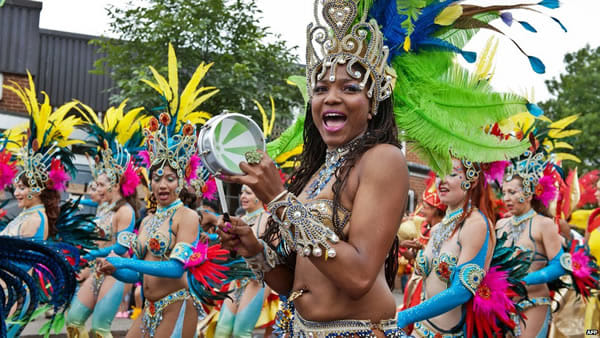