Wearing a pot on his head and carrying apple seeds, a barefooted "Johnny Appleseed" is said to have traveled across the wilderness regions from what is now the eastern seaboard to the Midwest United States. He was an actual person who planted apple seeds in the states of Ohio and Indiana while teaching people lessons. "Johnny Appleseed" was actually a nickname, with his real name being “John Chapman.” As a pioneer of the early United States, he is a legendary figure and many interesting anecdotes of his life are still told today. Every year in Indiana, the Johnny Appleseed Festival is held as a means of sharing the life that he lived and to stimulate historical interest. The festival has attracted large numbers of people from all around since its inception in 1974. This year I was lucky enough to attend the 42nd Annual Johnny Appleseed Festival myself! The festival is held over two days on a Saturday and Sunday, and as it was raining on the Saturday, I think everyone must have decided to go on the Sunday. I also went on the Sunday and decided to go early in the morning to try and avoid the crowds, but when I got there, the venue was already bustling with people. 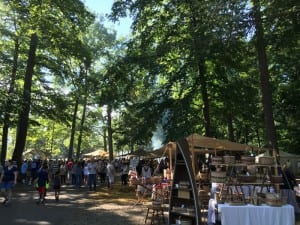 The event venue is a huge lush park where people can usually camp overnight. You can experience life as it was at the time of Johnny Appleseed with attractions such as food stalls, craft stalls, farmer’s markets, demonstration areas, children's areas, and other forms of entertainment. The use of gas or electricity is prohibited for any food preparation and event staff have to be dressed in contemporary clothing of the 1800s. Only items that were available in the 1800s can be utilized, so the use of any modern-day conveniences is not permitted. As with any festival, the food stalls are a major attraction, and this festival in particular is especially appealing for anyone who likes apples! There is an abundance of food made with apples at the food stalls, which is appropriate as the apple is the festival’s symbol. 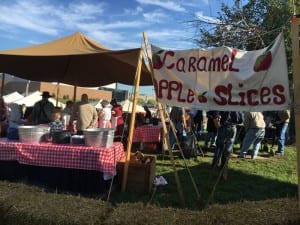 Caramelized apple, apple crisp, apple pie, apple fritters, apple dumplings (a dessert made by wrapping an apple in pastry and baking it)... and there is also hand pressed apple cider! (This apple cider is not carbonated, it is simply freshly squeezed apples with no additives). There are many other apple sweets available to enjoy too. 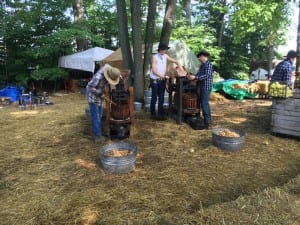 This photo shows the apples being pressed by hand. Freshly squeezed apple cider is refreshing and absolutely delicious, with a pure apple taste. It is a very popular drink in America in the fall. Of course, there is more than just apple sweets available. Other food items include baked potatoes, pork chops, turkey legs, cornbread, and buffalo burgers. The food is cooked over hot coals and the smoky aroma that filters around the venue certainly stimulates your appetite. Lemonade and root beer are also popular, which you wouldn’t see at a Japanese festival. 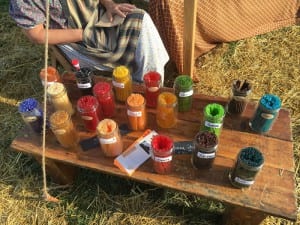 These are called “Honey Sticks,” plastic straws filled with a variety of honey flavors. You simply cut the end of the straw and eat the honey inside. I was drawn to a flavor called “pink lemonade,” and when I tried it, it was delicious and not too sweet. 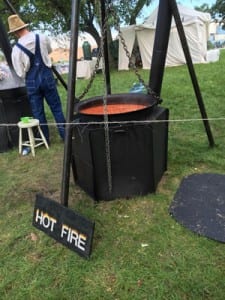 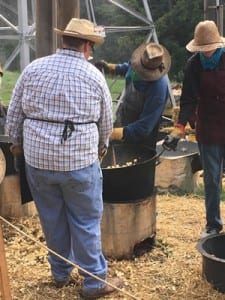 (Left photo) A huge pot of soup. (Right photo) Caramel corn (popcorn) made in a large cast-iron kettle.
As I mentioned earlier, the use of gas or electricity at the festival is not permitted. All cooking must be done using a method that was available in the 1800s. In fact, all food ingredients must be items that were available at the time as well. 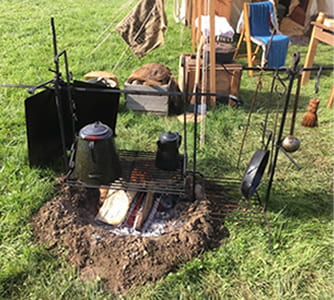 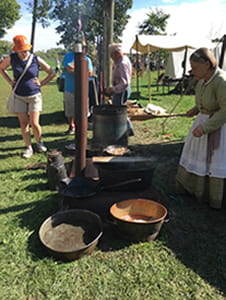 All of the food suppliers make an agreement to give back 20% of their net profit to the festival organizers. In this way, the festival can be held each year without the need to charge people an entrance fee. Most of the sellers are non-profit organizations. They are predominantly volunteers from groups such as schools, churches, Lions Clubs, etc. 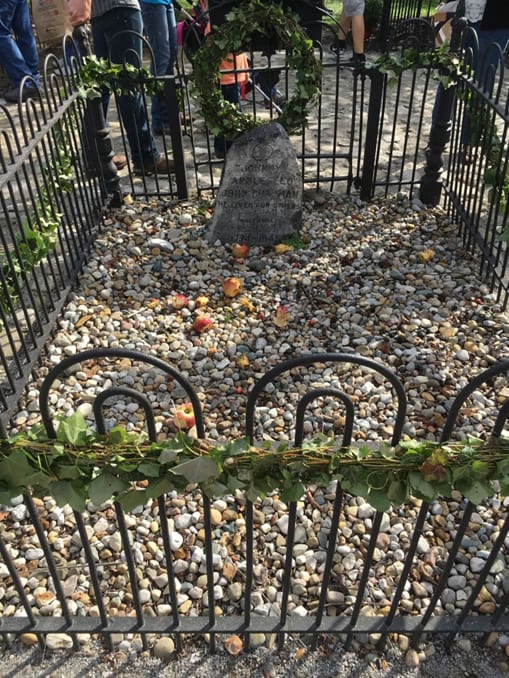 Within the park grounds where the festival is held you will find “Johnny’s Grave.” (*There are a number of theories regarding the actual location of Johnny Appleseed’s grave.) Apples can be seen placed within the fence surrounding the grave. A wide range of hand-made merchandise can be found at the craft stalls, and there are a large number of items made from the sorts of materials that Johnny would have gathered during his travels through the wilderness planting apple seeds (wood, cloth, glass, etc.) 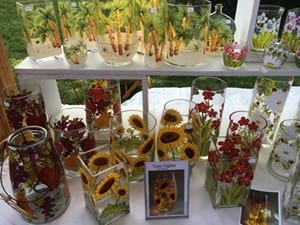 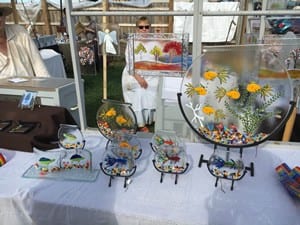 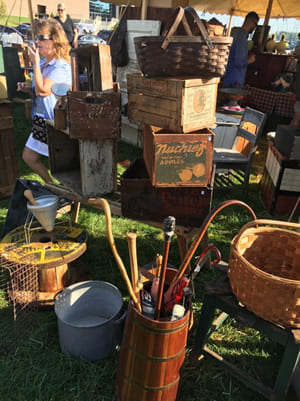 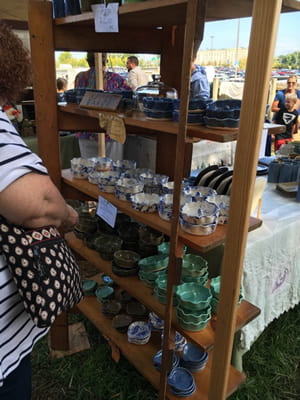 (Right photo: There’s even a contraption especially for baking apples called an Apple Baker!)
There was also an antique area that obviously had furniture and knick-knacks as well as things like crockery and kitchen utensils, vintage clothing and jewelry. A full range of Halloween and Christmas ornaments were also on sale. 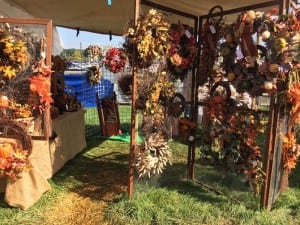 (So evocative of the fall, these wreaths were all hand-made. They were actually making them behind the stall).
There is also a farmer’s market where you can buy fresh fruit and vegetables. 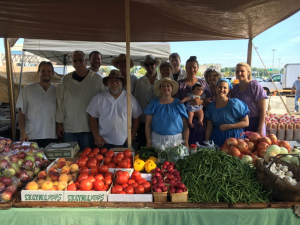 (This group gathered together and smiled when I was about to take a photo of the stall)
You will find plants and dried flowers, as well as delicious-looking bread, muffins, and cookies. A whole range of local goods are also on display such as honey and jams, all produced on farms in Indiana, Michigan, and Ohio. As you might expect, this area also was dominated by apples, and apple cider was also on sale here. 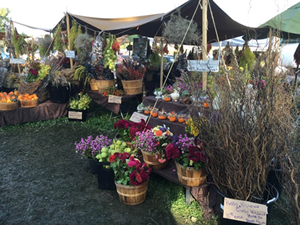 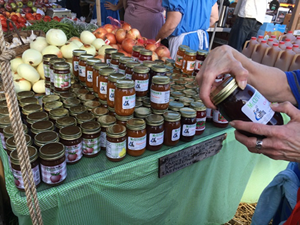 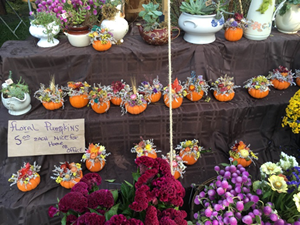 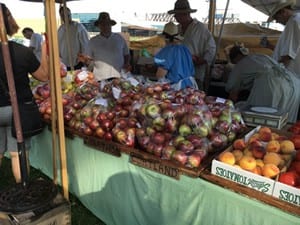 It is a huge festival and it was already past lunchtime by the time I had walked around the venue. Although I have mainly talked about the food and craft stalls, there were other areas that offered a genuine portrayal of life in that era. For someone used to modern-day living such as myself, everything I encountered was a new experience and I was fascinated. This experience was an excellent chance to brush up on history, and it gave me the opportunity to think about the rich lives people lived through their ingenuity in the 1800s, and how our lives nowadays are so brimming with convenient devices. I would like to live without so much dependence on handy devices and just be surrounded by the bare essentials of life.