When a mother is having a baby, Americans celebrate at a party called a baby shower. I hear that more women in Japan have been having them recently as well. I was recently invited to my first baby shower. They’re typically an all-female party, but this one was a little unique. The Kentucky Derby is held every May at the Churchill Downs horse track in Louisville, Kentucky, to determine the strongest three-year-old thoroughbred in the world. Well, the baby shower I went to was also a Kentucky Derby party. The Kentucky Derby is a major historical event that has been going on since 1875, and there are events all over the city in anticipation of the race starting in late April. One of the great sights of the Derby worth mentioning is the spectacular hats worn by the spectators. Watching the race in formal attire and hats has become a Derby tradition, and it creates a magnificent effect at the track seeing all the different styles on TV. So to keep with the tradition, the baby shower participants all had to come in hats as well. Not to be outdone by the spectators on TV, everyone there came wearing an original and stylish hat! (It’s too bad I don’t have more photos of them…).

The party started in the evening to coincide with the race, so all the guests filled out betting sheets with their picks for the winners. 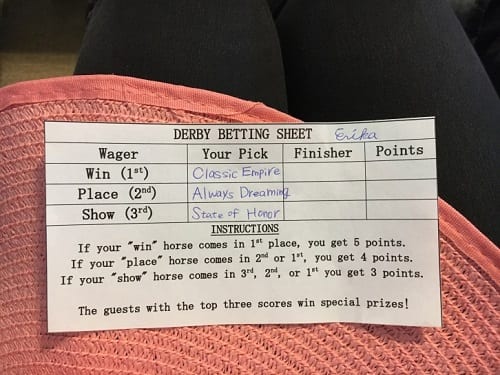 I don’t know the first thing about horse racing, but for some reason it was so exciting for everyone to be guessing the winners. The long-awaited race only lasted a brief two minutes, but at that moment the party went wild. The guests who picked the right winners got a wonderful gift from the hostess! 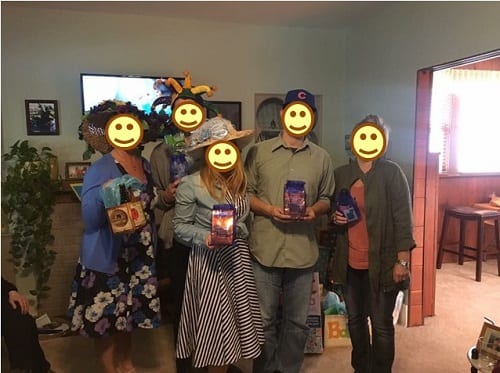 The winner of the 143rd Kentucky Derby was a horse named Always Dreaming—such a beautiful name!Apparently at a real baby shower, there are all kinds of games that keep the party interesting. There’s “guess the mother’s measurements,” “guess the baby food,” and something called “dirty diapers,” where different kinds of chocolate (creamy, with nuts, with caramel, and so on) are melted into newborn-sized diapers… and you can imagine what that looks like! It’s actually a chocolate tasting game, where guests try to guess which famous brand of chocolate is in each diaper. 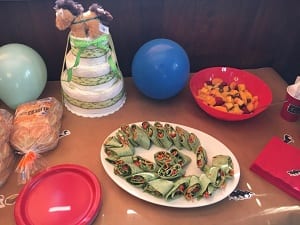 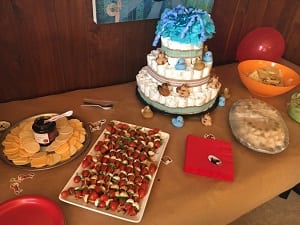 On a table decorated with a diaper cake were all kinds of snacks that people brought in (I took this photo when the party was just getting started, but they just kept piling up after that!). I don’t have a photo of it, but the guys were all out in the backyard around the charcoal grill cooking chicken legs and sausages—there was plentiful, delicious food everywhere. I was in charge of dessert, so I made a cake in the shape of a horse for the Kentucky Derby, macarons, and rose-shaped cupcakes. (The winning horse is given a lei of roses, so another word for the Kentucky Derby is “the run for the roses”!) 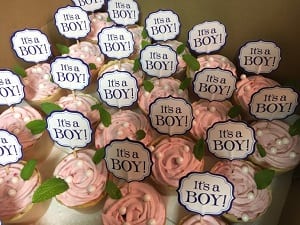 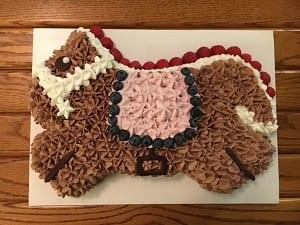 A corner of the room was piled up with gifts brought in from the guests. There were even more there by the time the party ended! 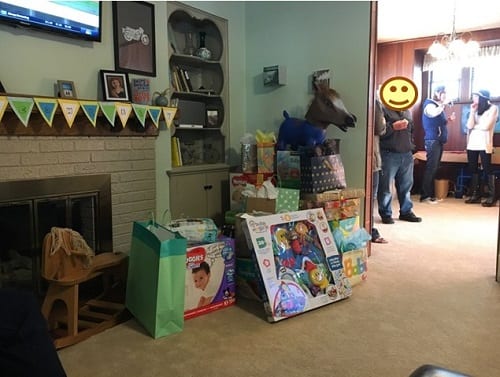 Americans set up a wedding registry when they’re going to get married. Here, there’s such a thing as a baby registry for baby showers, too. The parents-to-be make a list of the things they want in advance (it’s easy to create while you’re in a store or looking at product lists online), and then guests look at the list (website) and select the gifts that are in their budget. Once you pay, the store ships the gift directly to the person’s house. The parents get the things they want, and the guests don’t have to stress over their gifts. I think it’s a really smart and convenient system. You also don’t have to worry about overlap, since the list is set up so that you can’t buy something that someone’s already purchased. You just choose from the things that are left on the list. 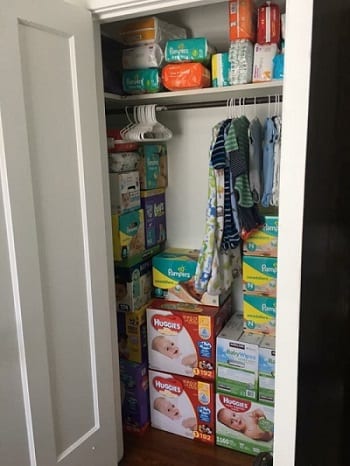 This is a picture that the mom-to-be took a few days later. Looks like she’s not going to have to worry about diapers for a while! Baby showers are a way to “shower” the new mom and baby with congratulations and tons of presents. And they’re also a way to reassure and encourage first-time moms who are sure to be feeling some anxiety leading up to the big event as well. This baby shower left the guests feeling joyful, as friends and family all got to come together to celebrate the new mother.