To conclude Christmas, which celebrates the birth of Christ, the festival called Epiphany (visit by the three Magi of the Orient) was held on January 6. Every year on this day, there is a spectacular historical procession of 500 volunteers dressed up in Renaissance-style attire at the old city center. 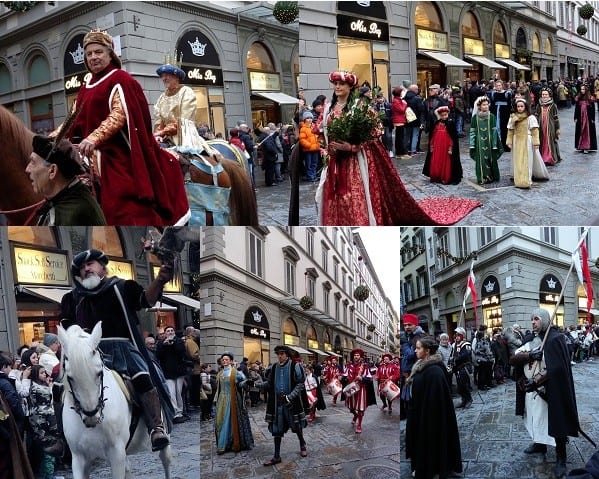 Travel back in time. A scene of the procession with nobles dressed in gorgeous attire, training horses and knights,acrobatics using falcons and large flags as well as bands.
This procession for honoring the birth of Christ was held also during the Renaissance period, and it was the House of Medici, rulers of Florence at the time, that played a significant role in this costume procession. A scene of the costume procession can still be seen today in a fresco painting by Benozzo Gozzoli, drawn on a wall of the Medici Riccardi Palace, a residence of the Medici family. 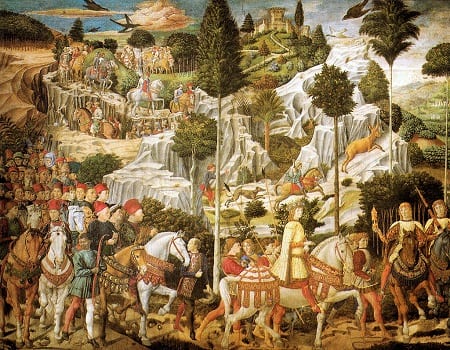 Procession of the 3 Magi who traveled a long distance from the Orient while led by a star to offer gold, frankincense and myrrh to Christ who was born at a stable in Bethlehem. Medici family members dressed up as the characters from the tale.（Author：Benozzo Gozzoli source：Wikipedia）
The city of Florence was able to pass on an enormous amount of art pieces down to our day and become a driving force for producing many famous artists, including Botticelli and Michaelangelo, largely due to the efforts of the House of Medici that became a patron for Renaissance art. Although the Uffizi Gallery and the Pitti Palace collections are well known, the Palazzo Vecchio, which faces the Piazza della Signoria, is a world-class cultural heritage site that still serves as a city hall. 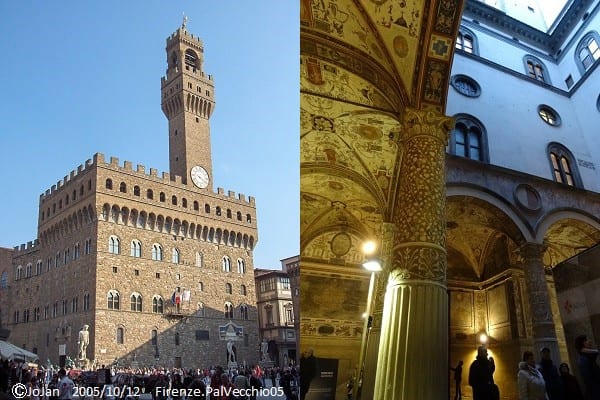 The Palazzo Vecchio facing the Piazza della Signoria. The corridor of the inner courtyard was restored with supportfrom a Japanese company in recent years.（source：Wikipedia）
From 2015, Italy established the first Sunday of each month as a day to open the national art museums free of charge. Since the city of Florence also opens its city art museums free of charge to its citizens on this day, long lines are formed at both the city hall and art museums.I decided to make use of this freebie and visit the Palazzo Vecchio that has served as a governmnet office for 700 years since being built in the 14th century, as well as the gallery inside. The target for this day was to see the restoration exhibit of the Medici family’s treasured tapestry (large woven textile art used to cover the interior wall). These 20 giant and extravagant tapestries (one tapestry is roughly 6 x 4.5 m) drew the attention of all of Italy, having spent 27 long years in their conservation and presevation that included cleaning stains, dyeing the replacement threads, patching up and reproducing scenes that could be reproduced. The exhibit of this completed restoration made its return home to be displayed at the Hall of 200 where it was used as an interior decoration back in 1545, following the exhibit tour at the presidential palace, the Milan Expo, and so on. 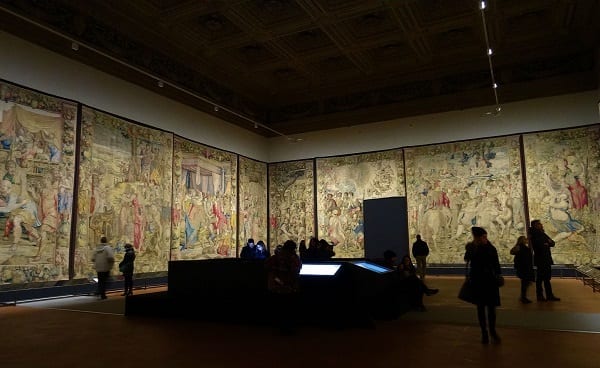 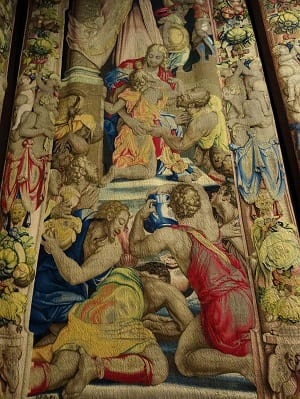 The 20 scenes depicted in the patterns of the tapestries are about the heroic story of the Jew Joseph, which appear in the book of Genesis in the Old Testament and are filled with prophecies and foreshadowing. This story was chosen by Cosimo I, the head of the Medici family at the time, to be a parable that showed the dignity and generosity of both the Medici family and Cosimo I himself.Because the production of tapestries required advanced techniques, it was the norm to order them from other countries such as the Flemish regions, but Cosimo I invited technicians in 1545 to produce the first tapestry made in Florence.

A scene depicted on a tapestry. The scene portrays Joseph’s generosity.The crest of Florence. 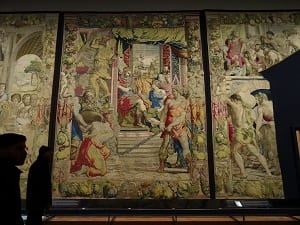 The entire wall of the Hall of 200, which served as the setting for important politics, was gorgeously covered in gold, silver and brocade. Lit by candlelight and swaying slightly due to draughts, the large tapestries must have given the appearance of a moving portait to the one looking at them back in the day, explained the guide. Well, this is going to be the last of my blog posts. I wanted to conclude with an expression of deep gratitude to the city of Florence, and that’s why I wrote about the radiant efforts of the House of Medici who helped the Renaissance to flourish. Also, I’d like to express my gratitude to all of my readers who followed my posts and to the editors of this blog.