The top view of Manhattan (the one that can be seen from the Top of the Rock skyscraper or from a helicopter flying over the area) is stunning and striking not so much for its skyscrapers but rather for the 350 hectares of green of its extraordinary park, perhaps the most famous in the world thanks to its appearance in many movies and TV shows: lush meadows, woods, ponds and winding paths offer New Yorkers the right dose of nature they need. We are obviously talking about Central Park! Although the park looks natural, it is largely manmade. Created in the late 1800s and designed by Frederick Olmsted - one of the top landscape architects in history - the park is a true urban oasis for locals and visitors alike. 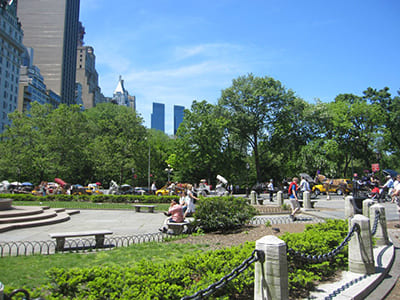 According to its creator, the park was “of great importance for being the very first park of this century, demonstrating a democratic development of the highest importance.” The most important innovations in the project for Central Park were the streets of separate circulation for pedestrians, horses and carriages. In fact the streets dedicated to traffic were placed at a low level compared to the park, not to destroy the natural environment created. The plan called for as many as 40 bridges, all built using raw materials like slate or granite and iron. The 7 mile long road that surrounds the park today is popular with cyclists, people who are jogging and roller skaters. Central Park, despite being an urban park, is characterized by mountains, hills and rocks which help give the park a sense of natural place. Cubic meters of agricultural land were transported from New Jersey, and because the land on the place was not good enough to sustain the various plants that were to be planted according to the original plan, reliefs and hilly areas were created to give the park a wavy rather than flat appearance, offering different levels to its pedestrian paths. 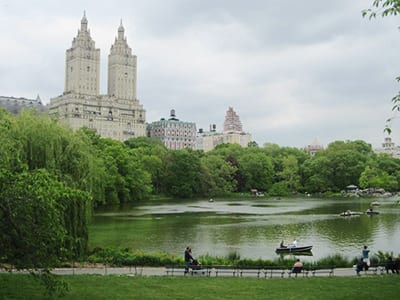 Among the many trees of Central Park, one can find works of art, monuments and statues such as the statue of Christopher Columbus, Shakespeare, Andersen…among many others. One can even find an obelisk donated to the US government by the Egyptians for their contribution to the construction of the Suez Canal. This immense park was created as a place of recreation for all New Yorkers, regardless of race, class and religion. Even today this great park is one of the biggest lures of the city and attracts crowds of New Yorkers who come here for jogging, cycling, skating, playing a baseball game or engaging in another sport, relaxing on one of the many meadows or attending one of the many free concerts held at the Great Lawn. But it doesn’t end here! You can also take the kids to the zoo, visit the Central Park Wildlife Center or enjoy the shows of the famous annual festival “Shakespeare in the Park,” held here every summer. Do not forget that Central Park is truly open to everyone and anyone here is free to improvise and engage in musical events, dancing and skate competitions and do whatever else concerns fun, relaxation or improvisation. 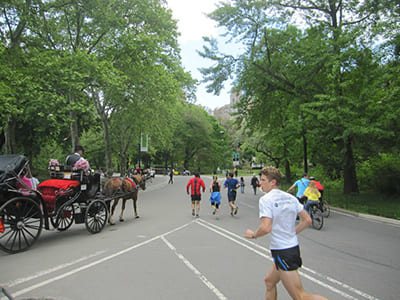 Among the many activities offered in Central Park, you can: cycle (there are several bike rental places here), boat (rowing boats and kayaks are for rent), ice skate and more. There are indeed numerous lakes and ponds within the park, the largest being the Reservoir (dedicated to Jacqueline Kennedy). The lakes are used for boating and paddling during the Summer and as ice skate rinks when they freeze during the winter season. The park is also famous for all the old bridges that have been featured in many films. Locals come here to jog, skate or simply read a book and are joined by curious tourists who often visit the park on a horse-drawn carriage. About 25 million people visit the park every year and the non-profit Central Park Conservancy, founded in 1980, now runs the park under a public contract with the city of New York. 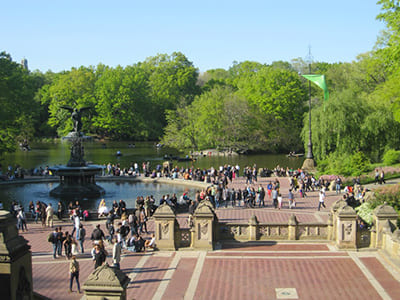 My absolute favorite area of the park is Strawberry Fields. Shortly after the entrance on 72nd street you enter the legendary Strawberry Fields, an area of more than one hectare which is dedicated to the memory of singer John Lennon. This corner of the park was often the favorite hangout of the former Beatles member who used to live just across the street. Right here he was shot dead by a shot of a firearm in 1980. Even today there are many fans who pay a tribute to him by leaving flowers and stuffed animals. 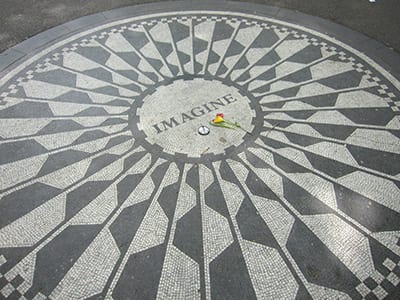 Are you afraid of getting lost? Even the locals often don’t know that here in Central Park, there are small but significant clues that help even the most distracted person to regain the lost road. Getting lost has indeed never been so difficult. Walking, running or riding a bicycle through it, you proceed through the various paths and find many maps across the park signaling your position. Furthermore, Central Park has other hidden clues that allow you to not get lost on the various paths; these clues are scattered everywhere and are commonly found and easily visible…Can you guess what they are? They are the street lamps that illuminate the various paths. On every lamppost there are indeed four numbers. These numbers represent a clue that you can decrypt to find your way. These four numbers are not randomly assigned to each lamppost. The first two indicate the nearest road outside the park (example: 82nd Avenue) while the last two indicate the proximity to the East or West side of the park. In short, they are a cost-effective and intuitive solution to help any person regain the road home. Now anyone who wants to immerse himself in the green of the most famous park in the world, knows how to easily find their way home. And remember…You should spend at least one day to visit the park and to fully enjoy its atmosphere. 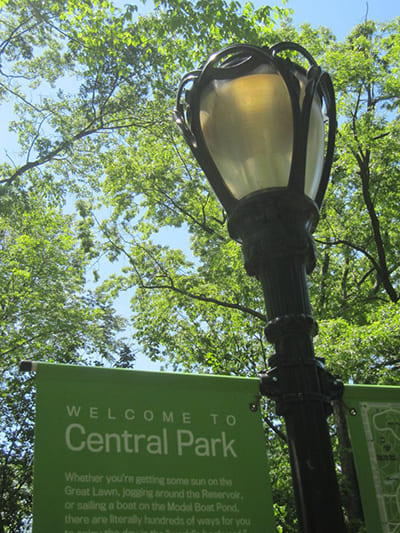