July 4th is Independence Day, America’s birthday. On TV, there were many street interviews asking people what makes them glad to be (or be born) an American, and the countdown to the fourth was displayed all over the place. Not only are American flags put up around shops and homes more than usual, everyone and everything, from clothing to food, is dyed in the flag’s red, white and blue colors and stars and stripes pattern. Kids are out of school at the end of June, so it’s the first event of the summer that families go out together. 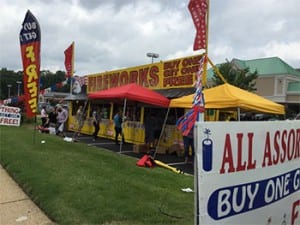 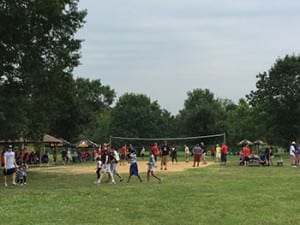 This year it was on a Saturday, and most companies extended the holiday into a four-day weekend starting Thursday, or took a day off on Monday. My husband’s company threw a picnic and all the families took part in the festivities. Since it’s part of his job, my husband couldn’t miss it. Though it was raining, everyone was so excited and rather than cancel the event they waited for the rain to stop. It was completely different from the image I had of a picnic, where you lay down something to sit on, eat from a lunch box, and relax. Someone brought a big grill to cook hot dogs and hamburgers. It was a really sports-themed picnic, with kickball and volleyball, and this time someone set up rock climbing equipment to try out. 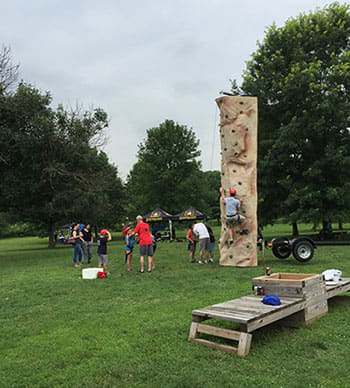 It also came up on a search engine — for Americans, Independence Day is about holding their beloved barbecues, but of course it’s also about fireworks. Unlike in Japan, where small handheld varieties are used, Americans mainly use skyrockets, which may be a reason they can’t be bought at the supermarket or convenience store, other than the fact that fireworks can be dangerous and should not be sold anywhere. Instead, they’re purchased at specialty pop-up roadside shops covered in easy-to-spot colors like yellow and red for a limited time only before events like Independence Day and New Year’s’ Eve.Everybody launched a bunch of them from their yards starting the Friday before, and watched the country’s biggest fireworks shows on the actual day. It wasn’t the same style as in Japan where each is launched and admired separately; the fireworks are launched all at once. And due to the mist brought about by heavy rain until moments before, the fireworks went straight into the clouds, and the sky was white with smoke, so you could only make out a few beautiful ones. My amateur smartphone skills are no good… so here’s a photo from a few years ago taken in good weather by a pro. 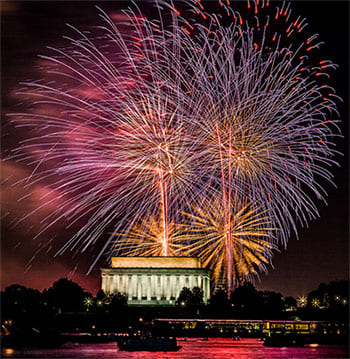 photo by dpbirds（source）Flickr
During the day a parade takes place around the National Mall, free concerts are everywhere and at the end of the day come the fireworks. On February 11th, which is Japan’s National Foundation Day, aside from raising the flag there aren’t any particularly big processions, and we just sort of pass the day off as a holiday. When I watch these people so joyous about living in their country, I get envious, but even though I’m a foreigner I want to wear flag-adorned clothes like everyone else and get caught up in the congratulatory commotion. It’s the biggest thing all year in Washington D.C.