I don’t know if you have or haven’t been to London but do you think you know it? If you come visit the city, you’ll able to judge it with your own eyes and see how modern London has become…skyscrapers rising everywhere where new and old now mix in an abstract pattern.If you can’t travel at the moment, perhaps you can “visit” London through the words of the many authors who have lived here or still live here and who have described ‘their’ London through the ages.Perhaps you can trace down Shakespearean London or, if you are a fan of the young wizard of Hogwarts, perhaps follow the footsteps of Harry Potter? In order to better get into Shakespearean London it is good to retrace some of the steps that Shakespeare has taken in ‘his’ London. This is the route I followed when I first moved to London because I wanted not only to see where he wrote and directed his comedies and tragedies, but also where he was partying with his comrades!If you desire to truly get into the spirit of the most famous playwright of all times, it is impossible not to start from the Globe Theatre, a must-see for all Shakespeare lovers. It is a faithful reconstruction of the first Globe Theatre originally built here in the 16th century, which was closed down in 1642 and subsequently permanently destroyed. This is the first theatre where Shakespeare worked and today this is remembered by a commemorative plate hung on the road by its entrance. The interior of what Shakespeare called ‘his wooden circle’ is simply wonderful and you can easily imagine how glorious it would have been at its time.It looks tiny from the outside but when it was opened it was able to accommodate up to three thousand spectators divided between three circular galleries and the space behind the stage, where he attended the performance by standing and paying one penny to attend his own plays.The stage inside is entirely made of wood and it is painted with hues of blue, gold, red and green and decorated with drawings of the sun, moon, planets and zodiac signs. The structure is formed by a raised platform, with a balcony on the bottom and surmounted by a roof.Although this is a reconstruction, the new Globe has been carefully studied and designed on the basis of reliable historical sources.In Bishopsgate area, I found out that there are quite a few houses dating from at least the early 1500s and among them there is a tiny house which is believed to be the first address of Shakespeare in London (of which we know of).Also the Anchor Inn, which is one of the oldest pubs in London, is relevant because it is where it is believed that Shakespeare used to go have a drink in his spare time. 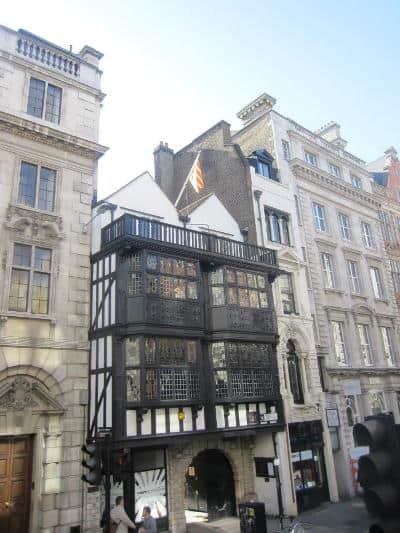 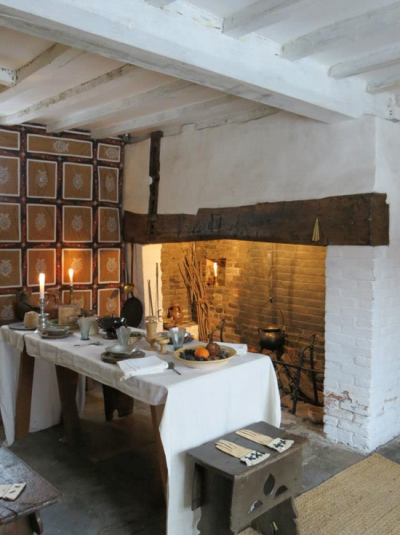 Shakespeare’s house
If perhaps Shakespearean plays are not your genre, nowadays London is also synonymous with magic thanks to the literary worldwide-known cinematic saga of Harry Potter. If you are a Harry Potter fan or even if you simply are curious about it, your visit can start from Platform 9 ¾ at King’s Cross Station. For all Harry Potter ‘rookies’ I must explain that this non-existing 9 ¾ platform, located at the King’s Cross station in the books, is where Harry Potter takes the Hogwarts Express train at the beginning of all his stories, to reach his school for wizards.If you are looking for a direct red train to Hogwarts perhaps you will be disappointed but in return you will find a nice plate on the wall and half a luggage cart that disappears into the wall with which you can take a great souvenir photo (if you don’t mind waiting in line a while!). 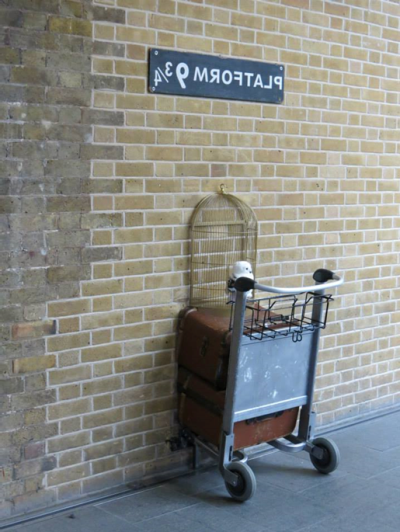 Platform 9 ¾
The magic of Harry Potter keeps on living at the Warner Brothers studios just in the outskirts of the city. The studios are not a mere entertainment park because they include the original sets of the film, including backdrops, props and costumes worn by the protagonists of the magical world of Hogwarts. The studios faithfully retrace the authentic sets and help you discover and learn about animation techniques and special effects. This is undoubtedly the number one attraction for fans of Harry Potter in London and one of my favourite attractions I must admit. 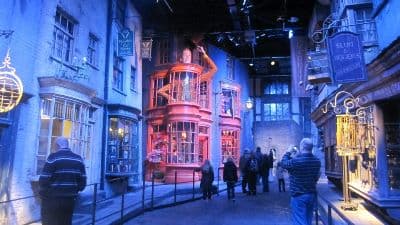 inside Harry Potter’s world at the Warner Brothers Studios 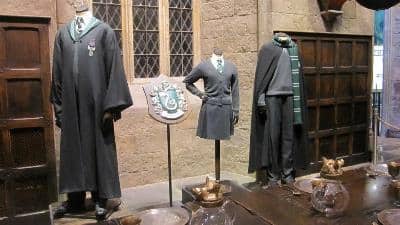 Original costumes from the film