It’s now September and the new school year has begun in Amsterdam. Those who went on a vacation during the summer have tanned to a nice golden brown color. There are people who enjoyed a relaxing time recovering their energy and there are mothers still not used to the hurried hours of the morning. The climate in the Netherlands is characterized by many days of cold weather or much rain except during the summer when temperatures are just right to make you feel comfortable, making this a very precious season for the Dutch. That's why people have a habit to actively get the most out of this nice season. From the time it just starts to get warm to the time when it’s actually cold but you just don’t want to admit it, they go out without a coat, have a cup of tea on a sunny terrace at a café (too chilly in the shade) or ride a boat on the canal, and they all spend a relaxing time each as they fancy. 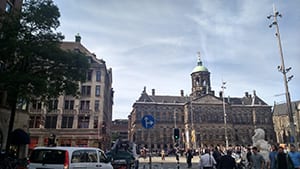 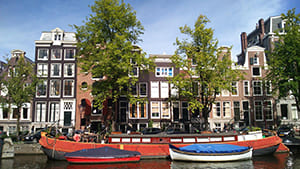 Among the students, it’s common to hear something like, “Today was such a nice day that I wasn’t able to get any studying done.” An excuse like that isn’t criticized but in fact evokes a sympathetic response from others. When I was in primary and middle school, at least once a year during elementary or middle school years, even the teacher would say, “It would be such a waste to spend time inside a building on such a beautiful day. Let’s go outside for class today.” Of course, the students couldn’t be more delighted. Good weather is still going to continue for a while during September in Amsterdam, which is surrounded in a joyful and serene atmosphere. 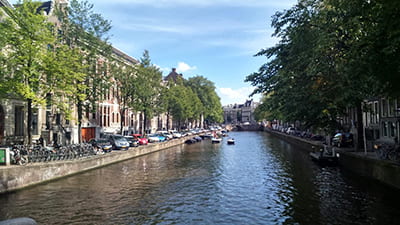 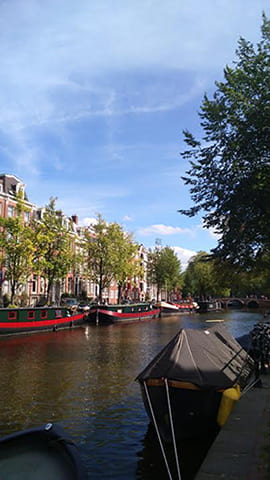 For anyone who wishes to visit the Netherlands, I always recommend the summer as the best and most fun season. The weather is certainly a huge part of that, but I feel that the Netherlands is most beautiful during the summer season. The old townscape of Amsterdam is very charming, with buildings from the 18th and 19th centuries, canals, pretty alleys and the like. There is lots of greenery in the city especially during the summer, and the way in which the big blue sky is reflected in the water of the canal is simply soothing to the soul. Another distinctive trait of the Netherlands is the vast sky. There are two reasons why the sky is so unobstructed and present in the Dutch landscape. For one, there are no mountains in the Netherlands. Due to the lack of sloping roads, the land is flat everywhere you go and unlike Kyoto where the land is also flat, mountains in the surrounding scenery are nonexistent. The lifestyle here of riding bicycles on a daily basis is extremely convenient. So the flat landscape of the Netherlands strongly affects the Dutch lifestyle whether people are aware of it or not. Being Dutch, riding a bicycle is something very normal to me, but I recall that Back when I lived in Kobe, I soon figured out that I had no choice but to give up trying to ride my bicycle to visit various places. 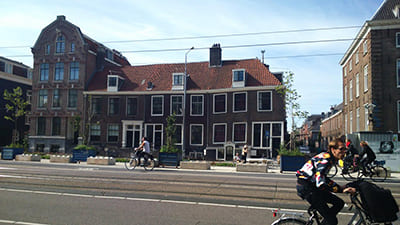 Among the regions of the Netherlands, Amsterdam in particular restricts the construction of skyscrapers. The upper most layer of the soil. is peat bog, and so building heavy objects will result in sinking. Since a very stable substructure is necessary before constructing a building, poles that are 20 meters in length are driven into the ground to reach the sand layer below the peat bog. The Royal Palace at Dam Square is said to stand on 13,659 poles. However, some older buildings gradually sink with the passage of time, and it’s common to see houses that look tilted. These sceneries of Amsterdam both above and below the ground are very much different from what you would see in Japan.