December is a festive month all around the world with Christmas and New Year’s. In the Netherlands, the celebrations start early with Sinterklaas on December 5th. Although more important to kids than adults, it is a big cultural event known by all Dutch people. In this posting I will explain who Sinterklaas is, how Sinterklaas is celebrated and the current debate on the righteousness of this Dutch tradition.The story of Sinterklaas goes accordingly. Sinterklaas (or St. Nicolaas) is a saint who resides in Spain, but comes to The Netherlands every year in celebration of his own birthday on December 5th. He comes accompanied by his helpers who are all called “zwarte Piet” (“black Piet”; Piet is a common Dutch first name). Although it is his birthday, the generous saint gives out presents instead of receiving them. For this purpose, Sinterklaas has a big book in which he keeps record of all children’s behaviour during the year and decides who gets sweets and presents and who get ‘de roe’ (a whip made a tree branches to hit with). Really bad children get taken back to Spain with Sinterklaas in a burlap sack. A horror which can be very scary when you’re 5 years-old. 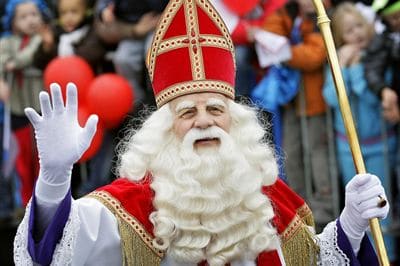 ［source of a quote］ http://www.historien.nl/sinterklaas-man-achter-de-baard/
Although the main event is on December 5th, Sinterklaas and his entourage arrive in The Netherlands about three weeks before by ship. Every year a place in The Netherlands is chosen for Sinterklaas’ official arrival and the parade which follows through the city. This event is thoroughly covered on national television for all kids to follow who don’t live near enough to go and greet Sinterklaas themselves. However, in most cities throughout The Netherlands Sinterklaas will (remarkably) also have a parade the same or next day. In Amsterdam especially, this is a big event with reporters on location, 600 Piet’s handing out over 4000 kilos of candy and 350.000 children waiting along the route of the parade which is in total 11,5 kilometers long (5,5 kilometers by boat through the canals and 6 kilometers by horse). 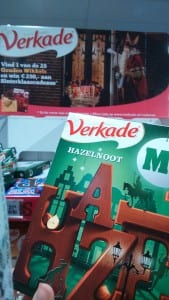 The period from the arrival of Sinterklaas until his departure in the early hours on December 5th, is filled with activities for young children. Sinterklaas will visit elementary schools and at home children will leave a letter or drawing and perhaps a carrot for Sinterklaas’s horse before they go to bed on some days. If they are good kids (and their parents communicate in time with Sinterklaas) there will be some sweets to be found in their shoe the next morning. Local stores and businesses also join in and organise activities and a lot of Sinterklaas-limited sweets are being sold such as all kinds of pepernoten (cinnamon flavored, tiny cookies which are eaten by the handful), shaped marzipan figures and chocolate letters (everyone gets the first letter of his or her first name in chocolate). 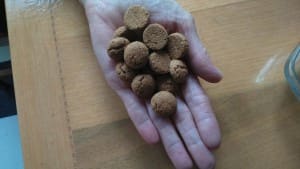 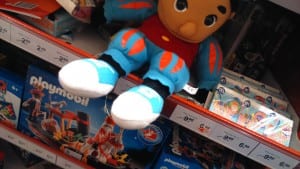 On the evening itself, Sinterklaas parades the roofs of all families in The Netherlands on his horse and with Zwarte Piet on foot. At every house they stop and Zwarte Piet climbs down the chimney with the burlap sack with the presents. This is why Zwarte Piet’s face is black; he is covered in soot. Zwarte Piet climbs down, leaves the presents, throws some pepernoten around the room and returns to Sinterklaas’ side again. Children will find their presents the next morning. At some houses Sinterklaas is celebrated differently. The family will wait for Sinterklaas and Zwarte Piet while singing Sinterklaas-songs. Then, suddenly a loud knock is heard on the door and the burlap sack with presents is thrown inside the home together with again, some pepernoten. Children scream and will try to get a glimpse of Sinterklaas or Zwarte Piet, but they always vanish quickly. In general Sinterklaas is celebrated in either one of these ways until the youngest child is about nine. 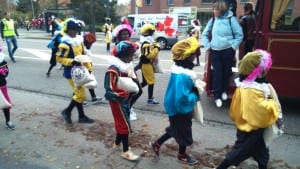 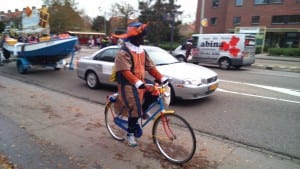 When all family members are ten or older, Sinterklaas doesn’t come to the house anymore. However, many families still enjoy the celebration in a different ways. One way is to pick straws with everyone’s name on it and prepare a present and a poem in name of Sinterklaas for the person on your straw. On December 5th all family members come together and read their poems from Sinterklaas aloud and open up presents together. It makes for a really pleasant, cozy and nostalgic evening. In recent years the celebration of Sinterklaas has met with some objection from people who find it ridiculous that “we” Dutch celebrate an event which is centered around a white saint and a “black” helper. Although different from the story told to children, it is argued that it Zwarte Piet is a caricature of a black man because he has black skin, red lips, frizzy black hair and big golden earrings; an image which is indeed to be found in older portrayals of black men and women in history. Some even say Sinterklaas and Zwarte Piet is offensive because it would refer back to slavery. Needles to say, this interpretation is not in sync with the values we all hold today. This view against a black Zwarte Piet is opposed by many who feel that the tradition of Sinterklaas should be kept the way it is and doesn’t refer to any mistreatment of black people, because, as explained above, Zwarte Piet is black from the soot in the chimney, and not because he’s supposedly from Africa. As this discussion has been popping up in recent years, at some events “Color Piets” have also made appearances, but the black Zwarte Piet doesn’t seem to go anywhere anytime soon. Dutch Children seem to enjoy the festivities either way. If you would like to see what the parade was like this year, please have a look herehttp://www.sintinamsterdam.nl/over-de-intocht/