Although Taiwan is a small island nation, its IT industry has always been thriving, with Taiwan’s computer production making up 90% of the entire world’s. Taiwan’s anime production also makes up the world’s 30%. Computer manufacturer ASUS and Acer, as well as computer virus removing software Trend Micro, bicycle maker GIANT and film director Ang Lee are all well known. In addition, baseball player Chien-Ming Wang of the U.S. Major League, the restaurant Din Tai Fung known for their xiaolongbao dumplings and the tapioca milk tea were also all born in Taiwan. However, when we go abroad, people ask us, “Where’s Taiwan? Is that the same as Thailand?” Then we always have to explain, “No, no. Taiwan and Thailand are completely different!” Such being the case with Taiwan, the “I Love Taiwan” project is now spreading.From 1949 during the rule of Chiang Kai-Shek, the administration and courts of Taiwan were all under military control for about 40 years. Following the first direct election held in 1996, the citizens were finally able to participate in politics. Politically, though, neither the World Health Organization nor the United Nations have yet to recognize Taiwan as a country. In people’s lives, there have been various problems such as the education revolution, a great earthquake in central Taiwan, SARS, world financial crisis, low wages of university graduates, food safety crisis, pro-China stance and student movements.According to one theory, the generation facing the most challenges in Taiwan is said to be the early generation of those born between 1981 and 1991, the so called Seventh Generation based on the Republic of China calendar. Almost anyone can enter universities now due to the education revolution, but this generation had to study desperately amidst the great earthquake and SARS outbreak in order to enter university. Yet, after finding employment, the housing market saw prices jump tenfold and wages would not increase for ten years due to the impact of the world financial crisis, leaving them unable to even purchase homes. It is this generation that is leading the “I Love Taiwan” project. 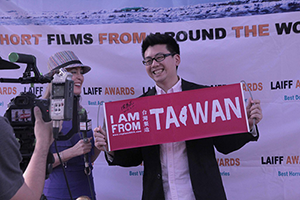 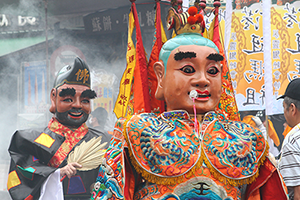 Jian-Heng Wu shared Taiwan’s traditional culture with the rest of the world through Techno Three Prince performances of puppets resembling gods that dance to techno music. In October of 2012 on National Day, over 2,000 people created human letters while holding a plate with the “I Love Taiwan” project logo and chanting “I love Taiwan” (我愛台灣), and were recognized as the world’s largest human letters by the Guinness World Records. Film director Mark Ang held a red flag with the words “I’m from Taiwan” written on it to appeal the presence of Taiwan. Through their own methods or fields of expertise, many of those from this aforementioned generation who possess a strong mutual desire are active in their hopes to be recognized by the world.

In the movie Batman, there is a line that goes like this.“The night is darkest just before the dawn. And I promise you, the dawn is coming.” I believe these words precisely describe the current Taiwan.For Taiwanese people, the words of praise they now like to hear most is “I love Taiwan.” The next time you’re in Taiwan, please use these words as a way of saying “thank you.” They will surely be excited to hear those words.

Mr. Lin earned a graduate degree from the Kyoto City University of Arts. With a focus on international collaborative businesses, he actively works as Taiwan coordinator and producer for content general-copyrighting and portrait rights trading, location and market planning, etc. He also established an NPO called “FUTURE Film Day” to begin his volunteer work. He has hosted the “Youth Series Film Festival” and been involved in the “Taiwan AniCup” and is striving toward the goal of making it the world’s largest union of video organizations. Mr. Lin is the president of the Taiwan Future Film Association .