Winter is also the time of the year to look into some old travel guides, looking forward to all the places to visit in the new year. Though it may be exciting to read into all those wonderful places far away, it is valuable to enjoy the places that are close to you as well. In my case this is Rotterdam, the largest city close to my hometown. When encountering an old Japanese travel guide about the Netherlands, I was curious to explore what kind of places of this city were being appealed to a Japanese audience. Then I was somewhat surprised to find out that places of interest were still limited to ‘De Oude Haven’ (The Old Harbour) and the cube shaped houses around there. I realized again that the Rotterdam that we appreciate nowadays has become more than that, and that there is so much more to learn about the many charming places that the city has to offer. 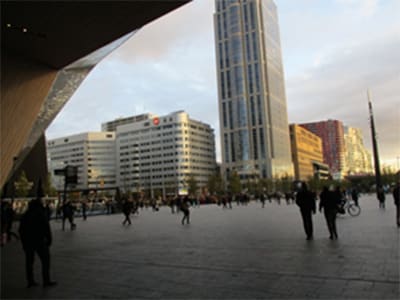 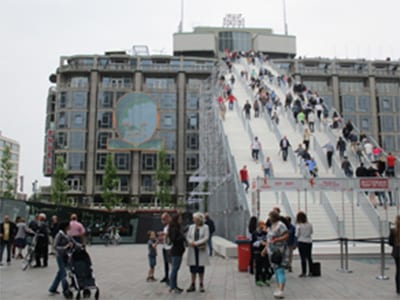 The year 2016 was a special year to the city of Rotterdam. It was this year when the city, nowadays famous for its world port, looked back on 75 years of reconstruction after its destruction during World War II. The result of the efforts of this yearlong reconstruction has been celebrated this year with a series of events under the theme of ‘Rotterdam Celebrates the City’. One of the most conspicuous events was the construction of a giant stairs with 180 steps in front of the Central Station all the way to the Groot Handelsgebouw (Wholesale Building), one of the first monumental buildings that was built after World War II. When entering the city by train, this building as well as the hypermodern central station with its tilted roof catch the eye. This first sight of the city, with its spacious area surrounded by skyscrapers, may give an impression that is quite different from other Dutch city centers. Rotterdam is modern, calm and structured, with (according to the Dutch saying) full of people who prefer working hard before coming over for a chat. I have heard some people mentioning that they found Rotterdam difficult to enjoy when visiting it for the first time. And certainly, Rotterdam is not ‘instant entertainment’, but a city that you should know better in order to enjoy it to the fullest. This is why I recommend walking the city with those who know the way. When opening your eyes for the new, and not taking the routes indicated in older travel guides, you will encounter many unique places that remain in your heart. 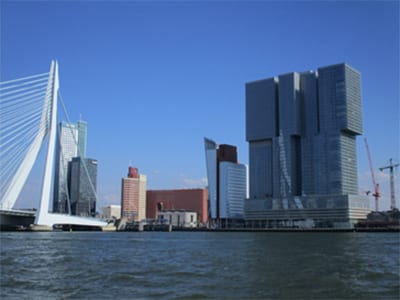 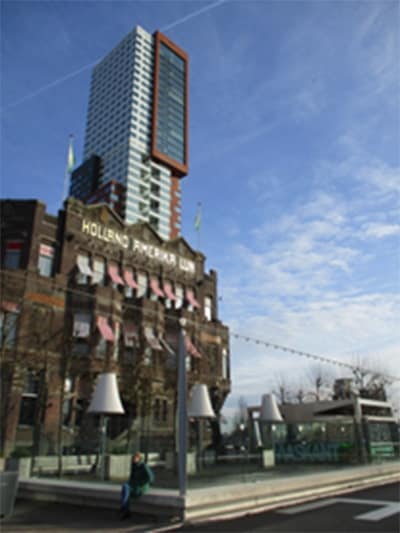 My favorite walk in Rotterdam always begins on the station of Wilhelminaplein. The spacious interior of this metro station with its large escalators brings us to the cross point between the famous Swan shaped Erasmusbrug and the Wilhelminapier. When walking over the pier, old warehouses with the names of products from its former destinations, such as ‘Java’ and ‘Ceylon’ can be seen. These are a few of the remaining prewar buildings of Rotterdam, that have been restored and turned into apartments. Nowadays, these old warehouses are accompanied by cutting-edge skyscrapers on the same pier, some with the most outstanding, asymmetrical shapes. These buildings color the Skyline of Rotterdam and offer a beautiful sight during the nighttime. A skyline that begins with the multicolored bird-shaped bridge, then moves to the largest glass building of the Netherlands named De Rotterdam, to the World Port Building, all the way to the authentic Hotel New York. This prewar building used to be the main office of the Holland – America line, where Dutch families departed to the United States in search of a better life in the 19th century. Having seen so many ships and people coming and going, the building still looks out proudly on the river ‘Maas’. Especially the blue tower and the clock on top of the building catches the eye. 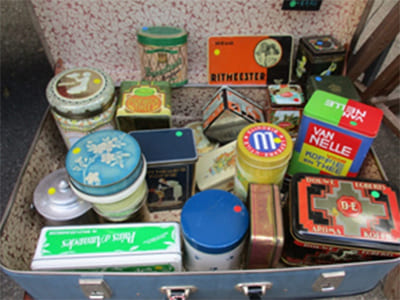 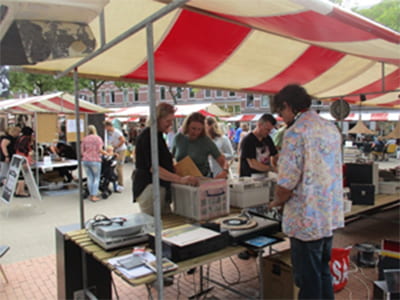 After having spent a time at the café of hotel New York with its unique interior, or in the creative film and jazz theater Lantarenvenster, it is time to explore another island nearby. Next to Hotel New York and the wharf of the water taxis a pedestrian bridge decorated with locks of lovers can be found. When crossing the bridge, one can explore Katendrecht, one of the areas of Rotterdam that has been improved considerably the last few years, and has turned into one of the many charming parts of town. Though these old warehouses and harbor houses used to be decayed, the plaza has transformed into a cozy meeting place of people, being surrounded with green. Behind the historical facades of the restored buildings café’s, restaurants and small shops can be found. On the plaza, each month a vintage market is being held, were locals exhibit and sell their homemade cookies, handmade accessories as well as their second hand pottery, kitchen utensils and furniture. Seeing all these brightly colored curtains, toys and chairs on carpets and old Volkswagen buses, while listening to relaxed music of the old record, the vintage market feels like traveling back in time. 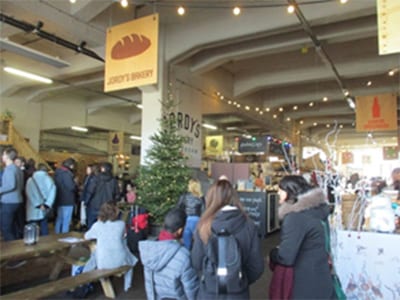 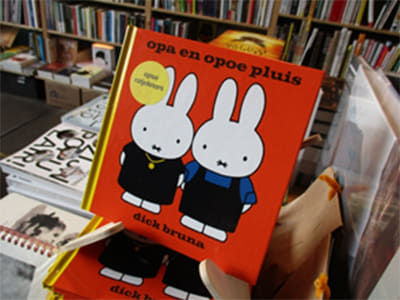 After having enjoyed all the old and new things and creative spirits on the market, it is time to take a look in the largest warehouse. Though this industrial building with its large ceiling used to be a store house for spices and metal, nowadays it is known as the Fenix Food Factory. Here you can buy original souvenirs, such as Rotterdam beer that was made in the brewery of the Food Factory itself. Also in the book shop with its large photo albums and colorful, illustrated books, unique presents may be found. Here you can see Dutch as well as English books on the city and even Miffy books written completely in Rotterdam dialect. Then, you may become distracted by the scents of the many food stalls around the bookshop. Not only groceries can be done in the Food Factory, where organic vegetables, bread, cheese and meat can be bought. Also you can enjoy lunch in a Rotterdam fashion. For example, after having enjoyed treats such as freshly baked bread with humus and Moroccan tapas, the nose gets easily distracted by the sweet scent of ‘stroopwafels’. These typical Dutch wafers with originally a syrup filling have somewhat different, yet refreshing flavours in the Food Factory, such as lemon, cheese and peanut butter. It is an electric eating experience that I find somehow fitting to the multicultural, innovative city of Rotterdam. 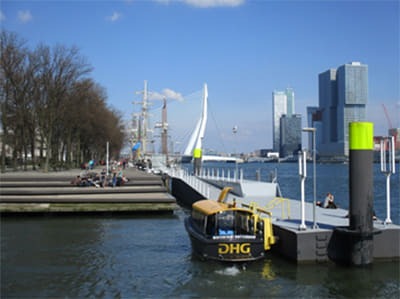 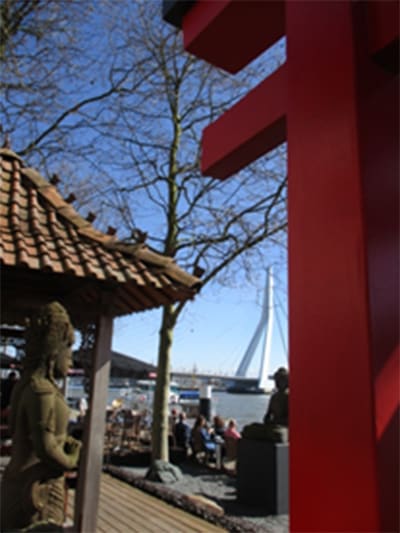 Looking out from the Wilhelminapier to the current of the water, to the other side of the Maas, more interesting places can be seen, such as the authentic white building of the World Museum accompanied by small pavilions from all over the world, the traditional Dutch sailing ships in the harbor and the largest park of Rotterdam with the viewing platform. I realize that there is so much more to see. The stroll over the Wilhelminapier and Katendrecht is just one of the many interesting walks throughout Rotterdam that can be made by foot and by the mind, always being surrounded by the flow of the river.