Located in the very heart of downtown Portland, Pioneer Courthouse Square is dearly known to residents as Portland’s living room. A decade ago, the square used to be a run-down parking lot but it has now being reclaimed and transformed into a bustling urban park and has become the most-visited place in the entire state of Oregon, attracting more than 9 million visitors every year.  The square has been named after the Pioneer Courthouse (the Pacific Northwest’s oldest federal building) which is located on the eastern side of the square.  Tourists, families and downtown office workers gather here daily to enjoy the city, rain or shine, and take advantage of its many amenities. The square offers some of Portland’s most famous food carts which are parked on the red bricks of this open space.  ‘Portland’s living room’ also grants free Wi-Fi as part of the city plan to make the entire city a free Wi-Fi spot. 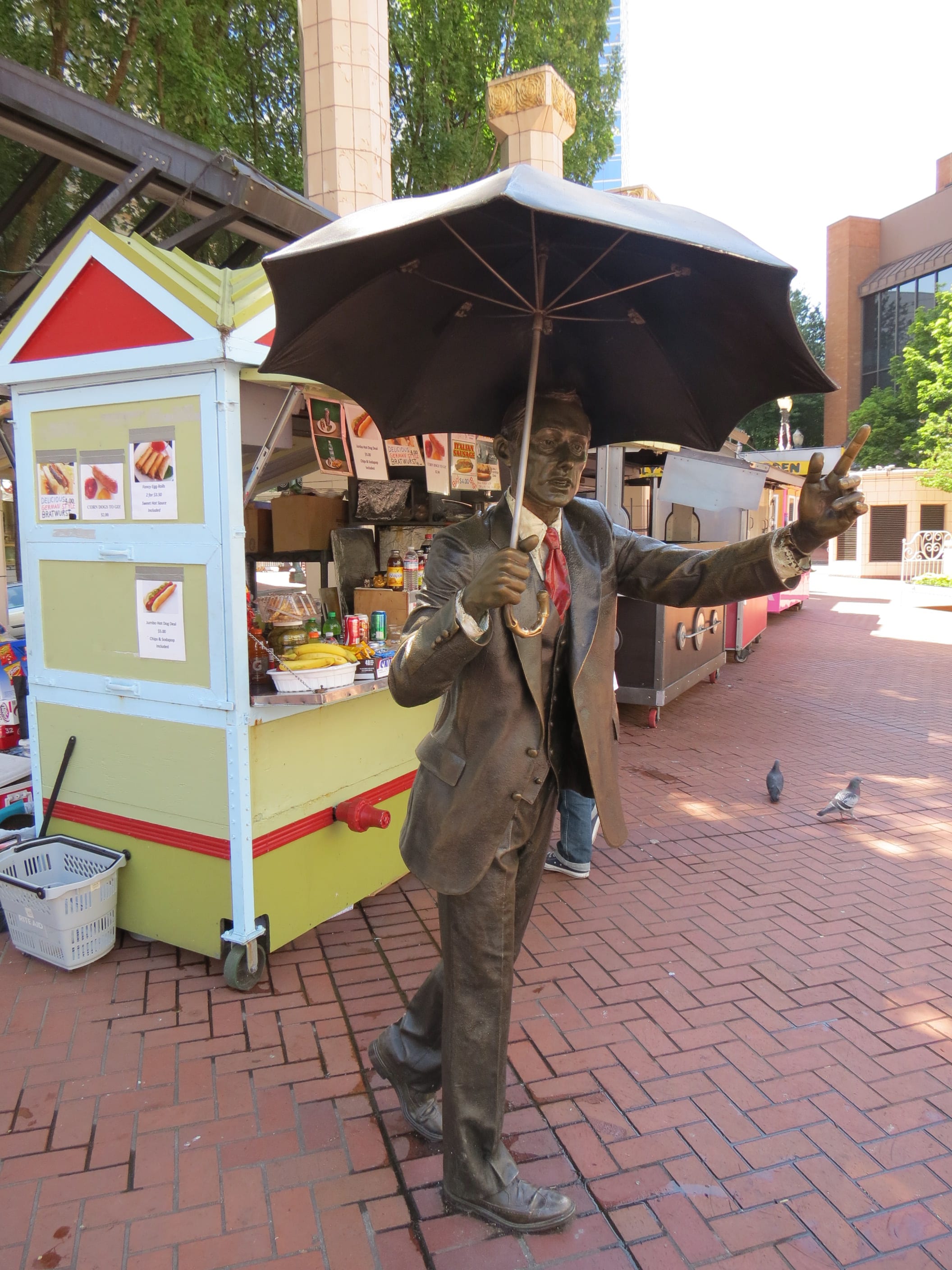 This urban park is also equipped with a life-size chess board free for anyone to play and has many cafés that are scattered all around it.  The most popular and posh bars in Portland are also found near Pioneer Courthouse Square and the most prestigious dancing clubs compete to have a terrace overlooking this place, especially during the summer months. 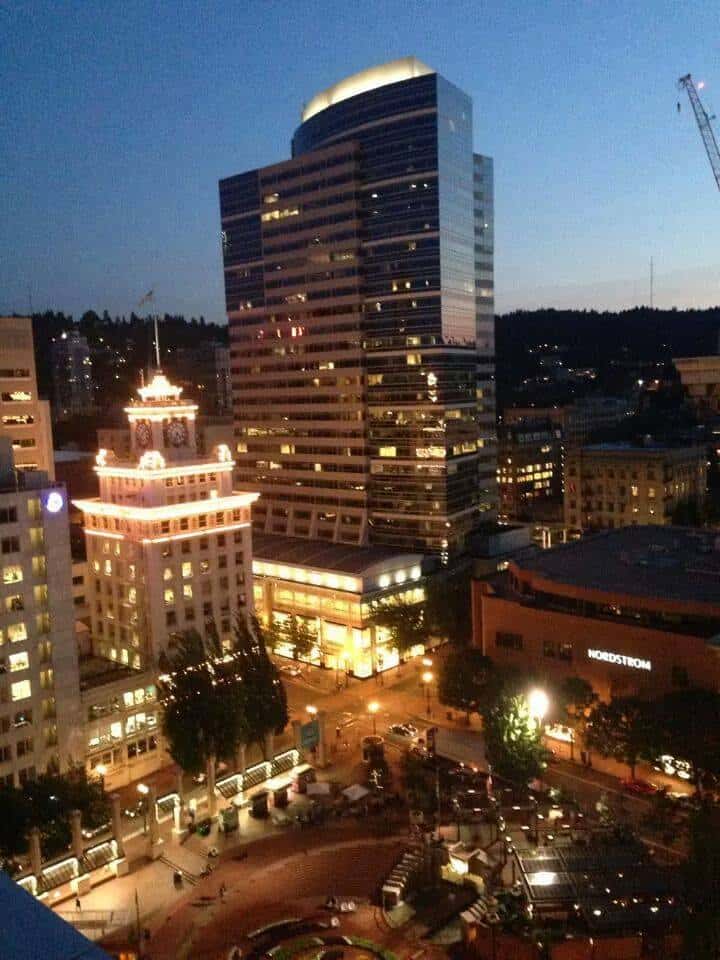 The red bricks which cover the square’s floor can be ‘purchased’ for engravings and the floor is indeed covered with inscriptions of lovers celebrating their anniversaries and also some marriage proposals. 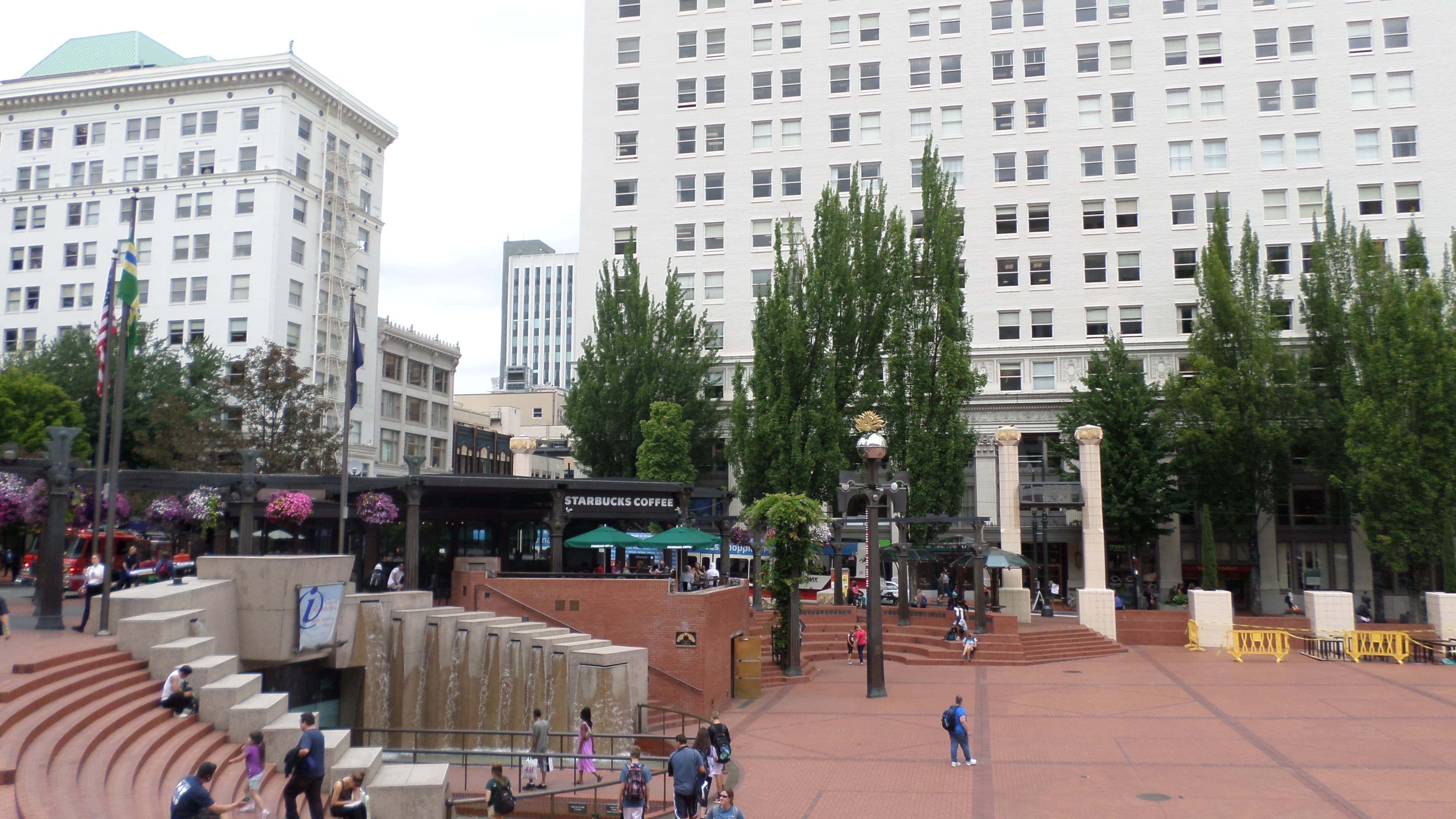 This space hosts shows, fairs and art displays and presents a total of about 300 events each year (almost one per day!), from large-scale music concerts to local markets, such as the ‘Portland’s Flower Market’ which fills the space every Monday.  During the summer, ‘Flicks on the Bricks’ transforms the ‘living room’ into the State’s biggest open-air and free of charge Movie Theater. 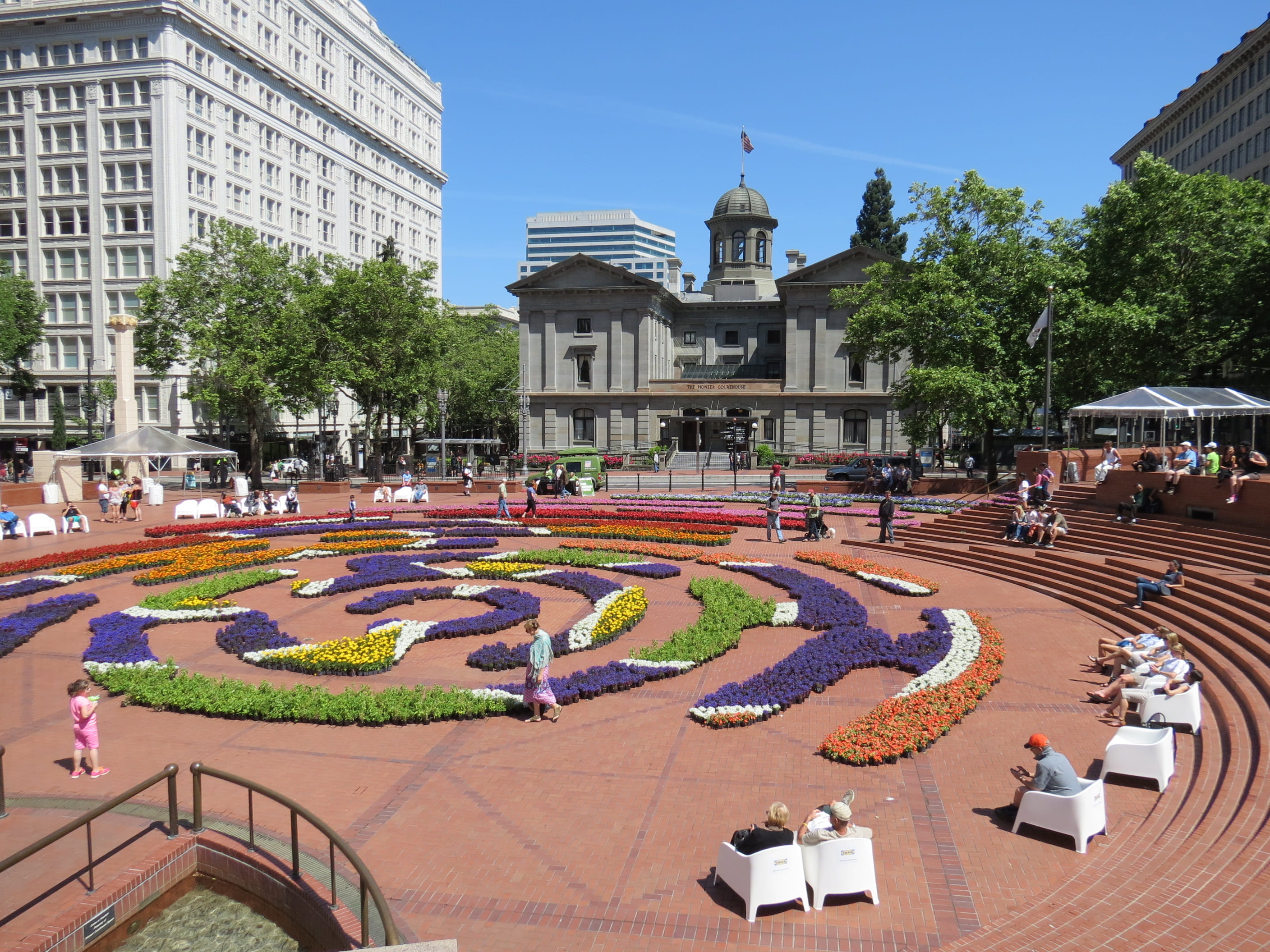 Many are the festivals held here throughout the year and they also include some ethic fairs promoted by the various communities in Portland.  These fairs include the Italy Fest and the Chinese New Year Parade among many others. Some festivals are truly unique and unexpected to be found here, for example Sand in the City, a 20-year tradition in Portland that brings a sandy chunk of the Oregon coast to this urban setting, covering the square with sand and sandcastles for three full days in July.  The main day of the event is the first day, when the Sand Sculpture Competition takes place.  Teams representing local businesses and organizations have about five hours to create their sculptures, designed by local architects previously paired up with the contestants. 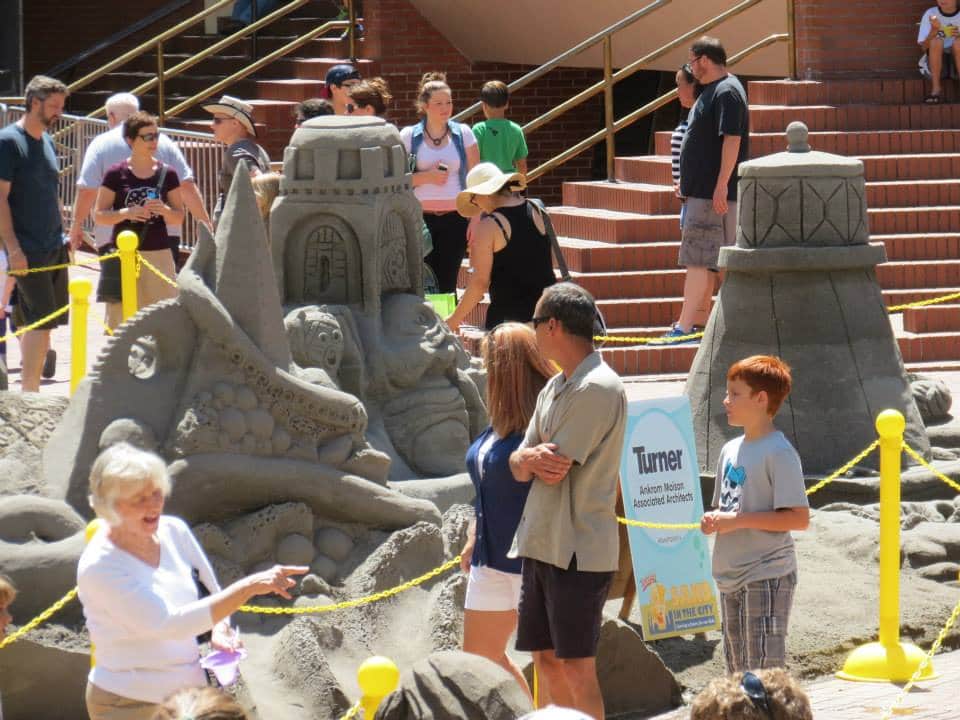 Every year, the city’s Thanksgiving parade, which aims to compete with the one in New York City, ends here and culminates with the lighting of the State’s largest decorated Christmas tree.  During the Parade animal and cartoon balloons march along the streets of downtown Portland among the cheers of children and adults.  Portland is a very lively city but its heart definitely beats in Pioneer Courthouse Square. 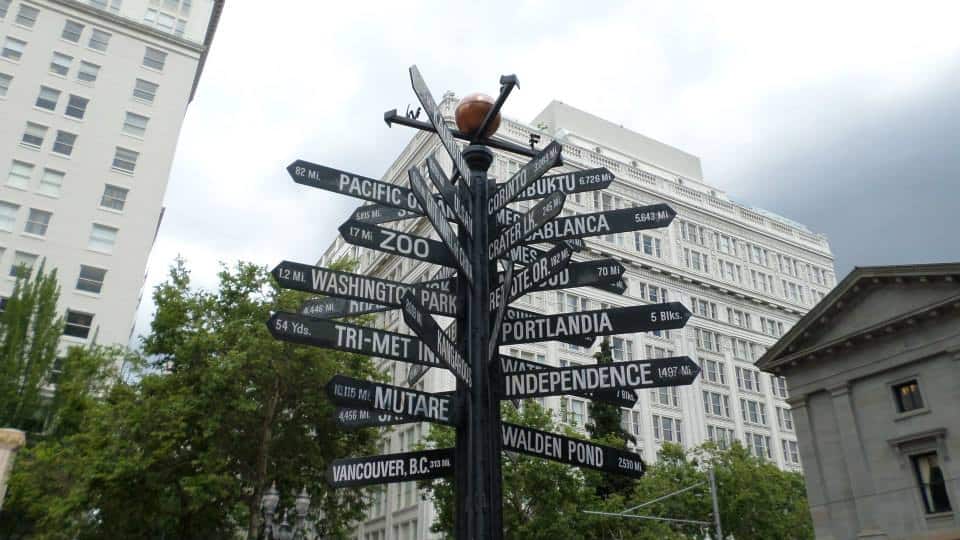