Since the ‘80s, Portland has been the place to be for all those people who like craft beer. Portland, with its 65 breweries and counting, presents more beer crafters than any other city on earth and it’s often referred to as the Beer Capital of the World.   From a recent US survey it also seems that Portlanders consume more beer than anybody else in the States and all these reasons justify the city’s nickname: ‘Beervana.’  All breweries in Portland experiment with flavored ales (coffee, honey, berries, bacon or even squash among them), local ingredients, seasonal offerings and innovative brewing techniques because the beer market in the city is highly competitive.  Some breweries target a specific group of drinkers (some beers are created gluten free for people who suffer from celiac disease) or non-alcoholic drinkers (many beers are alcohol free).   Beer Row is a street where breweries and brewpubs are located just within walking distance from one another and it’s located near the city center, just east of the Willamette River.  The Oregon produced ales made here are available for tastings and for sale on site but are also sold and exported nationwide and worldwide.  Frequenting brewpubs is a part of the Portland culture and it’s a must try for anyone visiting the area.   Each brewpub usually offers over 50 types of draft beers, mostly locally crafted ones.   Portland’s brewpubs are almost always family-friendly and many of them even offer a play area for children and sometimes a dog park.  All of Portland’s brewpubs serve food, which varies from simple fare such as pizza or hot dogs to full 4-course meals.  Very often the food is organically sourced and homemade.  Microbreweries usually care about the food they serve just as much as the care about crafting the perfect beer because Portland is considered a foodie town and Portlanders are passionate about eating well. 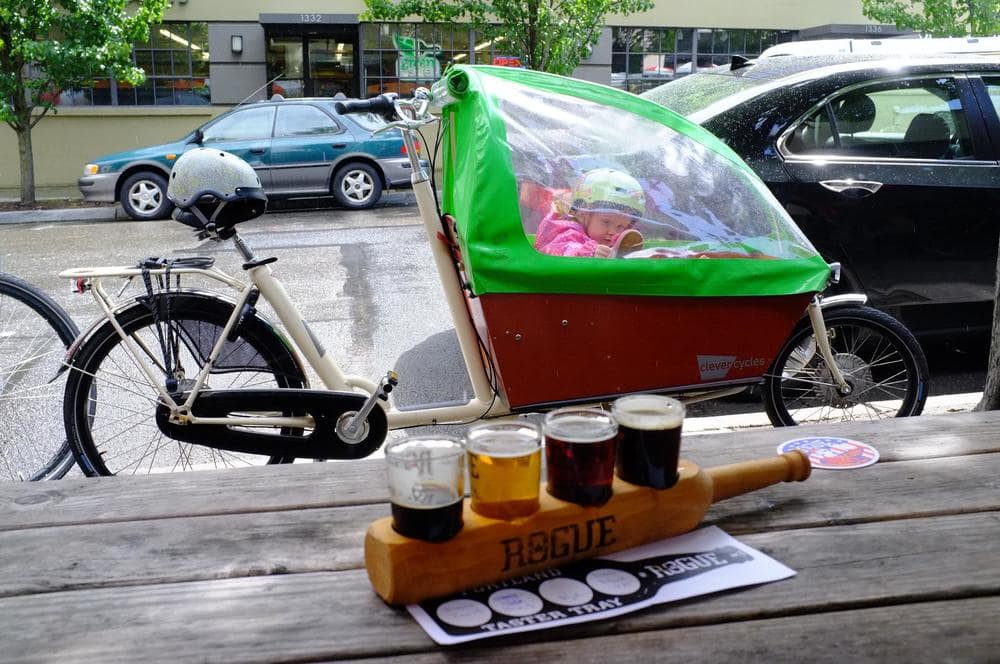 Most brewpubs offer tasting trays and are family-friendly venues
In addition to offering more beer crafters than any other city in the world, the city’s calendar overflows with beer-themed events which happen year-round in Portland, such as the December’s Ale Festival which takes place in heated tents at the Portland's Pioneer Courthouse Square. Portland also annually hosts the biggest beer festivals: the Oregon Brewing Festival, the Spring Beer and Wine Festival, the Portland’s International Beerfest and the Vegan Beer and Food Fest. During the Oregon Brewers Festival, the banks of the Willamette River, with the Portland skyline as a backdrop to the west and Mt. Hood to the east, become the perfect setting for a huge five-day event which welcomes more than 85,000 visitors.  During the OBF, more than 80 breweries from all over the country compete and sell their products to a multitude of people and try to gain the prize of Best Brewer of the Year. The Vegan Beer and Food Fest is a truly unique event which features the best of the region's vegan craft beer, ciders, and vegan fare. At this festival food carts, stalls, street vendors and local restaurants sell food, beer and craft goods accompanied by live music and competitive group games. 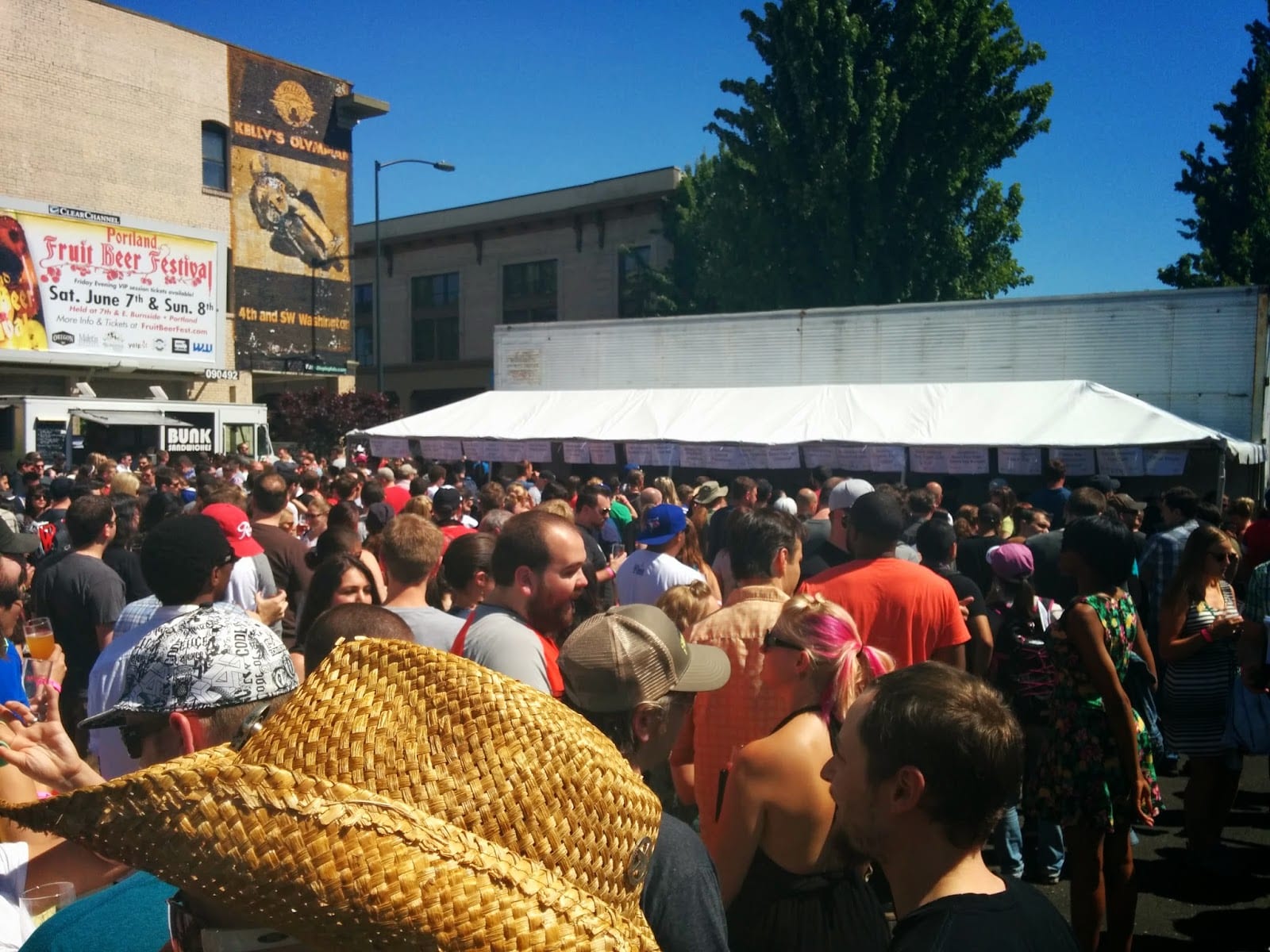 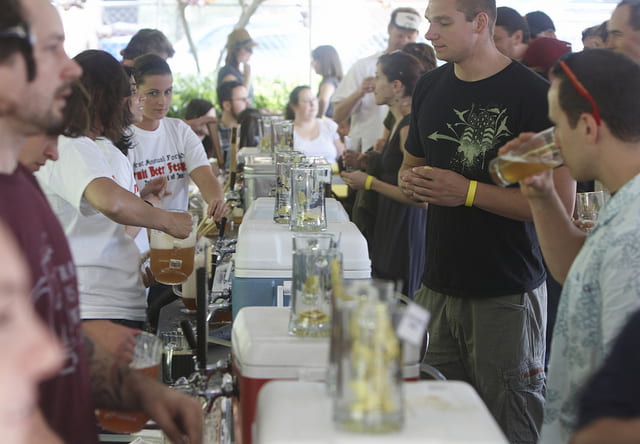 Beer festivals in Portland occur monthly
Portland’s beer scene began in 1984, when both the Bridge Port Brewing Company and the Widmer Brothers Brewery were founded.  Both brewing companies now offer daily tours of their facilities and beer tasting sessions. The McMenamins brothers opened their first brewery the following year and now own more than 50 historic locations across the Northwest, each unique in its kind, but all serving the same McMenamins beers. In the 1990s, a series of newcomers helped keep the city’s beer scene fresh.  In 1993, Lompoc Brewery was founded and the following year the Lucky Labrador Brewing Co. opened to the public (and to their dogs, thanks to a dog-friendly beer garden). Hopworks is a unique brewpub which is 100% powered by renewable energy and its customers can help generate the building’s electricity by pedaling on two stationary bikes placed in the middle of the pub. A favorite Portland hangout, the Gigantic Brewing Company, strives to make the best IPAs in the city.  The Ecliptic Brewing Company, one of the newest additions to the Portland’s beer scene, combines the owner’s two passions, brewing and astronomy, in a celestial-themed brewpub which offers unique beers named after stars and constellations, all paired with a rich food menu which rotates with the astrological calendar. Some other breweries in Portland specialize in European-style beers and offer tours to the public to explain the manufacturing characteristics of German, French and Belgian beer making. Many brews tend toward classic European styles, like cream ales and stouts, just like at the Upright Brewery, a hidden gem in the local beer scene. Its basement-level beer tasting room proposes a seasonally rotating menu which offers new ingredients at every batch. If you don't want to just sit at a pub or attend a tour, there are several beer-tour companies which offer beer bus tours (with tours in several languages including Japanese) and the You-Pedal tour, a sort of 12-person pedal-powered bar with stools. 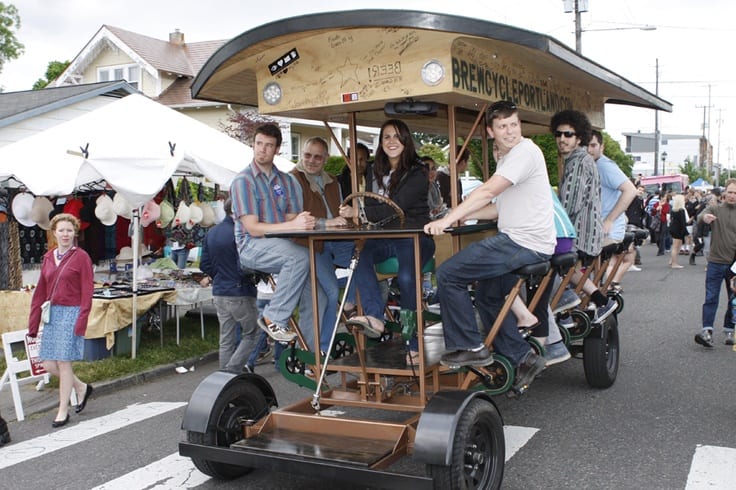