Just a short distance away from Portland is Seattle, a city that was founded in 1851 by white settlers and which soon got to be considered the ‘capital’ of the North Western region of the USA. Portlanders like to visit Seattle because it’s the biggest and liveliest city in the North West and the closest hub for international long-haul flights. But besides coming here to shop or to take a flight, Portlanders also like to visit the city because it abounds with events, concerts and exhibitions.Seattle is known as the City of Rain although I personally doubt it can rain here more than in our Portland and sometimes it’s also known as Jet City because the multinational Boeing was founded here. Seattle is famous for being the birthplace of grunge music and bands such as Nirvana and Pearl Jam come from here. It is also the birthplace of the famous rock guitarist Jimi Hendrix. I learnt all this by visiting the Experience Music Project or EMP, a unique museum designed by the famous architect Frank Gehry which combines interactive exhibits about the history of American music and music memorabilia from famous American bands and singers. The building itself is a masterpiece of modern architecture worth visiting. 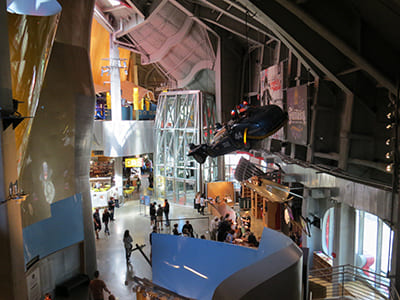 The inside of the EMP musuem
The EMP Museum is part of the Seattle Center which also includes the Children’s Museum, the Pacific Science Center, the world famous Space Needle, an amusement Park, many unique shops and some restaurants.Everybody knows the Space Needle and this tower is generally considered to be the symbol of Seattle.At the top of the tower, a rotating elegant restaurant surrounded by windows offers a gorgeous 360 degrees view for its customers. There is also an observatory at the top from where from to take beautiful photos of the city and, on a cloudless day, it’s also possible to see nearby Mt Rainier, Puget Sound and the Olympic Mountains.It’s possible to reach the Seattle Center by either car or bus but another option is also to get there by boarding the famous monorail, a fast train that goes there from Downtown. 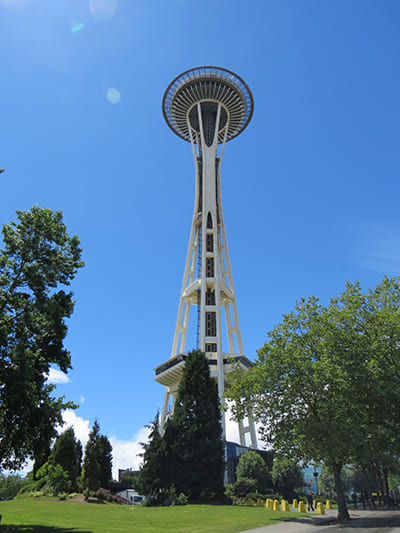 The Space Needle is the symbol of Seattle
An unmissable spot to visit is Pike Place Market that, with its neon sign, is the heart of the city. The fishmongers’ stalls are among the most popular stands of the market because the vendors typically scream whenever a whole wild salmon is ordered by a client and the fish is then thrown from a fishmonger to the other, in a sort of show, before being wrapped for the client.

Pike Place Market is the heart of bustling Seattle 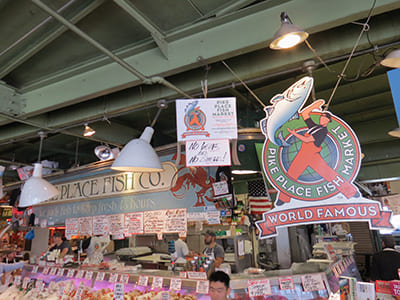 The fishmongers stalls are the most popular
The market is a very popular place for a quick and cheap lunch because it offers many hole-in-the-wall eateries with a variety of cuisines from Polish to Peruvian food.The area behind the market building is full of windows and terraces overlooking Puget Sound (Seattle’s bay) and the waterfront area from where ferries cross the waters of the bay to carry cars and passengers to the islands and nearby Canada.Pike Place, the street just in front of the public market, gets very lively with people, buskers and stalls selling organic produce and this street is also well-known because here one can find the very first Starbucks café. 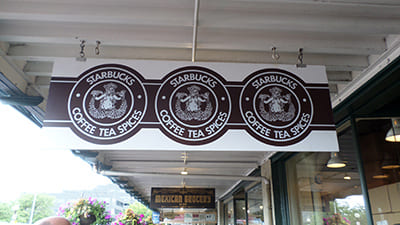 At Pike Place one can find the first original Starbucks café
Just like in Portland, the main square is called Pioneer Square (maybe due to the fact that pioneers discovered the North Western region) and this square, with its red brick buildings, is the oldest of Seattle. Although the area suffered “The Great Fire” of 1889, the restored buildings are over a century old and they now host art galleries, cafes and boutiques. Seattle never disappoints!