Not many visitors to the city know that there is a sanctuary of peace and serenity just minutes away from the bustling heart of Portland and it’s called the Grotto by us locals.Officially known as the National Sanctuary of Our Lady of Sorrows, The Grotto is both a Catholic sanctuary and a botanical garden, built on two levels with a large cliff that naturally divides the two parts. The area around The Grotto used to be an old quarry before becoming an attraction for tourists and religious pilgrims. It became a sanctuary under the auspices of Father Ambrose Mayer, who considered this area a blessed place.The construction of the Grotto began in 1923, the year in which a cave was dug into the cliff wall. After another 10 years, Mayer installed a marble replica of Michelangelo’s Piety on an altar inside the cave, which then became known as Our Lady of the Grotto. This statue is now located at the lowest level inside a beautiful garden accessible by the parking lot. The garden of the statue alone covers almost 8 hectares of land. 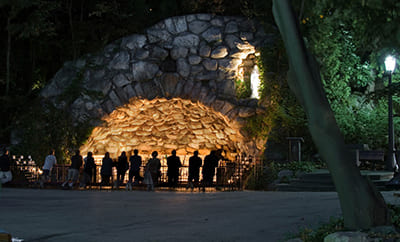 The cave with the Virgin Mary’s statue
When visiting the Grotto you first come across the Welcome Center, where there is a small museum presenting the goals of the Garden and showing the past glories of the Grotto. On the way to the small chapel of the Virgin Mary there are the stations of Jesus, illustrating the life of Jesus Christ with statues. Daily masses are celebrated inside the small chapel which is open to visitors and worshippers alike.Inside the Garden there is an elevator which takes you up to the second raised level and which is built along the cliff offering amazing views of the nearby mountain range. On the second level one can find one of the largest green areas in Portland. Strolling along these well maintained trails is one of the most relaxing things to do in the city with its azaleas beds and autochthonous plants. The most amazing attraction of the park is the Chapel of Meditation, a small church made up entirely by glass walls, whose architecture was awarded and considered to be the best modern architecture in the North West. The Chapel is nestled on the north wall of the cliff and since it’s completely transparent from the inside of it one can have a gorgeous view of the surrounding area and, on a clear day, see as far as Mount Hood and Mount Sainte Helena in Washington State. 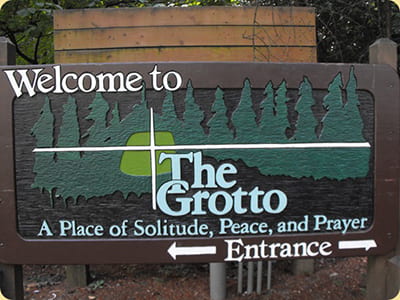 The entrance sign of the Grotto
Besides being a great place to visit to get away from traffic and routine, The Grotto functions as a center for people in need, offering spiritual counseling, shelter and religious orientation for whomever needs it. Although the Grotto is beautiful year round, during the Festival of Lights, held in the months of December and January, the place becomes particularly popular because a live nativity play is staged here every night from dusk to closing time. During this celebration – which is called the Festival of Lights because 500,000 lights are lit in the gardens during this time – the park hosts many events including choral performances, classical concerts and spiritual events to prepare for a positive New Year.Real people play the roles of the Holy Mary, Joseph, the shepherds and other characters in the nativity. Most visitors arrive on Christmas ‘Eve night when a real baby is brought to the nativity scene to play baby Jesus and also the night of January 6th is very popular among Portlanders because the arrival of the Three Kings is staged with three volunteer actors bringing gifts to baby Jesus. During this time, some friendly animals are used in the nativity play, such as sheep, chickens, a donkey, an ox and even some camels so the Grotto becomes a small petting zoo making it a great attraction for children as well. 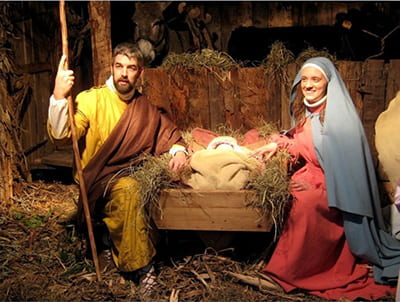 Live Nativity play at the Grotto
Although the Grotto was once born as a Christian Mecca, people of all religions and backgrounds visit it year round and during the Festival of Lights because it’s a true spectacle for the eyes and a place of peace and tranquility.