If from downtown Portland you head north towards the Cascade Mountains range, the panoramic Cascade Lakes Highway will take you to the summit of Mount Hood in just over an hour. Mount Hood is a magnificent mountain which becomes even more gorgeous when it’s snowy. Thanks to its size and height, it is well visible from all hills around Portland and from the south-east side of the city and not everyone knows it is an active volcano. It’s what is known as a stratovolcano, a term which describes a cone-shaped volcano composed by many layers of volcanic ash, rock and lava that has hardened over centuries. Mount Hood is considered a dormant volcano but it erupted once at the beginning of the 20th century. It is a hugely popular destination for climbers and hikers and it has become a top ski destination for Oregonians and visitors from neighboring states. 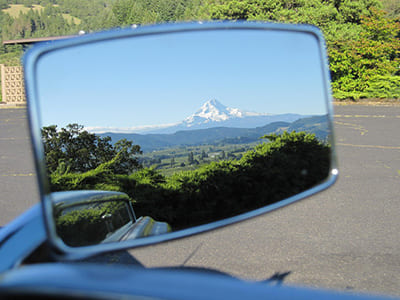 Mount Hood is a short drive away from Portland
Mount Hood is the second highest elevation in Oregon state with its 3,400 meters and, on rare but amazing clear days, from its peak, you can enjoy a breathtaking panoramic view of the forests and lakes that surround the mountain. A forest of Douglas fir covers much of the lower elevations, supported by a lush vegetation of rhododendron and berries bushes. More than a dozen waterfalls brighten river valleys that lie in the shade of its deep forest which is inhabited by marmots and brown bears. There are warnings on all the trails in the park and near the lake regarding the bear population but these bears are not particularly dangerous to people but they are always on the look-out for unattended food and picnic baskets, especially during the cold months when food runs low at this height. 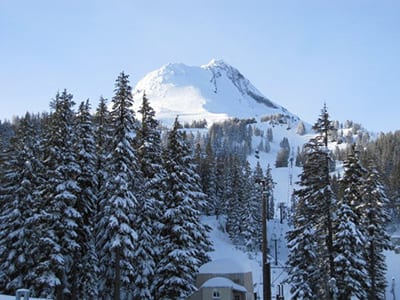 Mount Hood is a popular ski destination
On top of majestic Mount Hood is the Timberline Lodge, a National Historic Landmark located in the Mount Hood National Forest. This remote mountain lodge served as the Overlook Hotel in the outdoor shots of the Kubrick’s movie “The Shining” and its facade was meticulously reconstructed in the grounds behind the Studios in Hollywood in the 80’s when the movie was shot.In the movie, the characters were trapped here after a snowstorm; Mount Hood receives indeed an incredible amount of snow from November to March which often makes it difficult to reach the area in spite of the many efforts to keep the roads clear and safe. 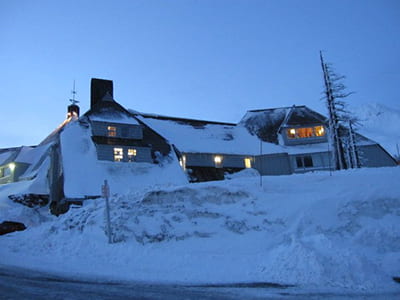 Timberline Lodge under the snow 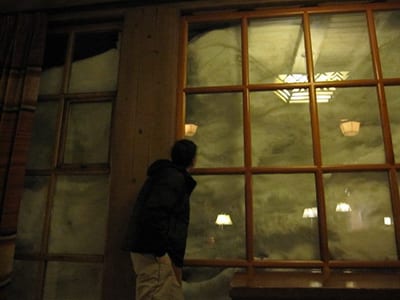 Snow blocking the windows at Timberline
If you are neither a fan of Kubrick’s films nor a skier you can still enjoy this place. The Timberline Lodge is open year round and its restaurants offers magnificent views of the surrounding area and a marionberry pie to die for. Marionberries are wild fruits similar to blackberries which grow exclusively in bushes in the Oregon woods surrounding this mountain. They are bigger and sweeter than blackberries and surprisingly seedless. The marionberry pie is a typical and unique Oregon dessert which can only be prepared in this State because these fruits grow only here and they are not yet exported elsewhere.A century ago, the wild region around Mount Hood was inaccessible and inhospitable and it disappointed the dreams of many settlers, who arrived via the Oregon Trail in search of fertile land and then went on towards the coast. Today, this area is an accessible destination year round and the lake at its feet is a perfect place for fishing and swimming. Mount Hood is a major destination for skiing, hiking and other types of tourism. There are six mountain ski facilities and hundreds of well-marked hiking trails that offer loops encircling the area. Mt. Hood is a perfect place for a romantic retreat or a week-long vacation but Portlanders usually come here just on weekends and drive back on the same day or sometimes stay overnight at the lodge which is the only accommodation available on the summit. 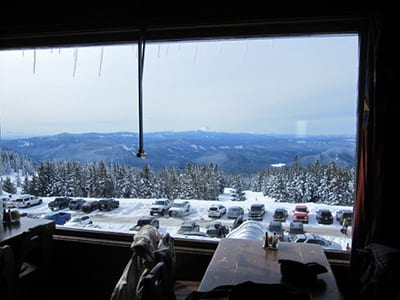 View from the Timberline Lodge’s restaurant 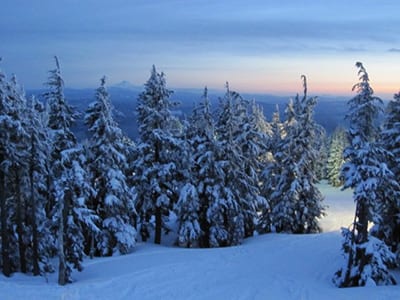