Oregon is known as the State of the beavers and everyone knows it rains almost 10 months a year in this region of the US. Among Americans the image of Oregon is that of lush forests, snow covered peaks and abundant rivers and not many people can imagine that this State has another dry and arid side to it.Oregon is indeed divided into two completely different parts: Western Oregon and Eastern Oregon.The dividing line is the Cascade Range, a massive mountain range of volcanic origin that runs parallel to the coast. Even though the Eastern part is much more extended than its Western counterpart, the majority of the population lives in Portland, Eugene or Salem or on the Pacific coast in the West, allowing the Eastern side to remain mostly wild and untouched.While the Western side of the State is green and wet, the Eastern side is characterized by drought and desert moorlands.Strangely, this difference doesn’t only have to do with the geographical characteristics. While historically Western Oregon is politically considered to be a ‘blue State,’ meaning a Democratic State, Eastern Oregon is predominantly ‘red’ or Conservative and the demographics are quite different as well because in Portland and the coast one can find a good ethnic variety of people, while the Eastern towns are mainly inhabited by ‘white’ Americans. The Painted Hills are considered the main tourist attractions of Eastern Oregon and they are a magnificent work of art by Mother Nature and also a perfect place where to study geology and geography.The name comes from their amazing colors which appear hand-painted with an artistic quality and they seem almost unnatural and surreal.Such colors of the layers are derived from volcanic ash deposited here during ancient times, when the area was a flood plain with a hot tropical climate and over time have fused together with minerals resulting in these unique shades.

My visit to the Painted Hills
The Painted Hills with their amazing colors that make them resemble giant colored sand castles, are a paradise for painters and landscape photographers. The chromatic show changes according to the time of day, due to the incidence of solar rays, and also according to the season. On sunny days the amber, orange, yellow and gold hues get combined with black and gray streaks at their very best.Their green, gold, black and red colors are fascinating at all hours of the day, but the best lighting for photography is in the late afternoon because light and humidity changes can greatly affect the tones and shades of the hills.Their black color is due to the lignite and coal present, the gray is limonite and shale, the red and the orange colors come from the laterite and the burnt soil which formed when the area was hot and humid and the green spots are shrubs growing on top of the rock. The hills are located in the John Day Fossil Beds National Monument, about 10 miles from the town of Mitchell. It’s only possible to come here by car and there are no facilities available, only trails for hikers and lots of wildlife.Visiting the John Day Fossil Beds, one of the richest fossil sites in the world, it’s like going back in time 44 million years and discover the ancient ramparts of the first inhabitants of Oregon. 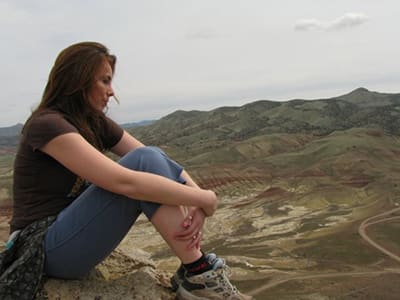 The Painted Hills are a paradise for photographers
Lovers of archeology can browse in the local excavations sites or learn by observing the incredible amount of extracted findings by archaeologists in the formations included in the area which is now a national park. Several fossils were found here and are now collected in the visitor center together with remains of prehistoric animals such as the three-toed horse, the saber-tooth tiger and the prehistoric dog.Nearby flows the John Day River, one of the longest rivers in the United States without embankments, which makes it a paradise for rafting without interruptions. This waterway offers stunning views and is suitable for relaxing excursions for those who want to camp, go fishing or bird-watching.There are several picnic areas inside the park but no camping facilities in order to preserve this wilderness. The camping sites are located on a bend of the John Day River, where there are also very good spots for river fishing and picturesque trails for mountain biking.