Sauvie Island is located north of Portland and it’s considered to be Portland’s ‘beach.’The closest ‘real’ beach area is the Oregon coast but Sauvie Island’s beaches are sandy river banks that can be a good spot for a picnic out of town or to play outdoors when the weather is clement. With varying degrees of accessibility, Sauvie Island’s five beaches offer visitors the opportunity to embrace warm, sunny days on the Columbia River. The biggest one is perhaps Collins Beach which is so huge that you are certain to relax there without interferences by noisy ‘neighbors’ since there is room for everyone. Most Portlanders come here on weekends to read a book, fly a kite or a drone or to walk their dogs; animals are allowed if kept on a leash and cleaned after.The rough, river beaches of Sauvie Island are primarily used for sunbathing and rarely for swimming because there are no lifeguards on duty, nor equipment rental shops. Bathers usually bring their own chairs, sun umbrellas, fishing rods and sports equipment from home. A few restaurants can be found on the island but none near the beaches. Portlanders use the beaches in the spring or in the summer and they pack a cooler with snacks or plan a picnic beforehand.The beaches are only populated during the day because according to the law, bonfires and overnight camping are illegal near the ocean. Only one, two-lane bridge provides access to the island’s beaches and to get there from Portland, you need to take a Highway which will end at the entrance of the Sauvie Island Bridge. Once on the island, it’s necessary to buy a parking permit to park legally at the beaches and around the island, a sort of toll fee or access fee if you prefer. By continuing along Sauvie Island Road for about 2 miles, you’ll pass by old farms surrounded by fruit fields. All these farms are family owned and managed and, while some produce fruits and vegetables for personal use, most of them are organic-certified farms that sell their produce to their visitors or to local markets such as the Saturday Market in Portland. A few of these farms are so called ‘U-Pick farms’ because visitors are given a basket or a small cart and they are taken by tractor to the fields where they can literally pick their own fruits and vegetables of choice and sample for free (with moderation) the produce seasonally growing in the field. 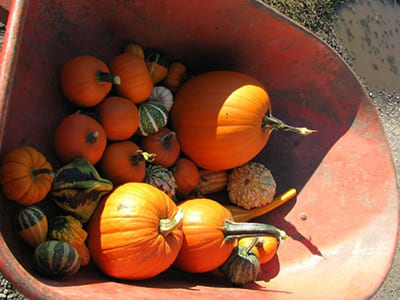 The pumpkins I picked with friends in the field
Located on this picturesque island, these U-Pick farms were conceived in the late ‘90s to attract visitors and tourists to the island which couldn’t live off agriculture alone. The first farm that opened had a strawberry field which now became a lot bigger and offers over fifteen different types of berries and covers over eighty acres of land. Some of these farms also offer U-pick flowers and pumpkins during the spring and fall periods when the strawberries are out of season. 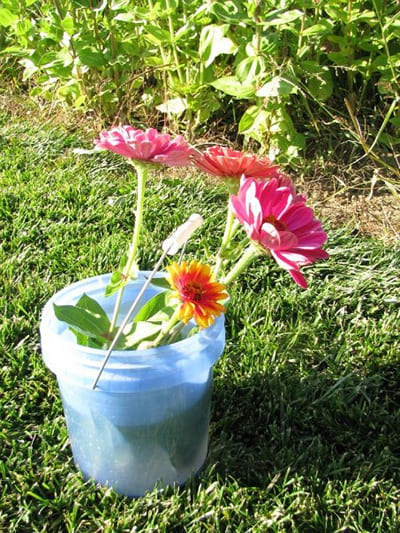 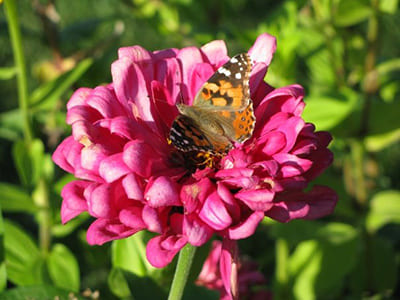 Flower season at the U-Pick farm 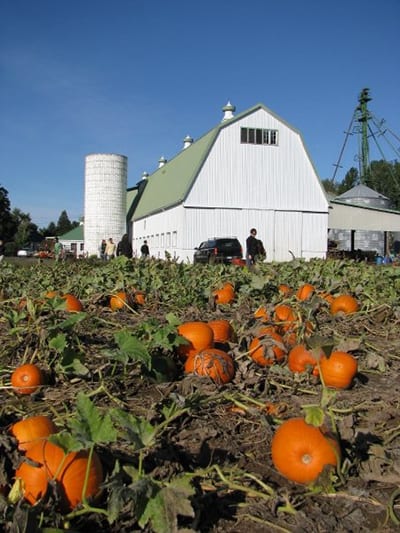 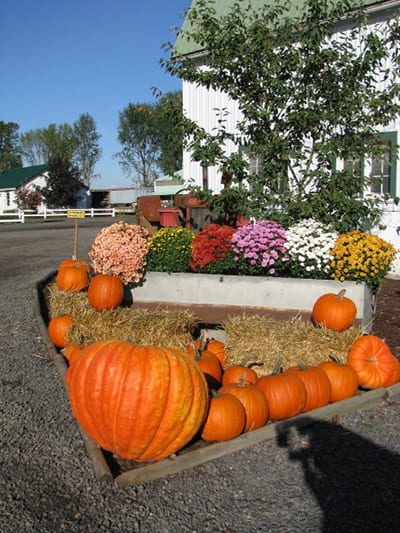 Pumpkin season at the farm
Many events are held at the farms year round and they follow the Harvesting Calendar which is published at the entrance of Sauvie Island and which includes a list of the farms, their produce, their harvesting months and the events organized by each place.Some local favorite events are the Huckleberry Festival, the Pancake Baking Competition and the Lavender Market. The first event is the best chance you have to visit the island and stock up on all your huckleberry favorites. Along with fresh-baked huckleberry pies, the farm produces huckleberry jam, candies and honey and frozen huckleberry pies. Inside the farm’s ‘café’ they serve cups of hot huckleberry apple cider and creamy huckleberry milkshakes you can drink while sampling the pies.During the Pancake Baking Festival there is a competition between local farmer ladies to see who can bake the yummiest pancakes. Such pancakes are sold to the visitors who act as judges by sampling these goodies. For this occasion both common and unusual ingredients such as blueberries, marionberries, huckleberries, walnuts, honey and even almonds are used to make the pancakes on the menu.The Lavender Market takes place around the island when different stalls sell flowers and flower extracts. The island turns purple at this time of the year and every season has its color on Sauvie.