Although a variety of foods from around the world can be enjoyed in Shanghai, traditional Chinese food is still my favorite. Just the other day, I went to a Chinese style restaurant that my friend who lives in Shanghai vouched for. Needless to say, the food was delicious and they even had a chic interior, all of which I found very impressive. 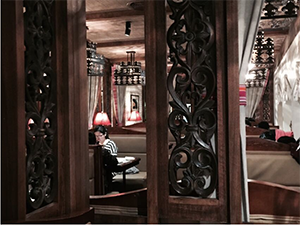 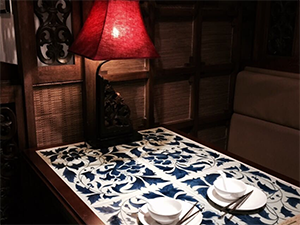 The restaurant was very lovely, with interiors that made me feel as if I had been taken back in time to Shanghai of the 60’s and decorations that expressed a distinct Chinese flavor. Chinese cuisine can be found in Japan too, but this experience was such that it made authentic Chinese cuisine eaten in China to seem completely different. Well, let’s get into a brief explanation about Chinese cuisine. Chinese cuisine differs by region and can be roughly divided into eight types. There is the salty Lu cuisine that originated in Shandong Province and the spicy Szechwan cuisine of the Sichuan Province that uses spices such as chili peppers and Sichuan peppers. In contrast, Su cuisine of the Jiangsu Province is characterized by fresh, sweet flavors, Yue cuisine of the Guandong Province is lighter tasting to bring out the original flavors and colors of the ingredients, while Min cuisine of the Fujian Province is characterized by a mix of sweet and sour with salty flavors. Hui cuisine of the Anhui Province is characterized by strong flavors that use relatively more oil. Xiang cuisine of the Hunan Province uses deep flavor with sourness and chili pepper spiciness, and is also well known for their pickled vegetables. Zhe cuisine of the Zhejiang Province has a distinctive strong flavor that uses soy sauce for the base seasoning. Such diversity is distinctive of a large country like China. There are a rich variety of cuisines, and when we divide the above cuisines more specifically, there are actually twice as many types of cuisines.
[caption id="attachment_463" align="aligncenter" width="300"] 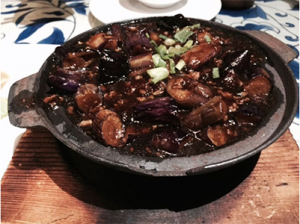 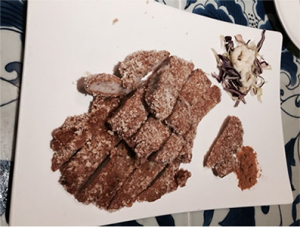 Deep-fried cutlet[/caption]
The restaurant I visited this time serves Xiang cuisine and Su cuisine. I ordered my favorite eggplant braised in soy sauce and their deep-fried cutlet. I especially recommend the braised eggplant (literally “red-cooked eggplant”). Its combination of deep flavor mixed with just the right amount of sweetness results in a superb dish! The deep-fried cutlet, with a crispy palate of the batter and moist pork, differs slightly from the Japanese version. Eat it with the powdered chili peppers that come on the plate for an even better experience. I was struck with renewed appreciation for the deepness of Chinese food culture. My friend has been inviting me to take on the spicy Szechwan cuisine next, and I’m already looking forward to it since I enjoy spicy food as well.