Spring Festival (written 春節, chunjie), considered the largest event in China, is soon approaching. Throughout the city, people are rushed in preparation for the celebration of the New Year, and a festive mood begins to engulf the entire city. This year’s Spring Festival lasts from February 8 through 22, and will be celebrated on a grand scale not only in Chiba but also in the countries of the Chinese cultural sphere, as their most important national holiday.Spring Festival refers to the New Year on the lunar calendar, and is called the old New Year’s Day in Japan. As suggested by the name, it is the first day of spring. The term guonian (written 過年; guo means pass and nian means year), not Spring Festival, is used more commonly in everyday conversation.Do you know what the traditional food eaten during New Year’s (New Year’s Eve) is? Yes, the answer is dumplings. Pan-fried style dumplings are common in Japan, but boiled dumplings are common in China. For reference, pan-fried dumplings in China are called guotie (鍋貼; means pot stickers).In the northern region of China, it is custom to make dumplings together with your family every year on New Year’s Eve, and it’s also considered a very important family activity. To eat dumplings is associated with family harmony, joy and good fortune. In particular, the yuanbao dumplings (written 元宝餃子, yuanbao jiaozi) eaten during Spring Festival is said to bring prosperity because their shapes resemble that of China’s old coin called yuanbao. 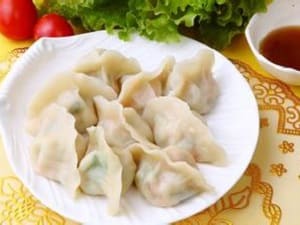 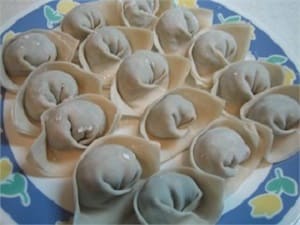 There are lots of other foods associated with good fortune.Like the dumplings mentioned above, fish dishes are an absolute necessity during the Spring Festival period. In Chinese, the word for fish (written 魚, yu) is read the same way as the word ‘余’ (yu), meaning a good harvest. The dish is packed with the desire for the year to bring their life prosperity and abundance. In the southern regions, there is a special way in which the fish is eaten . First, the flesh is eaten, and then the head and tail end left until the following year, to represent a wish for peace to last from the beginning of the year to its end. 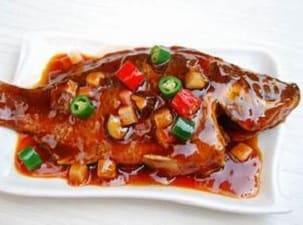 Like the dishes above, classic dishes using plenty of meat including chicken, duck and fish adorn the dining table during China’s New Year holiday. Since the sound of the word for chicken (鶏, ji) is similar to ‘吉’ (ji, means good luck), chicken dishes symbolize the wish for good luck in all things, and since the word for red (紅, hong) is pronounced the same as ‘鴻’ (hong) as in ‘鴻運’ (hong yun, means good luck), red meat also symbolizes the coming of good luck.Just like the soba noodles eaten on New Year’s Eve in Japan, noodles or bean-starch vermicelli are similarly eaten in China. Their long, thin shapes represent their wish for long and consistent stability in endeavors of both work and life, as well as their wish for a long life.