So, what exactly is attractive about living in LA? Well, in the words of my friend Ashley Atkinson, Planning and Housing Specialist at the LA Mayor’s Economic Development Office, it’s the fact that: “If you want to be with the celebrities, if you want to have an urban life downtown, if you want to be suburban in Pasadena, or whatever you want to do or experience, it’s here.” (Interview for American Planning Association California Chapter Los Angeles） I only moved here at the back end of 2012, but even after just three years, I have been completely charmed by LA. And it seems that Downtown Los Angeles (DTLA) has seen some especially dramatic changes in the past five or six years. DTLA is now a place of increasing economic inequality, with a huge gap between rich and poor. At the bottom end, the chronically homeless population now exceeds 12,000. Meanwhile, at the top end, newly-built condominiums can be sold for anything between $600,000 and $2 million. Furthermore, although the new luxury housing was supposed to regenerate the city center, the opposite seems to have happened. The purchasing power to buy such housing lies not with the LA locals, but with wealthy Chinese and other foreign investors, leading to concerns that absentee owners might turn DTLA into a something of a ghost town. It is ironic indeed that a project intended to prevent the opening up of an inner city void might actually end up accentuating the so-called Donut Phenomenon. And so, to counter this problem, DTLA has now turned to art to boost local economic development and so-called “placemaking.” The latter term basically means putting yourself in the shoes of the people who use public spaces, and delivering small improvements that encourage more people to visit those spaces, thereby transforming them into bustling and lively areas. Thus, all around downtown do we see utility boxes used as art canvasses to showcase the painted works of local LA artists. The plan, thought up by Los Angeles City and the local community, not only aimed to provide a public gallery for the artists, but to use the art for placemaking; to welcome visitors from the suburbs with something visually interesting. 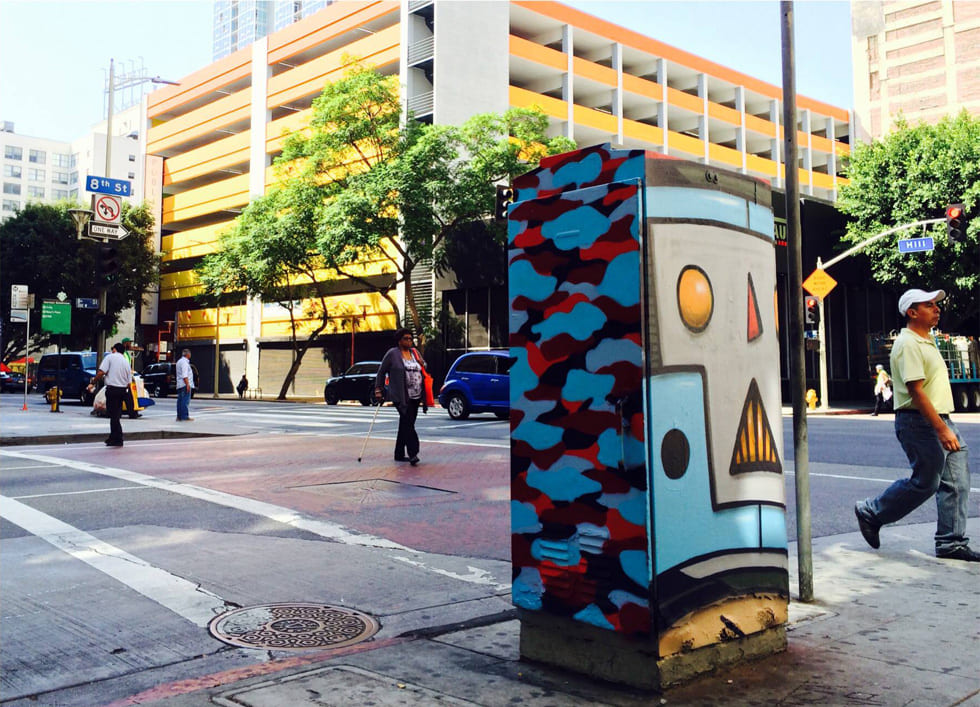 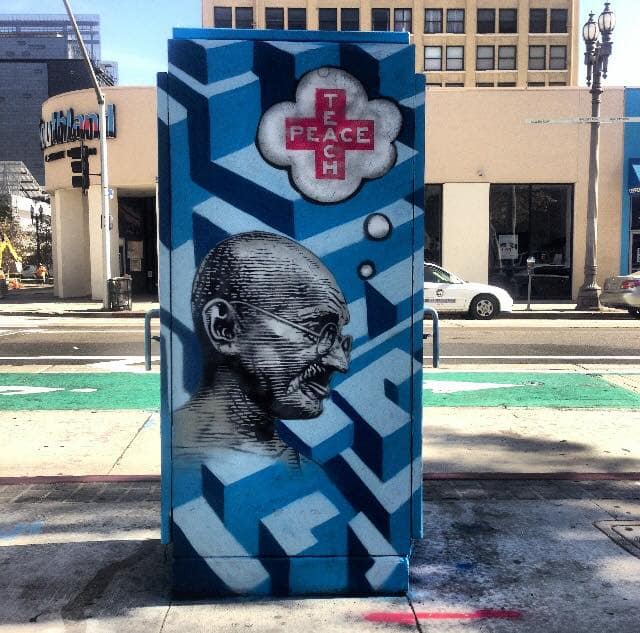 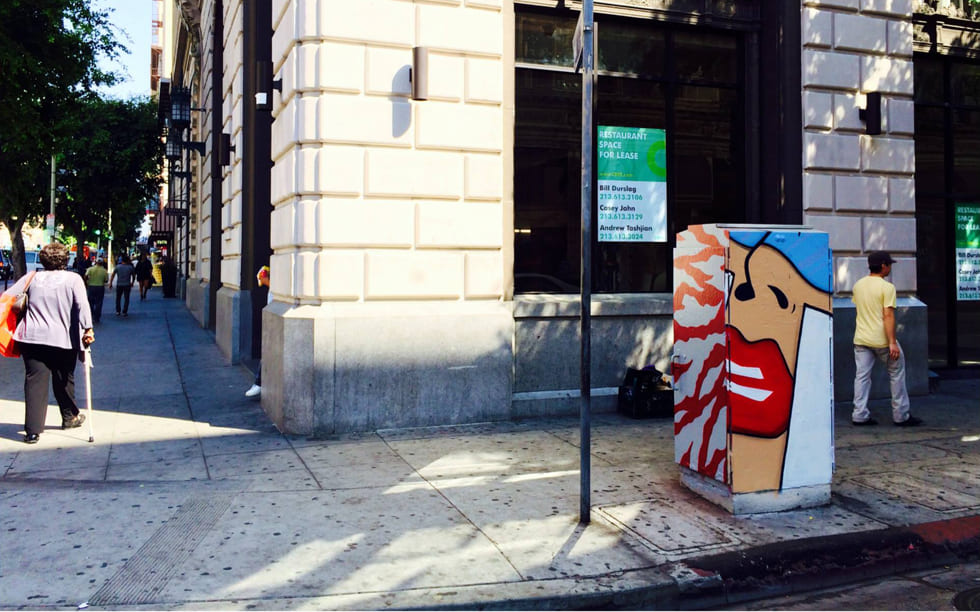 The project was also actively assisted by my husband, a former planning director at city of Los Angeles council office , and has made an important contribution to regenerating DTLA through street art. My husband also serves as a board member of the DO ART FOUNDATION, which provided mural art for the Whole Foods Market, a leading organic and natural foods supermarket which opened in DTLA in November 2015. The mural was painted by the Italian street artist 2501 (real name: Jacopo Ceccarelli) and measures an impressive 32m x 5m.
2501 Never: Mural: Eighth & Grand from Do Art Foundation on Vimeo.
There are even some “street art tours” which take in the top-quality artwork on the downtown streets, allowing greater numbers of suburban dwellers to sample parts of DTLA they had never previously set foot in. The Mural Conservancy of Los Angeles, for example, staged a guided mural tour in tandem with this year’s LA ART SHOW, the modern and contemporary art exhibition held at the LA Convention Center from January 27th-31st. Against such a backdrop has more emphasis come to be placed on cultural tourism as a means of transforming DTLA into a hive of activity, treasured by ever-greater numbers of local Angelinos.

I moved to the U.S. in 2003. After graduating from the University of Oregon, I worked as a certified U.S. accountant conducting audits for one of the Big Four accounting firms .I currently work as the manager of the finance department at a visual media company.My hobby is studying writing skills. I will talk about what I learn and enjoy about the lifestyle in Los Angeles.