During the late spring and early summer, you start to see signs posted at the entrance to cafés or on the counter next to the coffee machines. They’re just regular letter-sized pieces of paper with the phrase “Há Caracois!” written on them. Sometimes they’re accompanied by a drawing of a snail. The signs are saying that the café has snails available. 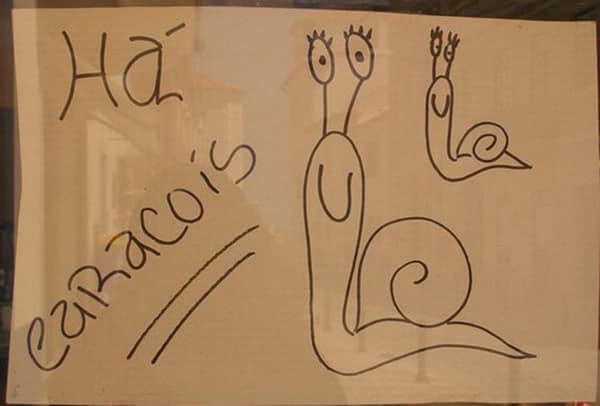 Everybody goes to cafés to eat snails this time of year. They’re extremely simple to eat. When you order them, the café places a huge pile in a bowl. You then use a toothpick to spear the heads peeking out of the shells and pull the animal out. People who find it too troublesome to pull each one out with a toothpick just stick the heads in their mouths and suck them out that way. It doesn’t make the nicest sound, but they sure are delicious. Snails are also a regular fixture at village festivals this time of year. It’s a typical streetside comfort food, like takoyaki (octopus dumpling) in Japan. They go great with beer, and there’s nothing like sopping up the juice that collects at the bottom of the bowl with a piece of soft, chewy Portuguese bread. As soon as the weather starts warming up, I start impatiently waiting for those “We have snails!” signs to go up.Snails become active during the rainy season, but when it’s dry, they seal themselves up in their shells and place a lid over the opening to conserve energy. That’s the best time to eat them. You can buy snails at the market or produce stands, but out in the countryside where I live, you often see families out collecting snails from the fields. You’ll also hear the old ladies who come to village to sell eggs asking whether they can collect the snails that they see crawling on the walls. If you say yes, they’ll pluck them right from the wall and drop them in their bags to carry home with them. 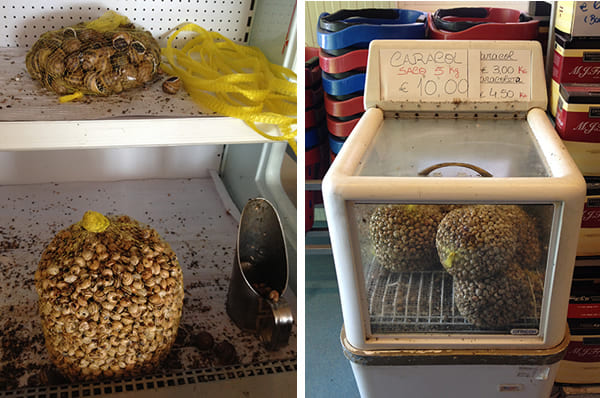 Despite how popular snails are though, they’re actually amazingly difficult to prepare.To start, you have to put them in a net and let them sit there for a week to ten days in order to get them to expel the waste products from their bodies. Some people say that you can speed this process up by making them eat cabbage, and some say you should feed them flour. Once they’ve been sitting long enough, you have to wash them thoroughly. You then put the clean snails into a large pot with just enough water to cover them and add heat. The difficult thing about this step is that you absolutely cannot let the water boil. If the snails get shocked and retreat into their shells, you can’t get them out to eat them, so you have to cook them very slowly in warm water. Another key is to add a little salt to the edges of the pot. If a snail tries to escape, it will come in contact with the salt and retreat back into the center of the pot. Once the snails are fully cooked, you can flavor them with chili pepper, herbs, garlic, and other seasonings. 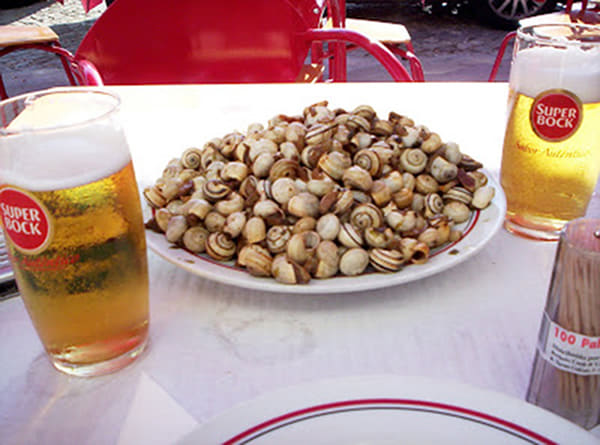 There’s just one last thing I’d like to mention about the snails.They say that Baba de Caracol (snail saliva) is extremely good for your skin—so much so that they sell it as a beauty cream. Interestingly, it seems you can make a weaker version of it at home, and there are instructions online for “homemade snail saliva cream.” A Mongolian friend of mine even said that you can lick a snail in order to cure a cold. I’m not so sure I want to try that one, though…In Japan, most people picture snails slowly creeping along hydrangea leaves, but the snails that live elsewhere in the world aren’t going to last long if they don’t get a move on!

I’m a conservator and preservationist living in Portugal. I specialize primarily in paintings (murals) and gold leaf design, and am involved with UNESCO World Heritage structures as well as the interior of the Palace of Belém. I derive great satisfaction from having close ties to my community in the rural village near the Silver Coast where I live. My hobby is gardening.