One cannot be talking about Scotland without mentioning Scottish whiskey or to be accurate Scotch whisky without an “e” as the Scots refer to it (and they can be easily offended by this oversight!). No matter how you spell it though, whisky/whiskey is the term indicating a type of spirit distilled from a mash of fermented grains. Visiting Scotland you cannot miss a visit to at least one of the many distilleries here to discover the history, the processing techniques and everything related to this liqueur with different characteristics and flavours. 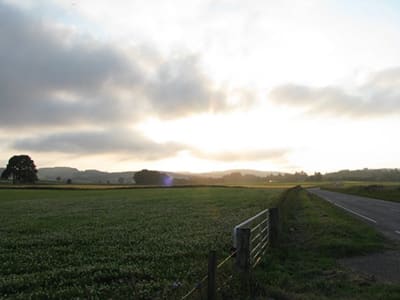 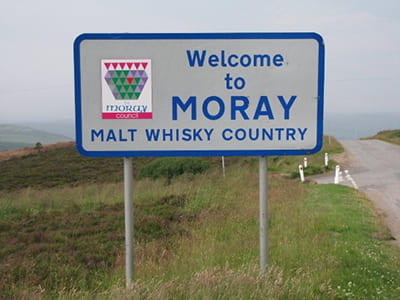 Scotland is usually divided into 4 macro regions when it comes to whisky: Lowlands, Highlands, Speyside and the islands. One of the best pleasures derived from living in Scotland is to be able to take your car and, within a short distance, discover some small distilleries out of the tourist loop.  Sometimes, though, you have to stop and think again and visit the big names, the ones that are usually associated with large retail chains, because they can reserve surprises. This is definitely the case of the Glenfiddich distillery, located in the heart of Speyside, near the quiet town of Dufftown. Dufftown is a town in the middle of the Scottish moorland, located midway between Aberdeen and Inverness. Glenfiddich is the best known brand of single malt scotch whiskey and one of the top selling ones; the fact that you can find a bottle of Glenfiddich on a shelf of a bar even in the most remote corners of the world had always led me to think that the Glenfiddich whisky was a low quality liqueur mass-produced to meet the market demands. The reality is quite different and having toured the distillery and tasted four versions of their whiskey I can safely claim the reason for its popularity is its quality.  Glenfiddich in Gaelic stands for “Deer Valley”, its single malt whiskeys are produced with the classic method and with a mild character much appreciated by the fans, but the distillery also produces distillates with different processes and finishes. Glenfiddich is one of the few distilleries in the region not run by a corporation: everything is still managed by the Grant family who founded this place in 1886 in Dufftown valley, in the same exact place where it stands today.  The distillery is really nice and although some parts are large industrial shacks (necessary given the high levels of production), the visitor centre is organized around the historic core of the distillery made of stone buildings covered with plants and vines. The tour starts from this historic core where a professional guide tells you the history of the distillery and before leading you inside to show you the production of a good single malt, you are shown a video (available in different languages) which illustrates the classic steps necessary for the creation of this product.  I learnt that the stages in the production of a single malt are: - malting - maceration - brewing - fermentation - distillation - aging Before becoming whisky, a barley grain must pass through a series of timed processes. Just like beer and other liqueurs, it seems that whisky originated in closed cloisters, and perhaps this is why the production process, with its times and rituals, has something liturgical. The laboratory where this liquid “gold” is produced is treated more like a sacred place where miracles happen rather than a factory. Like many modern distilleries, Glenfiddich doesn’t have barley fields around and the tour starts from the mill where the mashing takes place and where the sugar is extracted with hot water to get to the final yeast. The best part, however, comes towards the end: while many tourists make their way to the visitor centre to conclude their visit with a taste of whiskey, a friend and I knew that by reserving in advance we could head towards the warehouses where they lead aging experiments with barrels of different origins and characteristics to find new types of aging. The warehouse is gigantic and full of barrels of all shapes and sizes. 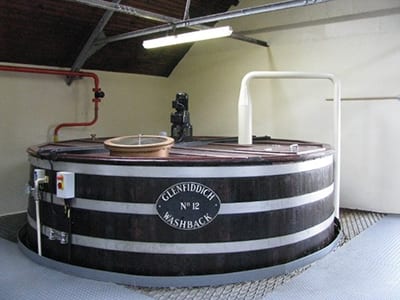 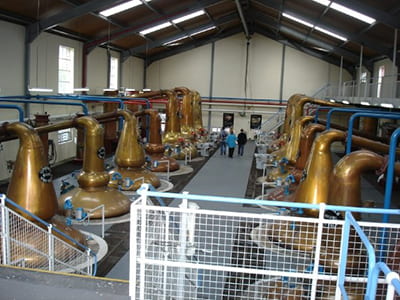 I’m not a whisky connoisseur but being a Scotch whisky drinker I can judge the whiskeys I have tried to be warm, fragrant and very pleasant. Some have fruity notes: pear, raisins and apple mostly. Others have more citrus notes, mostly orange peel.  Although I have focused my attention on the Glenfiddich distillery in this blog I can assure you that each distillery has a shop and a visitor centre and admission is usually free as well as tastings. Most also offer guided backstage tours to show you all the step of the production from malting to bottling and most of these tours are free as well.  The unmistakable aroma which pervades in the laboratories of a traditional Scottish distillery will give you a new appreciation for this craftsmanship and a professional guide will explain the energy and patience that goes into every drop of this aromatic amber colour liqueur.