This post introduces the summer tradition, Christopher Street Day, an event in which sexual minorities parade through the streets. In Japan, such events are typically called rainbow pride or rainbow parade, but in Germany it is called Christopher Street Day or CSD for short. There was an incident in late June 1969 at a gay bar in New York where patrons resisted a police clampdown. Christopher Street Day, takes its name from the street on which that gay bar was located, hold on the last Saturday in June every year as per it occurred in 1969. 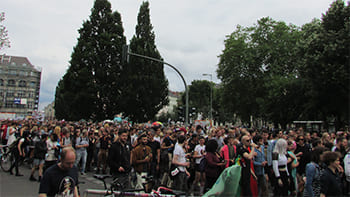 In Germany, the gay liberation movement lagged somewhat behind New York, heating up in the late 1970s. In 1979, the first CSD was held in Berlin with around 450 people taking part. Since then, sponsors including nightclubs have joined as the scale of the event has grown, and it has developed into a commercial parade featuring loud techno music and flamboyant attire. In the late 1990s, a rift occurred among the organizers, and a separate parade that excluded sponsors and stressed political assertions came to be held in the Kreuzberg area. If one were to explain in a word the difference between the two lively parades, the main CSD parade could be called an athletic festival and the Kreuzberg CSD a cultural one.The notation, LGBT is used to describe sexual minorities in media such as Japanese newspapers, but the CSD website uses LGBTI*. The letter “I” refers to intersexual—a condition that is not, in fact, that rare—while the asterisk (*) refers to individuals who do not wish their identity to be limited to any one of those. It projects a sense of extreme caution regarding respect for diversity. 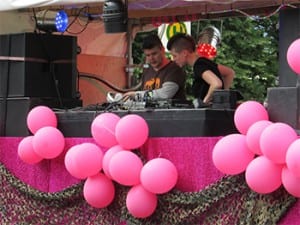 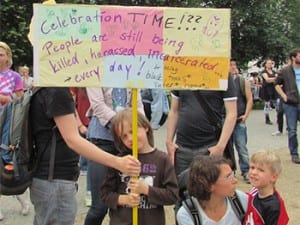 Along with diversity in nationality and culture, diversity in sexual orientation and sexual identity is a crucial element that makes Berlin, Berlin. According to the historian, Robert M. Beachy , The current generally accepted idea regarding understanding of homosexuality, that it is an identity based on an orientation that cannot be denied, was a phenomenon that began in Berlin. Nevertheless, despite the fact that Germany has led Europe in a variety of other issues, it has been slower than other countries to develop legislation for same-sex marriage. Arguments concerning this issue have been rekindled with the legalization of same-sex marriage in Ireland, a staunchly Catholic country. During the parade, there were also placards here and there encouraging legalization of same-sex marriage. 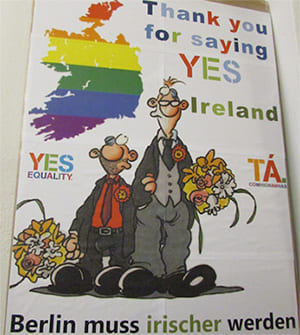 In Japanese society, too, people are gradually becoming more enlightened. The number of visitors to the Tokyo Rainbow Parade this year reportedly reached 60,000, the highest ever. Even so, it is truly in a different league compared to the 700,000 CSD attendees in Berlin. It is apparent from the number of CSD attendees that the event in Berlin is not viewed as a “gay demonstration,” but rather is widely perceived as “a demonstration by all people protesting discrimination against minorities.”