When foreigners visit Japan, they’re surprised at the cleanliness and lack of trash in public spaces. In contrast, people who visit Berlin from Japan notice the amount of trash and how dirty the city is. I suppose it depends on where you are, since high-end neighborhoods, areas with a high percentage of immigrants, sightseeing areas, and business districts in Berlin completely differ in atmosphere and consumption. Even so, the orderliness of the city streets is surprising when visiting other cities from Berlin, so generally speaking, Berlin is a dirty city. 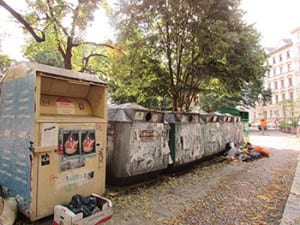 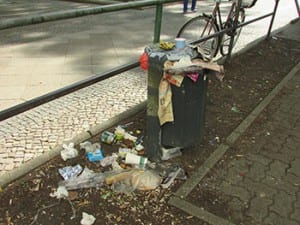 Urban apartments have shared garbage areas in places such as backyards where there are giant, colorful 1100ℓ-plastic trashcans. There are always trashcans for regular garbage (black), recyclable garbage (yellow), bottle collection by color (green), and paper (blue). Lots of times there are also small trashcans for raw garbage (black) and reusable garbage (orange containers). Vegetable scraps and the like are collected in the former and used for biogas power generation, while old clothes, electrical appliances and such are collected in the latter to be resold after being cleaned and repaired. There is an even bigger container placed in grassy areas for garbage such as old clothes, shoes, and glass that makes noise when thrown out. 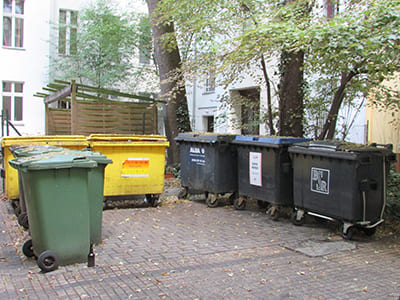 Since the proportion between the recyclable garbage and the garbage to be disposed is quite different from other states, there have been newspaper articles reporting that people in Berlin don’t really separate their trash. In reality, very often trash isn’t properly separated, with transgressions that include throwing regular garbage into the plastic trashcans for paper waste.City garbage collection and cleaning of public spaces is managed by Berlin City Cleaning (BSR). Measures to combat littering on streets can be said to be much better than in Japan. In places such as parks and riverbanks where many people gather, there are large trash baskets about a meter in length, and placed everywhere on city streets are trashcans in signature orange. 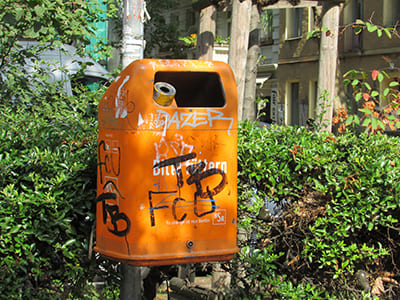 The fact that littering continues despite this likely means that some ingenuity is required to entice people to use the trashcans. In the past, there have been creations such as trashcans that speak when garbage is thrown away, but they did little more than garner some attention. In my own opinion, these trashcans that are commonly called orange boxes should have bigger openings and bodies. These orange boxes are so small that they become full after a single pizza box is thrown away. The next person to throw away trash places it next to the orange box and garbage piles up around it. The opening is small to prevent unlawful dumping of oversized trash, but everyone places oversized trash on the streets anyway, so there’s no need for that measure. 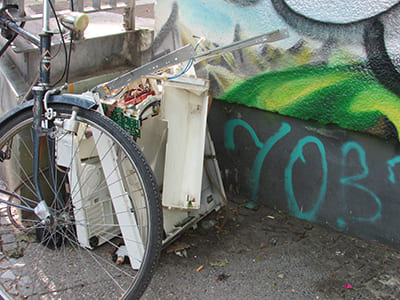 On the other hand, leaving oversized trash on the street can perhaps be called a plus in Berlin. This is because when I was a university student all my furniture except my mattress was taken from trash that was left out. It’s common for items such as furniture, daily necessities, and clothing that are in good condition to be left on the street with a sign saying, “Help yourself.” When I moved and left out things I didn’t need, like old books, clothes, and candles that I didn’t even remember getting let alone from whom, they disappeared so quickly it was fun to watch. 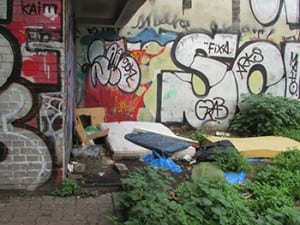 When you come to Berlin, you just might make a lucky find on the street.