Although there are still few vegetarians in Japan, they are not at all rare in Berlin. In Western European countries with a high standard of living and strong interest in ethical issues, there is a particularly large number of vegetarians among the younger generation in cities.Because of this, there are many items sold in the restaurant and retail industry in Berlin targeting vegetarians. 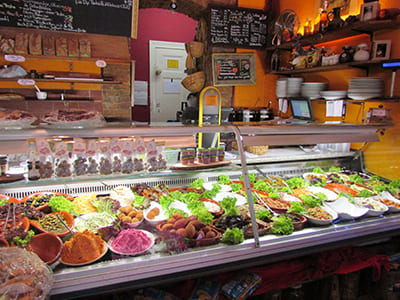 It is said that, in ancient Greece, there were many vegetarians among Platonists but hardly any among Stoics and other philosophers. The strongest motivations to be a vegetarian in the current era are animal rights and bioethics, so there are certain groups that have many vegetarians based on their ideology. It seems that there are many among those in the younger generation with a high level of education and in those in their 30s who have developed some financial stability. If you go to events or demos where lots of young left-wing people congregate, you can even see vegetarian meal distributions. You can figure out the class of vegetarians from the twofold increase in the number of vegetarians over the past 10 years or the fact that completely vegetarian supermarket chains aim for locations in trendy areas with slightly higher rent. Summarizing these points, you may get the idea that key descriptors for vegetarians are “urban,” “left-wing,” and “growing up in the 90s or later.” 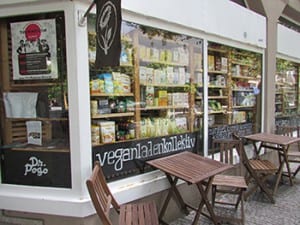 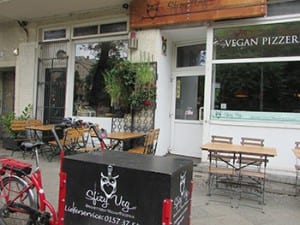 Even lumping together “vegetarian” as a single word, the criteria vary with the individual; there are vegetarians who will allow animal products such as eggs or milk that do not directly kill animals, vegans who will not consume eggs, milk, or any other products that cause animal suffering in the production process, and even those who are so strict that they refuse to wear not only leather, but also wool. There is an endless number of foods made with milk, such as bread, chocolate, and cheese, and even gummies and other candies are made with gelatin. Many sanitary products and cosmetics are also made with animal products, and they often use animal testing in the development process. You could go on and on, but suffice to say that it requires time to learn about it and resolution to spend a little more money. 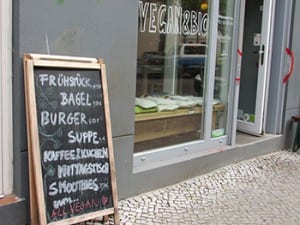 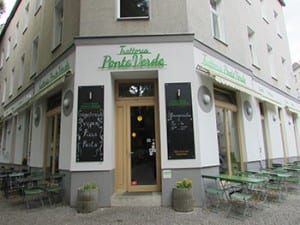 There are estimated to be about 600,000 vegans in all of Germany, and about 9,000 in Berlin alone. Including those in the broadest sense of the word, a little less than 4% of the German population is thought to be vegetarian. Then there are pseudo-vegetarians who are not true vegetarians but limit their consumption of meat for health reasons, so it does not pay for the restaurant industry to ignore this market. Even just taking a walk around my neighborhood, I can find supermarkets, restaurants, pizza places, and Mediterranean food places that offer only plant-based products and dishes, or regular places that offer vegetarian options or menus with special instructions for vegetarians.In Japan, there are yet few vegan establishments for the degree of growth of the food service industry. Most regular restaurants do not assume they will be serving vegetarians — Even if you order tofu salad, it will come topped with bonito(fish)flakes, and a vegetable miso soup commonly prepared with fish stocks. Japan can expect an increase in both overseas visitors and Japanese vegetarians in the future. Perhaps this will be a good business opportunity.