Last time we learned the Sioux word “teepee.” Today I am going to talk about a Turkish word. In Turkish, gece means “night” and kondu means “built,” so gecekondu refers to an “overnight-built simple structure, the squatter’s house.” As a follow up to the last post, today I am going to introduce construction-by-night instead of fly-by-night, another type of squatting in the zone that separated the former East and West Germany. I hope you will learn a bit about Berlin history and sense the generosity of the city administration.When Japanese people think of the Berlin Wall, they probably imagine graffiti, but it was only the residents of West Berlin that got close enough to the wall to write on it; a no man’s land was set up along the wall on the East side to secure a sufficient view to look out for escapees. The location of the lodging I will talk about today is a no man’s land on the curving line of the filled canal drawn from the Spree River. The administrative district was partitioned on the other side by a straight line right up to the front of the neighboring St. Thomas Church. If the wall was built in a zigzag, closely following the straight line of the partition, the view would become poorer. Instead of increasing the amount of no man’s land just a little, East Germany that wanted to cut the costs of building materials for the wall built the wall along the curve of the canal. The small corners that were rounded off were abandoned as East German land on the west side of the wall. 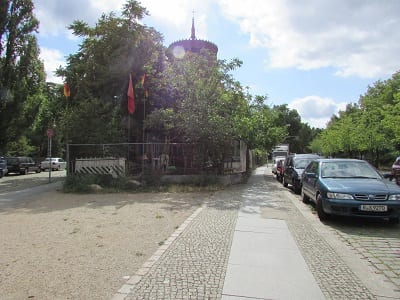 Going back a little, in 1983, a Turkish immigrant called Osman Kalin became a pensioner on his 60th birthday. After working hard all his life, he was suddenly left with nothing to do, and so out of boredom, he decided to clean up the empty lot near his home that was littered with large illegally dumped trash. After clearing the empty lot, he began building a home garden and planted cabbage, garlic, tomatoes, grapes, and other crops. This lot fell into one of the gaps between the curving wall and the straight line of the East-West partition that I mentioned earlier. To the West German administration, it was considered foreign land that fell out of their jurisdiction. Meanwhile, the East Berlin authorities suspected that he was trying to build a tunnel to East Germany under the guise of a home garden, and Mr. Kalin was visited by border guard soldiers for an inspection. According to neighbors who saw this take place, Mr. Kalin gave the soldiers who were shouldering rifles vegetables from the garden. 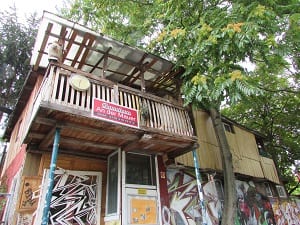 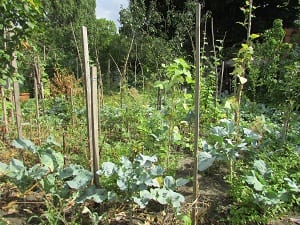 The East German authorities received a report that Mr. Kalin was growing vegetables for his family, and gave permission in 1994 for the Turkish immigrant to use the land for his home garden. A friendship developed between Mr. Kalin and the soldiers who would come and order him to cut the sunflowers whenever they grew taller than the wall, and he apparently received a package of wine and cookies from East Germany at Christmas.Mr. Kalin began building a hut in 1991 from discarded furniture and building materials, and created a place for enjoying tea in front of the hut with a table and sofa. The table was stolen so many times that he cemented it in place. To mention it once again, “in front of” the hut, that means on the public pavement. After the unification of East and West Germany, he received evacuation requests, but finally received official permission from the mayor of Kreutzberg in 2004. 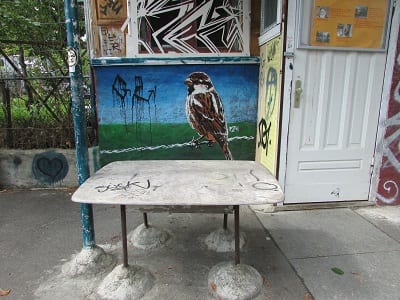 After the wall was torn down, Mr. Kalin expanded his garden to the east side as well, and created a small farm. The block in the center of the garden shows where the wall used to be. Mr. Kalin has developed a long-standing friendship with the pastors at the neighboring St. Thomas Church, and his home garden that was authorized by both East Germany and unified Berlin and peacefully bears vegetables, transcending religion and principles, has become a bit of a sightseeing spot for tourists. 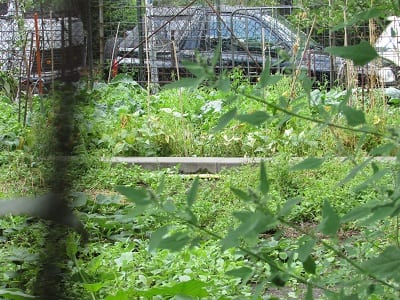 The block in the