On May 19, 2015, a production announcement for the musical Man of La Mancha was held in Osaka. Exactly ten years and one day prior to that date, on May 18, 2005 in Nagoya, Matsumoto Koshiro  who plays the lead role received the La Mancha Honor Award  during the curtain call after the 1037th performance*1 of the musical. The year 2005 marks the celebration of 400 years since Part One of the book Don Quixote was published, and 2015 also marks the 400th birthday of the book’s Part Two. As with the original Don Quixote, the musical Man of La Mancha seems to have a deep connection to these memorable dates. La Mancha is the name of an arid region located near central Spain. Based on the presence of an Arab kingdom on the Iberian Peninsula for approximately 800 years between the 8th and 15th centuries, the name apparently derived from the Arab word meaning a dry land or a flat highland. The story written with its setting in this region is Don Quixote. The novel is fully titled The Ingenious Gentleman Don Quixote of La Mancha, and therefore the Man of La Mancha refers to none other than Don Quixote. 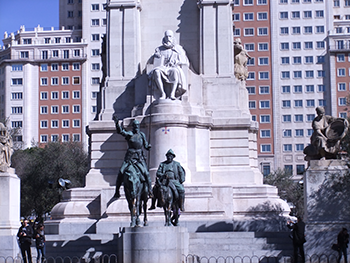 Photo1:Plaza de España in Madrid.
The bronze statues are of Don Quixote and Sancho Panza, which the stone statue of author Cervantes at the center looks down upon.

Considering the reconciliation with reality, acceptance of the world for what it is and giving up on ideals to be the worst kind of madness, Don Quixote charges head first in pursuit of his ideals along with his right hand man and squire, Sancho Panza. These two figures have touched the hearts of many and inspired courage in them. 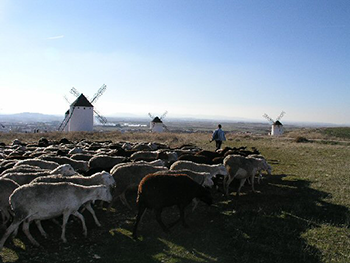 Photo2:The windmill in Campo de Criptana and sheep.
The superb Manchego cheese appearing in Don Quixote is made from the milk of these sheep.

At the end of June, 2005, after the completion of the 1086th performance held at the Imperial Theatre in Tokyo, for the first time Koshiro visited Spain, the birthplace of Don Quixote. On arrival, his first stop was the Plaza de España*2, located at the center of Madrid, in order to meet Don Quixote. Afterwards, Koshiro confronted the famous windmill in Campo de Criptana in La Mancha. Having received the La Mancha Honor Award  from President Barreda of La Mancha*3, having appeared in over 1,000 performances over a period of 36 years since the first performance back in 1969, and with him being over 60 years of age, perhaps Koshiro had been contemplating retirement from the Man of La Mancha. My thoughts are that although it was his first homecoming, Don Quixote in the Plaza de España and the windmill of La Mancha both scolded and encouraged him, saying, “Are you trying to reconcile like this? No! You have only begun. Keep on charging head first towards your ideals!” It probably inspired him to continue in his role as the Man of La Mancha. 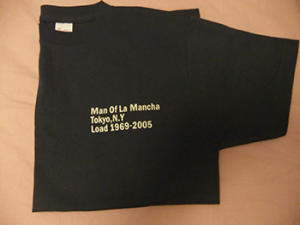 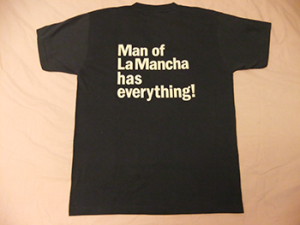 Photo3:  The front and back of the commemorative T-shirt made in 2005 to mark the sections of the Man of La Mancha’s performance.

Ten years since that time, the number of performances has now exceeded 1,200 times. The “wandering journey” begins this year from Osaka. It seems like the summer in Osaka will be heating up. Extra The cold Gazpacho soup is a staple during Spain’s summer. Its ingredients include tomato, bell pepper, cucumber, onion, garlic and bread blended with water, olive oil, vinegar and salt. It is more like a vegetable juice than a soup. 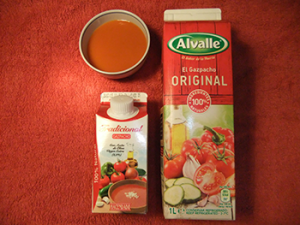 In 1970 in Koshiro’s Ichikawa Somegoro days, he appeared in a total of 60 performances of the Man of La Mancha at the Martin Beck Theatre in Broadway. It was around that time that the newly married Koshiro and his wife are said to have fallen in love with the Gazpacho soup they had at a Spanish restaurant near the hotel where they were staying, and ever since, Gazpacho has become one of the standard items in the Matsumoto family. On a side note, this soup also appears on the menu of a popular hamburger chain restaurant.