Bon Festival is a time when the spirits of the ancestors revisit their homes and ceremonies are held for them, after which the families see the spirits off again. During equinoctial weeks – once in the spring and once in the autumn  – people visit family gravesites in memorial of the spirits of the ancestors when the “next world” and “this world” are considered the closest. In countries like Spain that are mainly Catholic, there are observances for honoring the dead. November 1st is All Saint’s Day – a day for honoring and performing services for all saints, martyrs and the deceased. It has been the custom to visit the graves, offer flowers and pray for their ancestors to commemorate them, which is very similar to the equinoctial weeks in Japan. [caption id="attachment_1416" align="aligncenter" width="400"] 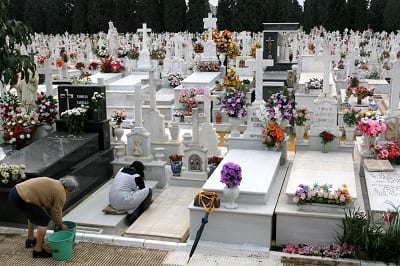 Visiting a grave in Spain. From http://www.lasprovincias.es/
[/caption] Very important to the equinoctial weeks in Japan are the botamochi rice cake of the spring and ohagi rice cake of the autumn. The names of these cakes used as offerings are associated with the peony (called botan in Japanese) and the bush clover (hagi). In Spain, the food best associated with All Saint’s Day is the fried pastry called Buñuelo de Viento. Basically, if you can picture small fried cream puff dough with various stuffing, then you can probably imagine its taste. Its appearance is like a plain takoyaki dumpling, or maybe similar to an Akashiyaki dumpling. [caption id="attachment_1416" align="aligncenter" width="400"] 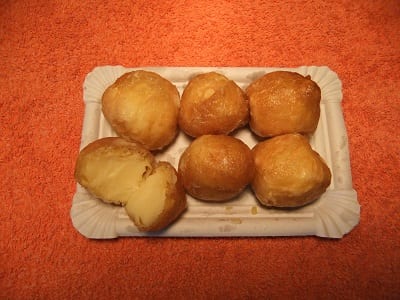 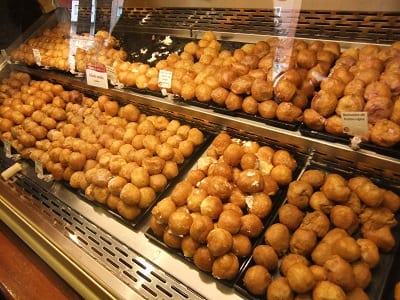 A local bakery. Inside the store display cases are heaps of takoyaki-like pastries. Choose your favorite from a variety of stuffing that include the standard custard as well as chocolate, praline, fresh cream, licorice and pumpkin jam.
[/caption] There is one another famous offering. The sweets called Huesos de Santo, an eerie name translated “saint’s bones” in English and taken from the name of this observance, are cylindrical-shaped sweets that are somewhat dry and similar to gokabo cookies in Japan. These are made with marzipan dough that mainly uses almond powder and sugar, and are wrapped around egg yolk sweetened with sugar or chocolate or strawberry jam. They are very, very sweet. [caption id="attachment_1416" align="aligncenter" width="400"] 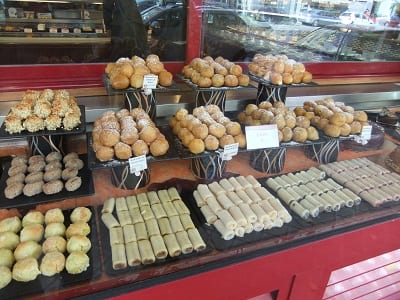 Towards the front of the display window are the saint’s bones (Huesos de Santo).
[/caption] [caption id="attachment_1416" align="aligncenter" width="400"] 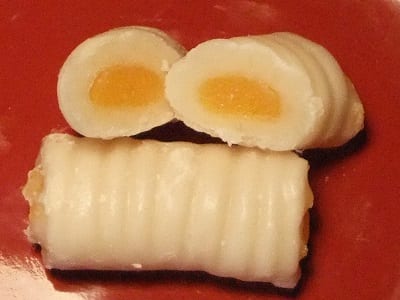 A close-up of the saint’s bone. The inside was stuffed with the standard egg yolk.
[/caption] By the way, the celebration of Halloween that started in Europe also originates from an observance of welcoming home the spirits of deceased family members every year on the 31st of October. It is similar to Bon Festival in that they are family reunions, but one difference is that, unlike Japan, evil spirits are also said to roam around, taking advantage of the turmoil when the other spirits all visit their homes, and that’s why pumpkin lanterns are carved out as a charm for warding off evil spirits. Halloween in Japan, where this holiday has become a big celebration in recent years, seems to be a stage for the evil spirits of the rivers and mountains to run rampant.