Today, paella is a world famous rice dish, but a look at its origins shows it was a local dish from the Valencia region of Spain on the coast of the Mediterranean Sea. If anything, it was a dish that could be made with ingredients on hand in one’s spare moments away from working in the fields. Necessarily, authentic Paella Valenciana was made only from ingredients that could be obtained from gardens, fields, and bushes. Seafood was not used at all, not even for soup stock. Incidentally, when the Regulation Committee for Denomination of Origin Certification for Valencia Rice and the Ministry of Agriculture, Fisheries, Food and Water in the Valencian government commercialized the name “Paella Valenciana,” they established 10 types of ingredients that should be used: chicken, rabbit, rice, runner beans, lima beans, tomatoes, saffron, olive oil, salt, and water. The only other ingredients approved for use are garlic, artichoke, duck, snail, paprika, and rosemary (herb), which are traditionally used in different parts of the province. It is said that if any other ingredients are included, the name Paella Valenciana should not be used. 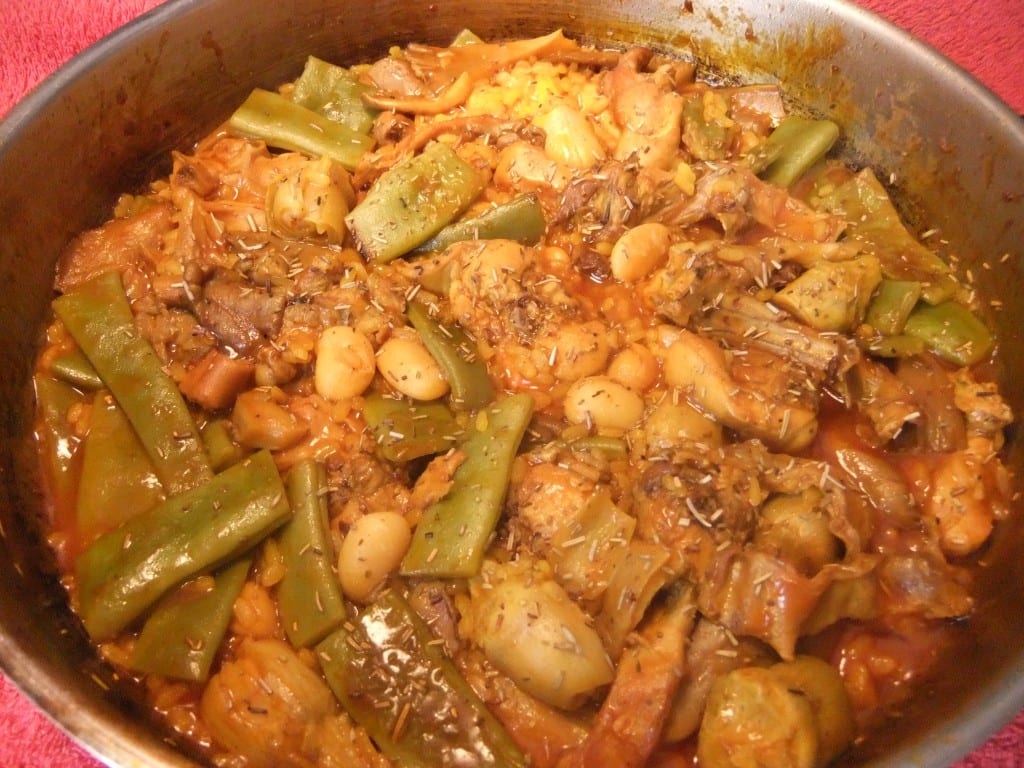 Valencia Paella containing rabbit meat and beans. All things considered, it’s quite plain, isn’t it?
Though using other ingredients is said to be prohibited, food lovers have created what is called “seafood paella,” which contains ingredients that produce nice soup stock, such as prawns, crab, mussels, Manila clams, common orient clams, flounder, anglerfish, and even lobster or spiny lobster. Seafood paella becomes just like a feast at the undersea Palace of the Dragon King, and can be likened to plain udon noodles being transformed into udon noodles cooked and served sukiyaki style with seafood and vegetables, or seafood hot pot served with udon noodles. At this point, it has graduated from a dish made in one’s spare moments away from working in the fields to a splendid banquet dish overshadowing its origins that is representative of Spain and loved by people worldwide. In the United States, barbecue, an event that takes place in the backyard, is apparently the only time when the father, traditionally the main breadwinner of the household, reaffirms his value to the entire family. In Japan, too, just as fathers only enthusiastically take control of the meal when making sukiyaki, in Spain it seems fathers who usually don’t even boil water traditionally make paella while insistently and incessantly going on about the right way of creating the dish according to the recipe passed on from their grandfather. Supermarkets sell seafood paella sets that include an appropriate mix of frozen ingredients such as shrimp, crab, squid, mussels, Manila clams, green peas, and white fish, so that even a single person can easily make that special dish. As long as rice and saffron are in the cupboard, at least a semblance of your “father’s paella” can be enjoyed. 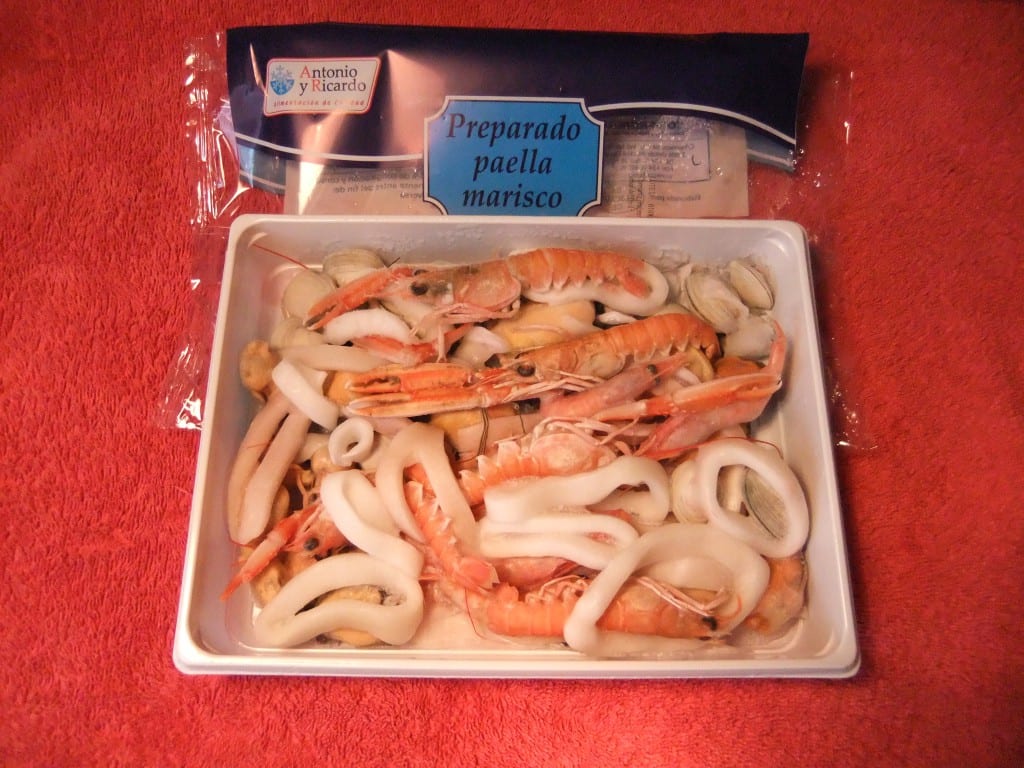 A frozen set for easily making paella
In Japan, too, people have come to enjoy paella. A large, round pan filled with so much seafood that you can’t even see the yellow rice is truly a mouth-watering sight. The dish is loved by the people of Spain, but when I ordered a mug of draft beer for €1 the other day at a standing bar, I was served a snack of yellow rice made with only cubes of bacon and zucchini. It was very tasty. If you aim for authenticity, the variations are endless, but why not easily try a little taste of Spain by using the leftovers in your refrigerator? By the way, since saffron is an expensive spice in Spain as well and care is taken when handling it, a colored powder called Colorante and powder mixed with saffran extract are often used when casually making it at home. 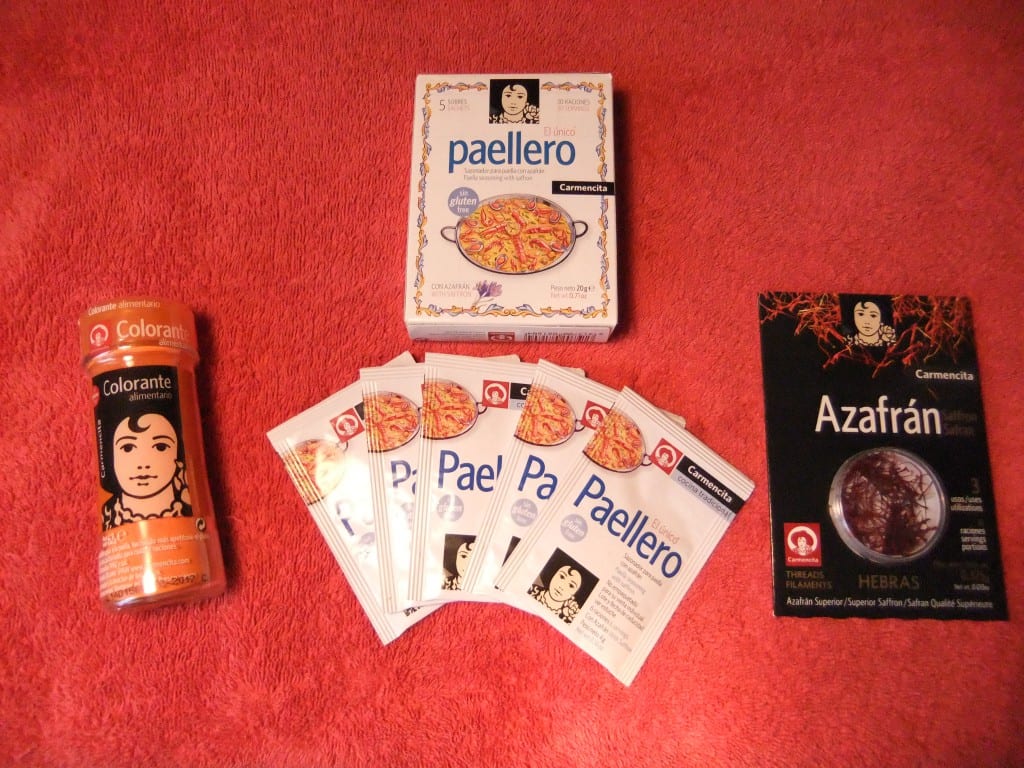