Places of worship are a standard sightseeing attraction all over the world—East or West. The cities of Spain are no exception, and their noble churches draw many out-of-town tourists and local faithful alike. Among these churches are some particularly magnificent cathedrals, whose names are usually translated using the Japanese word for cathedral, daiseido, or “grand church”. This leads many to believe that all large churches are cathedrals, but it turns out that being a cathedral is not simply a matter of size.The word cathedral comes from the Latin word cathedra, which referred to the seat in which the bishop who represented the parish would sit. In other words, a cathedral was the church that housed the seat of the bishop. As a rule, the most important places of worship were typically the grandest structures, but even a church that appeared small and plain on the outside would have been called a cathedral as long as it housed the bishop in charge of that parish. 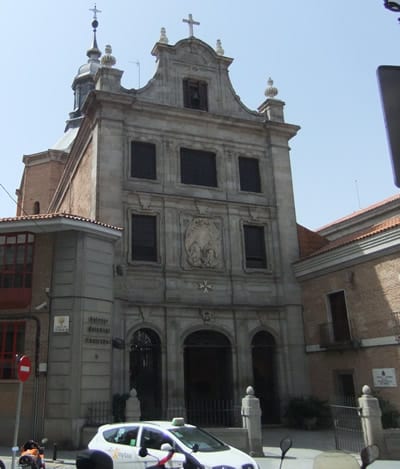 A small cathedral in MadridThe Iglesia Catedral Castrense (the Military Cathedral of Spain) in Madrid is a cathedral despite its compact charm. There are also examples of churches that are truly magnificent structures, yet are not cathedrals because they have no bishop.

Large church in BarcelonaThe Basílica i Temple Expiatori de la Sagrada Família is a church that is still under construction in Barcelona. The part of the structure that is the work of architect Antoni Gaudí has been designated as a World Heritage Site.
Let’s look closer at one aspect of cathedrals—the pipe organ . A cathedral is already a sacred place of prayer that turns one’s thoughts to God, but this dignified mood is elevated even further by the presence of a pipe organ that flows down from the ceiling… or possibly the heavens themselves. I’m sure that the sound in a concert hall, which is scientifically designed for ideal acoustics, is magnificent—but long exposure to the sounds of a cathedral pipe organ joining crowds of faithful gathered to lift their voices in prayer will soon throw even non-believers into a state of devotion.The ancient city of Salamanca is located about 200 kilometers to the west of Spain’s capital city of Madrid. Its cathedral held four pipe organ performances in June and July. The choir is bounded by an organ on either side, one dating back to the 16th century, the other to the 18th. The program called for the pipe organ player to perform on both, so that the audience could enjoy the different sounds produced by instruments built during different eras. The older organ had a mellow, sophisticated sound that still managed to sound fresh and vibrant, while the newer one had a jauntier, more elaborate sound. It was a precious experience for anyone simply to be able to hear them played live. 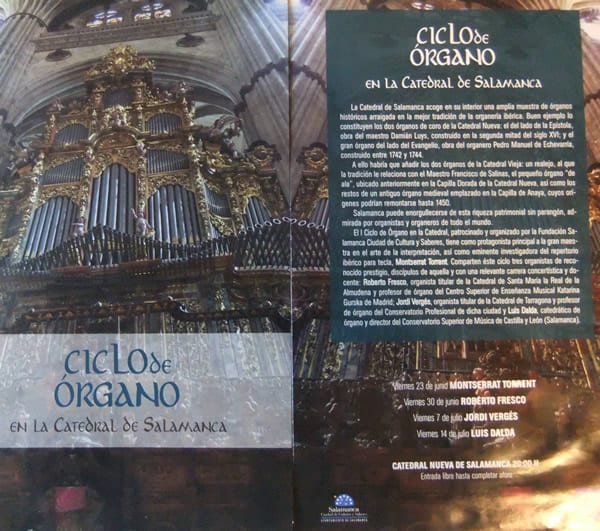 Pamphlet from the pipe organ concertThis is the pamphlet from the performance. The front and back show the 18th-centrury Baroque-style pipe organ that’s installed to the left (the “gospel side”) when facing the main altar.
Across from the gospel side, on what’s known as the epistle side, is the pipe organ that was built by maestro Damián Luys in the middle of the 16th century. Shockingly, this organ was repaired and restored by the Japanese. In 1974, a pipe organ maker named Hiroshi Tsui who is from Shirakawa-cho, Gifu prefecture visited Salamanca and was struck by the weak sound that came from the instrument, which had not been played in over two hundred years. He requested permission from the local authorities to restore it, which they finally gave officially in 1986. Whether due to the separation between church and state, poor economic conditions, or what—Tsuji was granted permission to restore it under the harsh terms that the restorers foot the entire cost. Apparently, the total came to more than 30 million yen at the time. 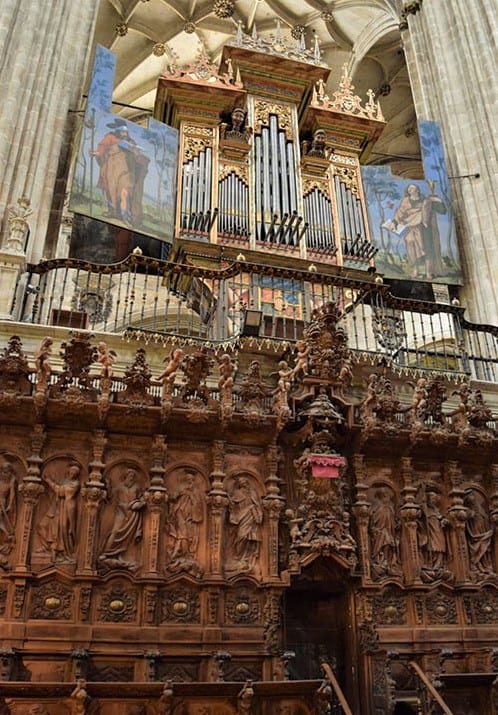 The restored 16th century pipe organThis is the Renaissance-style pipe organ restored by Hiroshi Tsuji.
Tsuji was so passionate about restoring the organ, however, that he accepted the terms. He earned the support of Eikichi Hayashiya, Japanese ambassador to Spain between 1981 and 1984 and a man with extensive personal connections in both countries. Tsuji was also backed by Empress Michiko, allowing him to raise 35 million yen in just one year. In 1989, he finally began working on the restoration, and in March of 1990, the cathedral echoed once again with the sounds of the 400-year-old instrument. It was a moment when Japanese craftsmanship and the artistry of those who lived four centuries ago truly resonated as one. Inspired by his great achievement, Salamanca University (Spain’s oldest university, built at the same time as the city’s cathedral) established the Centro Cultural Hispano Japonés (Spanish-Japanese Cultural Center) on its campus in 1999. Inside the center is a multipurpose hall named after the empress, called the Aula Magna S.M. Emperatriz Michiko, further expressing the community’s gratitude for the warm relationship between the two nations.The great scholar Eikichi Hayashiya who helped get the organ restored learned Spanish at the Osaka University of Foreign Languages (now the Osaka University of Foreign Studies) before going on to join the Ministry of Foreign Affairs. He studied abroad at Salamanca University between 1941 and 1943. In honor of his connection to the school, Salamanca University also established a library bearing his name, the Biblioteca Embajador Eikichi Hayashiya de Estudios Japoneses, within its cultural center.