Nice to meet you, I’m reporting from Vilnius, capital city of the Baltic state of Lithuania.In the suburbs, the sound of the motor in weed-cutting bush cutters and lawnmowers had been ringing through the air until last month, but recently that has changed to the sound of hatchets and chainsaws. The summer has ended and now we’re gradually preparing for the onset of the cold winter. On that note, this historic first report will focus on the state of heating and heaters in Lithuania.In Lithuania, heating equipment can be broken down into the following three categories:Electric stoves are also sold as auxiliary home heaters, but I’ve never seen the kind of kerosene stoves usually seen in Japan.Most apartment buildings in Vilnius use ①, the community-managed types, and once winter comes and the days get colder, the apartment administrators turn the heaters on, and then turn them off once it gets warm again in the spring. Once the heaters are turned on, they’re never turned back off throughout the entire winter, no matter how many warm days may come in a row. In newer buildings, each individual household is able to turn the heater settings off, but this isn’t possible in older buildings.Regardless of whether it’s a warm day or whether you’re outside somewhere, the heater is always going to be on, and so the heating bill ends up getting pretty ridiculous. The cost differs according to the building, but for an average-sized apartment in Vilnius (about 70m2), the bill for a single month can get up to about 150 euros. With the average salary being around 650 euros, approximately 1/4 of your earnings gets blown on the heating bill. It’s super expensive.② and ③ are mainly used in standalone houses, and produce warmth by burning firewood or pellets. This is fine if you own land in a forest and can provide your own firewood, but if not, then you have to buy it. 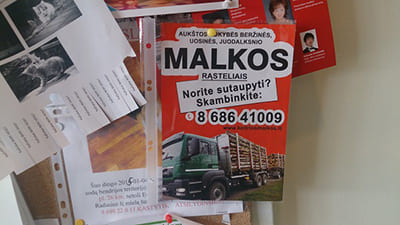 Firewood sellers’ advertisements are seen on public message boards.
Trucks filled up with firewood are stopped in supermarket parking lots. This firewood is placed there as samples, and you can call the number written on the truck and have them deliver firewood to you for free. 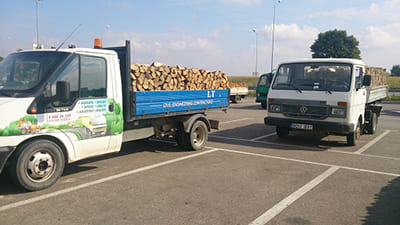 Firewood costs about 30 euros for one cube (1m x 1m). It depends on the functionality of the stove in use, but I think about 10~15 cubes get used per season. Recently, there are stoves that can burn not only firewood but also pellets and coke as well, which helps keep the cost down a bit.In my house, we use both a firewood stove and hot-water central heating using a gas boiler. (② and ③) Hot-water central heating means that water heated by a gas boiler is distributed to each room, where a radiator converts it into either thermal or radiant heat, thus heating up the room. Each room has a radiator like the one in the photo. 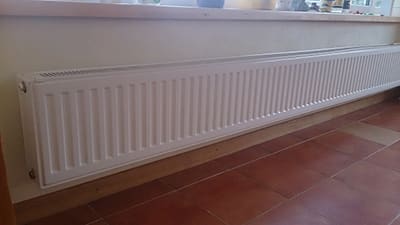 Hot water flows through the inside of this radiator, and heats up the air. 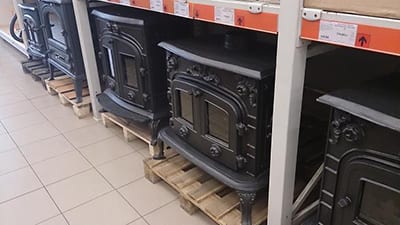 Also, lots of firewood stoves are sold at hardware/DIY stores.
The firewood stove in the center of the photo is about 200 euros. There are all sorts of them available, from cheaper ones to more expensive ones, but the cheap ones tend to have bad combustion efficiency. “How much is your heating bill?” is a major theme throughout the winter in Lithuania. Topics such as which fuels are best, and where you can get cheap fuel come up a lot in conversation over drinks.The winters are cold, and the high costs are pretty tough, but there are things that really make the winter enjoyable. I plan to write about these things in later articles, so look forward to that!

It’s been three years since he fells in love with the Baltic state of Lithuania and emigrated here without really thinking it through. He runs a restaurant (which would sound cool, but it’s actually just a diner) as Lithuania’s first-ever Japanese owner/chef. He lives a relaxed life outside the capital city of Vilnius with his wife, daughter, and dog.