What is doing an amazing job even at the age of 90?｜Yuriko Mikami｜KnowLedge World Network｜Activities｜KNOWLEDGE CAPITAL
Menu

Mention symbolic buildings or cultural properties in Milan and what likely comes to mind are Duomo and the Last Supper, one of Leonardo da Vinci’s masterpieces. However, there are others in Milan that are just as valuable as that historic building and cultural property. They are the old-fashioned trams. Modernization is moving ahead full throttle in all European countries, and the tram is no exception. Development has flourished to include low-floored trams level with platforms, linkable connecting trams, and trams equipped with heating to combat the cold. However, unbelievingly, there are still very old-fashioned trams running in Milan. In fact, there are dozens of them! Italy is a country of longevity like Japan, and many elderly live in Milan. These old-fashioned trams built 90 years ago are likely carrying seniors of the same age around Milan. Sometimes, I’ve seen stooped elderly leaning on canes very slowly and laboriously negotiate the treacherous step when getting on and off a tram. After an elderly person has at last climbed aboard with the driver patiently waiting, the scene is then played out in reverse when getting off. When trams take off, the passengers vigorously sway with the momentum. But, the seasoned Milanese aren’t thrown about by the swaying, not even the elderly! Everyone grasps on to handholds with a second to spare. Even after departure, the trams continue to run while fiercely swaying, rattling, rumbling, and screeching along the track. The trams originally weren’t electric, but were pulled by horses. Later, after the age of steam locomotion, they ran on electricity. Apparently even some Milanese don’t know this, but there was also a time when the trams were used like hearses to carry the dead to mortuaries, and during the war they served as ambulances with the seats laid back for the wounded. As ambulances, they probably weren’t very good for saving people since they’re slow, shake fiercely, and people fall off seats from the swaying when going around curves…I digress, but I heard that across the ocean in San Francisco you can see 158 old-fashioned trams that were bought from Italy. Today, Milan has a lot of traffic and trams are often blocked by illegally parked cars, and bad-mannered drivers of cars don’t yield to trams at complicated intersections of tram tracks and roads. Tram drivers must have quite a stressful job. Plus, the tram horn is a cute (?) bell chime the driver toots by stepping on a pedal. In today’s world of loud noises, this unintimidating tram horn is continuously ignored even when tooted over and over. Am I the only one who thinks it’s touchingly sad? There are also old-fashioned trams that have been totally remodeled and transformed into wonderful restaurants that passengers can eat in while riding around Milan. I’m intrigued. Do plates and glasses move around from the vibrations? Can passengers calmly enjoy their meal? I’d like to try it sometime. 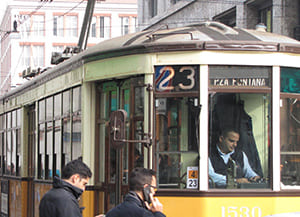