In December, various foods appear in supermarkets in Italy that can’t be passed up. This includes different kinds of chocolates that for some reason are normally hidden away and not brought out, a beautiful mustard-flavored fruit syrup condiment called mostarda that is delicious paired with meats and cheeses, and cotechino, an unimaginably fatty meat made of pork. Speaking of rich dishes, that reminds me of one of my colleagues who is quite fat. Setting aside the question of whether that person is on a diet or inclined to diet, he once said to me with a lighthearted smile, “I feel at ease when I eat fattening foods.” I was at a loss as to how to respond. Getting back on topic, one of the products that appear in the supermarkets in December has a huge presence. That product is panettone, which was created in Milan around the 15th century. Recently, panettone imported from Italy or baked by bakeries and sweet shops in Japan have become common, so it is probably already familiar to the Japanese. In recent years, panettone is rarely made at home since the bread, which has a cake-like sweetness, requires a lot of time and effort, including being cured twice and hanging it upside down so that it will rise to a height of up to 30 cm. Generally, people buy it from a bakery or eat factory-produced ones. The most popular size is packaged in a 1-kg box. Just counting the number of factory products shows there are about 10 different manufacturers lining the streets that compete with one another. The supermarkets in December look decorative with a variety of colorful boxes and packaging from each manufacturer. The various stories about the origins of panettone truly encompass a rich range of tales, from those that are simplistic but make sense, to positive legendary stories with happy endings that like a Disney movie are full of romance and fantasy. Perhaps impacted by the many origin stories, panettone also has many variations. In place of dried fruits, it is filled with ingredients such as pistachio cream, chocolate cream, and Limoncello lemon liqueur cream, while the surface is coated with chocolate. Depending on the neighborhood, it might also be filled with ice cream. There is an array of products that are astoundingly sweet. Maybe because of this, a product labeled panettone must adhere to laws strictly defining fixed ingredients and their quantities. The panettone made by professional bread bakers are tasted and rankings published, but even the factory-produced panettone surprisingly have different textures and flavors, making taste tests enjoyable. This is also a time of the year when my colleagues compete with one another to show off how they improve the panettone they bought. Sprinkling it with chocolate or walnut powder is apparently basic, but topping it with mascarpone cheese and then adding rum sounds really delicious. However, when I imagine the calorie count my courage to try it fails me. It seems I’m surrounded by Italians who enjoy eating fattening foods that put them at ease (?). 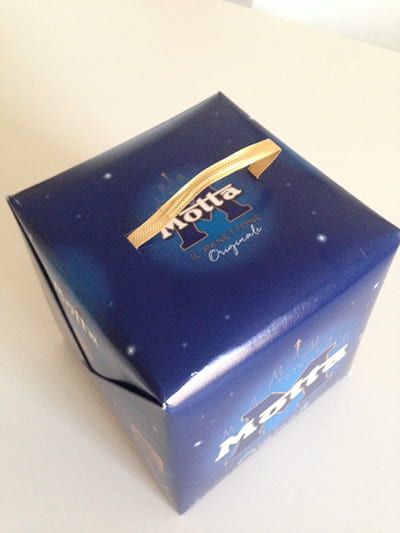 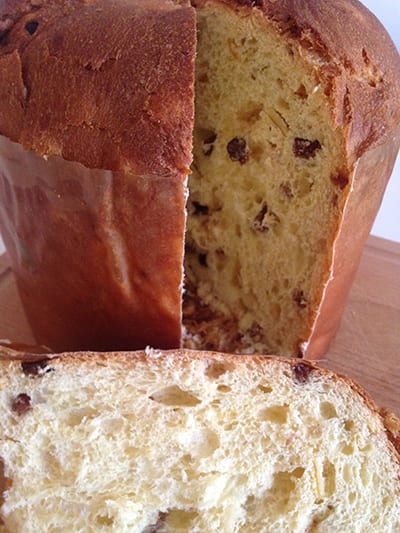