The Palazzo Morando in Milan is located along a street lined with high-end fashion boutiques. Today, it is a fashion museum that is also used to host fashion-related events. The theme of its most recent exhibition was postwar recovery in Milan, so before I went to see it, it appeared to be quite a strange collection. As you know, Japan’s postwar recovery threw the country headlong into becoming an economic superpower, shocking the rest of the world. I learned from the photographs in this exhibition, however, that Milan was toe-to-toe with Japan in the first ten years after the war ended. The exhibition was divided into two sections. The first led you through a jet-black room—complete with black walls and black window curtains—that was filled with photographs taken immediately after the war. Halfway through, the setting changed to a pure white room hung with pictures infused with the light of hopeful recovery shortly thereafter. Although it was a simple design, it was quite effective. I was able to viscerally experience the contrast between the heartbreaking gloom and soaring hopefulness of the Milanese people. Milan was more heavily damaged by bombing than any other Italian city. It was a natural target, given that it had been a vibrant commercial center. There was an elderly visitor at the exhibit who told me, through tears, that when he  initially saw the bombed-out images, he could still hear the explosions ringing clearly in his ears. Apparently, the government forbade people from taking pictures of the damaged city or the state of its citizens during the war—meaning that many of the photographs in the exhibit were those secretly taken by amateurs. Somehow, though, this seemed to infuse the shots with even more profound meaning. War-torn Milan took all kinds of measures to protect its buildings from the bombings. Every home naturally covered its windows with black curtains to prevent it from becoming a target, but police patrolling the streets even took the reflectors off their bicycles as well. The golden statues of the Madonna on top of Milan Cathedral was covered in cloth. Interestingly, the photographs showed that the cathedral suffered relatively minor damage compared to the other buildings in the city. I’d like to say that it’s because they painted its highly visible white marble walls with black paint, but it wasn’t that. The truth is that the cathedral was just very, very lucky. The bombs that fell on it sometimes wouldn’t explode—but there was another reason that it miraculously survived, and it has to do with what it was made of. While exploding bombs would dramatically strike the sturdy marble cathedral, the other wooden structures in Milan suffered the unlucky fate of catching fire from the fallen bombs and burning down. The buildings constructed during Milan’s recovery began to tower higher than Milan Cathedral, breaking previous city regulations. These illegal structures kept out of trouble, however, by each promising to erect a replica of the Madonna statue on their highest floor. Whether each of these too-tall buildings actually put a Madonna replica on their top floor or not was something that the common people had no way of verifying, but don’t you think the idea of apologizing to the great saint and paying respect to her in this way is a wonderful aspect of Milan’s history and development? 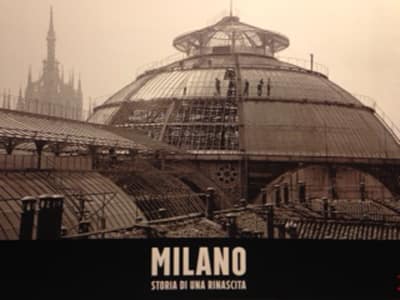