Are you often surprised to find that a fad you think should quickly die out unexpectedly remains resolutely popular? Looking around my colleagues I noticed more of them are using electronic cigarettes. I have never smoked, so I can’t share in smokers’ joys and sorrows (yes, sorrows!). From my perspective as a non-smoker, e-cigarettes partly seem like a toy, a pacifier, so when more e-cigarette shops appeared in Milan, I would go past them with a sidelong glance, coolly thinking, “fads die out, they’re destined to die out soon.” Initially I thought smokers who couldn’t quit were switching to e-cigarettes as a step towards quitting. I know people who have tried nicotine patches and nicotine gum in an effort to quit smoking, but by far the majority of them failed, so I assumed without doubt that e-cigarettes would have the same fate. 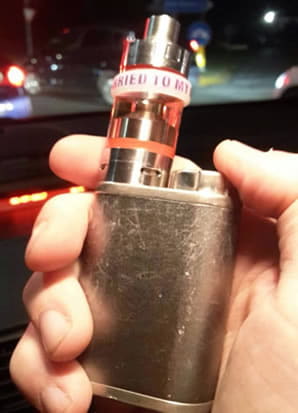 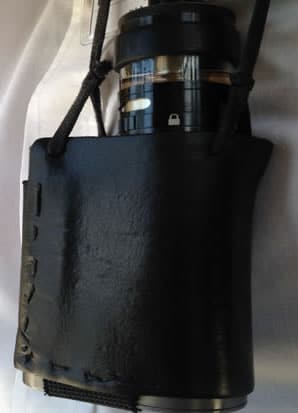 This man is particularly good at sewing, so he made himself a leather e-cigarette pouch and hangs it around his neck!Italy banned smoking in restaurants and public spaces about 10 years ago. So now when I go out for an evening meal with friends, while waiting for dessert or coffee after finishing the mains, the smokers stand up together and go outside the restaurant for a smoke (which is OK outside the restaurant). Being a non-smoker, I was often left at the table by myself, so now I go outside too and breathe their smoke… It seems the conversation among smokers there sometimes gets quite lively even amongst strangers.So now in Italy people are quietly smoking e-cigarettes in places where smoking is banned. But the e-cigarettes becoming popular in Italy come in 2 types, with nicotine and without nicotine, so my initial prediction was wrong: this product probably has a long life ahead of it.I ridiculed e-cigarettes right from the start, but then I suddenly realized that the smoke (vapor) from the e-cigarettes my colleagues smoke gives off pleasant aromas. When I asked about that, they said “I’ve got vanilla today” or “Today it’s a mixture of walnut and honey” and so on. They seem to change aromas every day. As a non-smoker, these aromas are welcome, so now I don’t hesitate to coax them into smoking (and exhaling) with a “Don’t you feel like a smoke?” They draw in the smoke (vapor) and blow out clouds for me, and I too breathe the lovely aromas in deep.Then I noticed: “deep breath.”There is no doubt that smokers breathe deeply more often than non-smokers?!So, when you think about it, maybe there is a good side to smoking!