This time, even though it may be a little late to talk about, I would like to share with everyone the experiences I had during my first winter holiday spent in America. 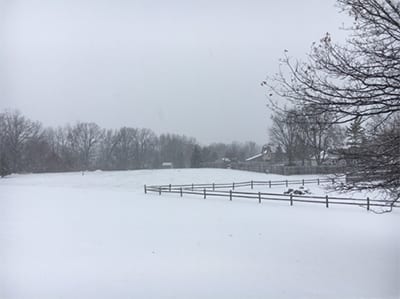 Around here most people are able to take vacation from around Christmas until the New Year, and most people tend to return home and spend time with their families. I also returned home before Christmas to see my husband’s family in Indiana.Upon entering the house, there was a shining Christmas tree that reached up to the ceiling, and the living room was full of Christmas decorations and presents. Just the sight of that itself was enough to warm my heart and fill me with joy. 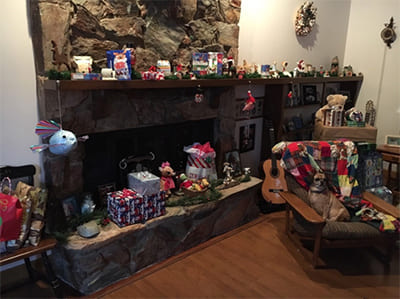 Lots of presents under the tree as well! 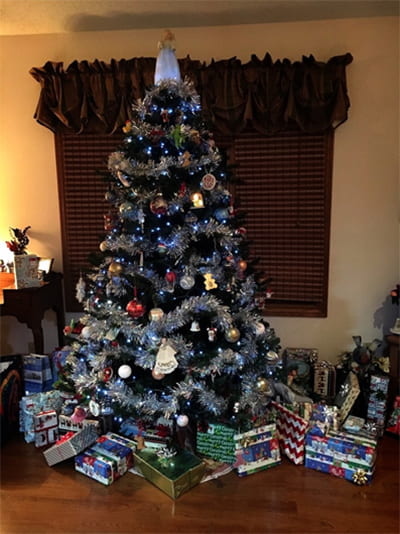 （※Unlike Japan, where most shops will carefully wrap your gifts for you, this is not typically done at most stores in America, so everyone has to wrap all of these presents themselves. . For that reason, when the Christmas seasons rolls around you can see many varieties of wrapping paper lined up in stores. It can certainly be a lot of work wrapping all of these presents yourself. However, in doing so it becomes almost impossible to guess what is inside and where it came from, which makes the moment when you are opening the present all the more exciting!During my childhood, it was always the yearly tradition that when I opened my eyes on Christmas morning there would be a present from Santa placed by my pillow, but that is not the case here. It will of course vary depending on the family, but in the case of my family, you gradually see a growing number of presents under the tree from the day the tree is put up until the actual day of Christmas arrives. On the night of Christmas Eve, everyone opens one present, while the rest are opened on Christmas morning with everyone in the family getting together and opening presents in order, one at a time. From the time we start until the last person has finished opening all of their presents, it can easily take more than three hours! That is the extent of how many presents there are. Given that up to this point I had only ever received one present on Christmas, the number of presents was unbelievable. I was feeling satisfied after the first present, but after that the presents just kept coming, making me feel like “Is it really okay for me to have this!?” and “You mean there’s still more!?” I had never received that many presents before in my life.Along with that, there was my Dad’s homemade cooking which I am always looking forward to. Christmas was of course much more extravagant than usual. Because he has Swedish lineage, I was treated to lots of different traditional Swedish foods. There were meatballs and gravy eaten with lingonberry jam, corn and oyster casserole (this was maybe more a recipe of my Dad’s making than something strictly traditional), Swedish sausage, and Swedish rye bread with soup, among others. In addition, there was also what is known as “pickled herring.” There is a very particular smell and taste to it, so typically nobody besides my Dad would eat it, but when I tried it I ended up liking it. (Although to be fair I was also told things like “Wow! You’ll really eat anything!”) It tasted similar to something I had eaten in Japan called “battera,’ a kind of pressed mackerel sushi. Also laid out across the table was a Swedish pastry called “Kringle,” as well some homemade Swedish Pepparkakor cookies I made with my Dad before Christmas. 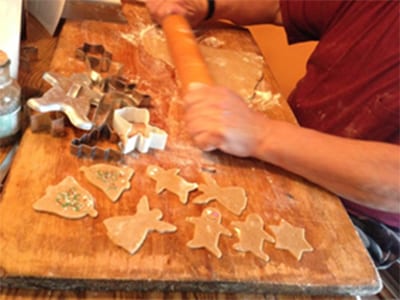 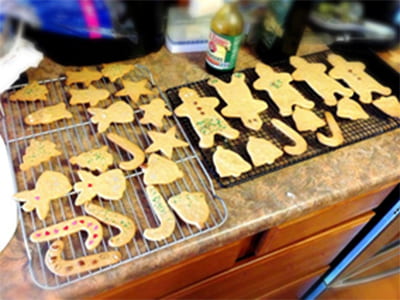 Two days after Christmas, my Dad suggested “Let’s create some new traditions in our family!”, and so while it was not officially the New Year yet we decided to make some Japanese New Year food. While of course the ingredients needed to make traditional Japanese New Year foods like “Osechi” were hard to come by, I decided to make “o-zōni,” a traditional Japanese soup eaten during New Year’s, along with some simple sushi rolls (although I know sushi rolls are not traditional New Year foods…) Luckily, my grandmother had sent me lots of dashi and mochi from Japan, so I was able make great use of them. I was so happy to see the whole family eat using chopsticks, even if not everyone had gotten used to using them, and along with that they all let me know it was delicious with their empty plates. It was the first time eating Japanese o-zōni for most of them, and it seemed to be a hit with everyone. I was happy that I was able to reproduce my grandmother’s o-zōni in America, and for a moment it made me feel nostalgic for Japan. Later that night, we went as a family to see Christmas lights. A large space that is normally a park was being used for the event. Local businesses and organizations had decorative illuminations with their own respective themes, and we admired them as we rode around in the car. 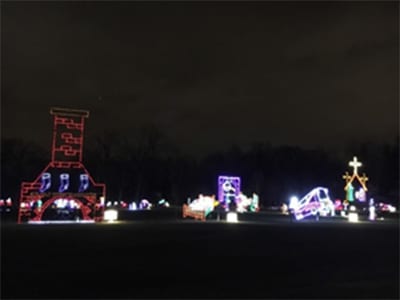 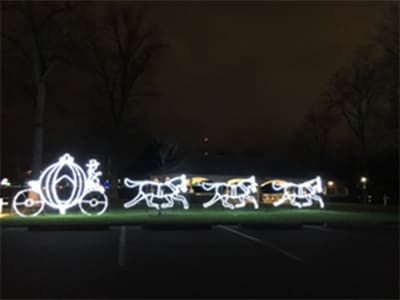 （On the official site you can see a video that gives you a small taste of the lights on display. Please have a look if you are interested! Fantasy of Lights→http://www.fwfantasyoflights.com)There were all kinds of cute and unique lights, any of which would make my heart jump with excitement. 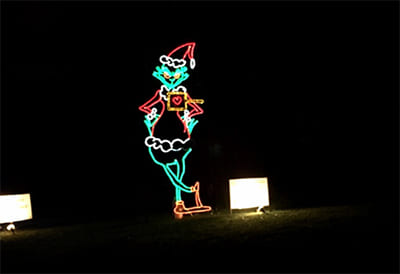 (My personal favorite was the Grinch.)
Considering how busy everyone is with preparations from Thanksgiving in November through Christmas in December, I think that after the big event of Christmas is over many people bring in the New Year by simply relaxing at home. While there are also a lot of people who celebrate with a grand New Year’s party, for New Year’s Eve we opted to quietly relax and just watch the live broadcast of the countdown in New York. Outside, while Christmas is over, there are still many houses that have their Christmas decorations left out. The Christmas spirit has not left me yet either, and while even now I am still basking in the afterglow of the holidays, I know that soon I will have to switch gears and get back into the regular swing of things. This year I will continue to share more interesting information and experiences from my everyday life here in Findlay, so I hope you will continue reading my articles. For everyone in 2017, here’s hoping that all of your days in the new year will be filled with peace and happiness.