Americans are known for their love of cars. Perhaps its because Henry Ford, the father of the affordable automobile was, from the United States. That can be one of the reasons why only a dozen or so cities in the United States have a subway system. Boston is one of them. Boston has the oldest subway system in the United States. The subway began operation in 1897 to what most people know today as the Green Line. The subway system now spans the cities of Boston, Cambridge, Brookline and eight other neighboring cities. Although our subway system is not as complex as the one in the Greater Tokyo area, our subway serves include heavy rail (Red, Orange and Blue Lines), light-rail vehicle (Green Line) and trolley (Mattapan-Ashmont).※1 Two of these lines are accessible in Cambridge: the Green Line and the Red Line that has the most ridership and the line I normally take to get to work …that is, if I don’t walk or take the bus instead! 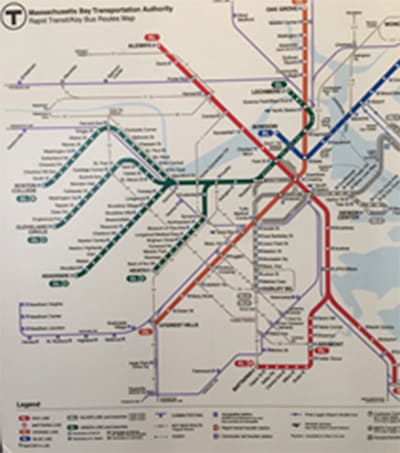 Map of MBTA
The Massachusetts Bay Transportation Authority (MBTA) is our public transit system in the Greater Boston area. The MBTA is known as the ‘T’ in Boston, but the ‘T’ mainly refers to the subway system. However, the MBTA also encompasses the bus, ferry and commuter rail systems. I am fortunate to have unlimited use of the ‘T’ and the bus as a benefit that MIT provides to all its employees. Since I have unlimited use of the “T” I use it often; a desirable behavioral outcome and better for our planet!In December my office had a “fun” retreat at “Boston Winter in Boston City Hall Plaza. We gathered at 2:15pm and headed out for an afternoon of ice-skating, Belgian waffles and a time to relax. We took the Red Line subway from Kendall/MIT Station to Park Street and transferred to the Green line to get to Government Center. While on the ‘T’, I couldn’t help but to notice a sign on the wall—“KINKI Osaka, Japan, 1986”. 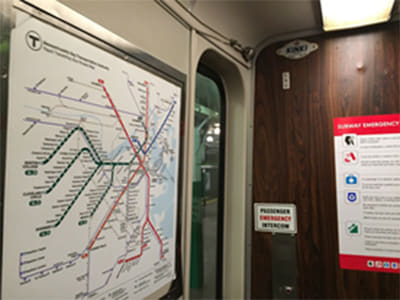 Kinki sign on the wall of the Green Line Subway 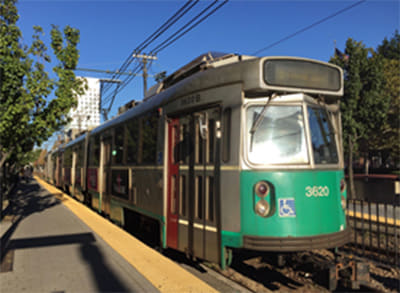 Green line subway
The train that we were riding on was 30 years old! MBTA purchased 120 rolling stocks from Kinki-Sharyo. One hundred of the 120 rolling stocks purchased from Kinki Sharyo were built in 1986 and 1988, and the other 20 were built in 1997. As of 2014 there are 110 rolling stocks in operation from Kinki Sharyo and are proven to be the better built trolleys.※2 The Green Line uses light-rail vehicles (LRVs) otherwise knows as trolleys/streetcars because the trains utilize both underground rail as well as surface rail, which has numerous grade crossings. You can imagine how much wear and tear the Green Line trolleys get with the harsh Boston winter weather. However, very little upgrade or work had been done on the Green line since the purchase of the trolleys. ※3 You can see corrosion and rust on the outside of the trains. Thus in 2015, eighty-six of the Green Line trolleys were refurbished for improvement. ※4 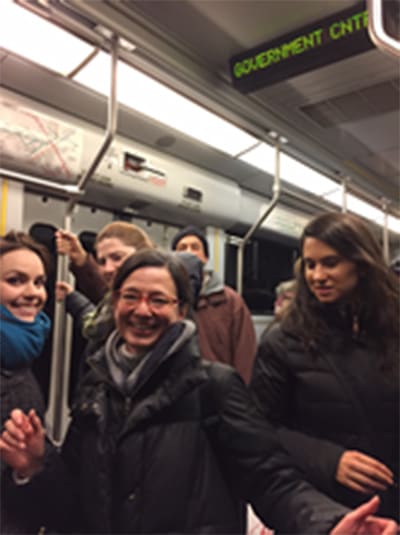 Me and my colleagues on the Green line about to get off at Government Center to go ice skating
By 2:45pm we were standing in line to get our ice skates at “Boston Winter” and soon hitting the ice for some afternoon of fun—only a mere 30 minutes from my office in Cambridge! I’ve only been ice skating a few times before our “Boston Winter.” The first time I attempted ice skating was in college, another time was when I was living in Manila in The Philippines and most recently in January of 2015 when my daughter was invited to a birthday party at a temporary ice skating rink in Cambridge! I was a little scared and worried, but like riding a bicycle I was skating on the ice in no time. Some of my colleagues and I even played freeze tag on ice. After some fun on the ice we had some mulled wine at “Boston Winter.” Thanks to the convenience of the Green and Red Lines leading me back to Cambridge, I was able to get back to my office by 5:30pm to get a few things done before calling it the day. 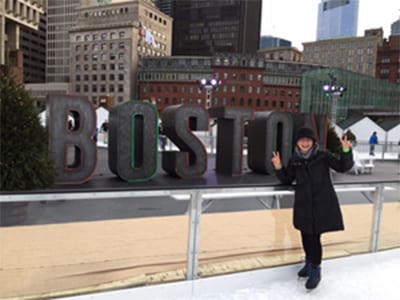 I was born and raised in Japan but now lives in Cambridge, MA in the USA. I have also lived in Kenya, Cambodia and the Philippines. I love to travel and eat local cuisines. I'm recently started to study about wine. Dozo yoroshiku onegaishimasu.