When you live in Europe it is relatively easy to travel and get into contact with other ways of living. It is even not uncommon to go to Germany, France or Italy on a school trip in middle- or high school. Although I have many fond memories of these experiences, also some of the things that shocked me then still wander my mind today. One of the differences between the Amsterdam cityscape and other places I’ve been is the sight of poverty. One time when I was in Cologne, me and my classmates saw a very dirty woman with a little baby begging for money on the steps of a cathedral. It was quite shocking to me. I had seen homeless people (mostly men) with most likely a drinking or drug problem walking the streets in Amsterdam, but never a woman with a little baby (!). Her clothes, face and hands were almost black from dirt. That day we saw at least five other people begging. It made me think that The Netherlands must be quite a successful welfare state. In this blogpost I would like to talk about several regulations the city of Amsterdam offers to those in need.In recent years the Netherlands as a welfare state has been subject of many debates on changes in regulations and responsibilities. It definitely was a successful welfare state while I was growing up and while I was studying at university. To give an illustration, in general, healthcare and medicine used to be free apart from the monthly fare, and also college/ university fees were completely financed by the government if you graduated (If you did not graduate, the same amount, roughly €1800,- a year, was changed to a loan). Nowadays people have to pay more for healthcare and scholarships are no longer a gift upon graduation. It is understandable that people, especially those with a low income, are affected by these alterations. Of course, The Netherlands is a wealthy country, and our poverty rates within Europe are one of the lowest, so poverty is not frequently associated with The Netherlands. But, although it might not be visible to the eye in many cases, it seems that one in ten households struggles to make ends meet. One in ten households have an income that is low. This could mean families don’t have enough money to pay the rent, buy nutritious food or school necessities for their children. Luckily, amongst the changes in several welfare systems, many systems and initiatives which support the social and economic well-being of Dutch citizens are still very much to be counted upon. I don’t have enough knowledge on similar regulations in Japan, but for me it has always felt very reassuring that in The Netherlands people can count on a basic level of healthcare, education and social security. The city of Amsterdam is conducting a project named ‘Pak je kans’ (‘Seize your chance’) with the aim to reach out to the lower-income households in the city and inform them of the regulations suitable to their situation. Regulations available are: a discount on health insurance, a free ID card, a free laptop for children in middle- or high school, free public transport, reimbursement for school costs for children under 18, a free discount card for free or cheap entrance at museums, plays and events, financial support for costs made because of practical obstacles due to a physical handicap or chronic illness, financial support for special forms of transportation, 5% discount on daycare, cheap loans, one free consult at a veterinarian’s office, coupons for toys and clothing for children, a pardon for paying city taxes, loans to pay for education, loans to pay for extra costs of studying for people over 18, the foodbank, temporal financial support when you have a sudden decrease in income, special funds for broken washing machines and refrigerators, financial support for elderly people with a low pension, financial support to pay the rent, child support, financial support to take care of your children, financial support to pay for healthcare, financial support for children to do sports and financial support to pay for your child’s drawing, dance or music lessons. Needless to say, this is a lot of support from the city of Amsterdam for the financially less fortunate in the city. Although having a low income can make for a very tough living, I think that support like this being available will at least lift the burden for some and make it easier for children to focus on enjoying their lives and studies. I think that, at least being given the chance to education and a better income in the future, goes a long way. 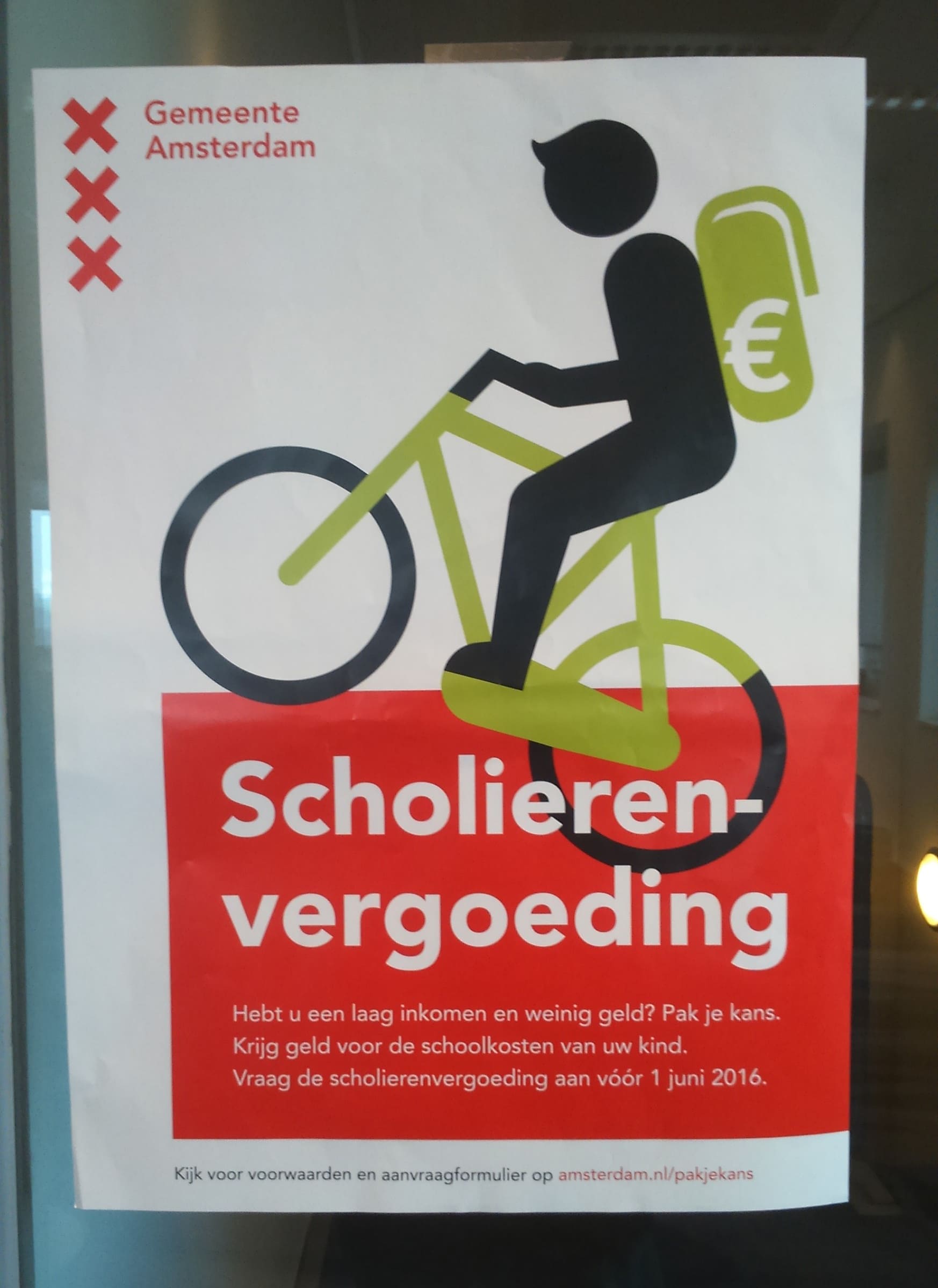