When you think of carnivals, Rio in Brazil is quite famous, but they are actually such a major festival event in Germany that they are considered the fifth season   here andare the next biggest winter tradition to Christmas. 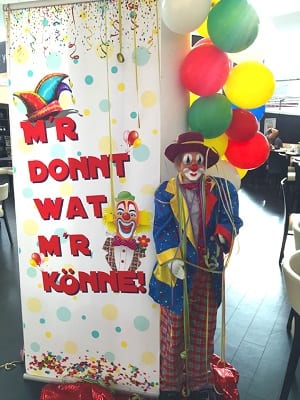 The carnival (“Karneval”) was originally a custom in areas with strong Catholic influences, but the religious aspect has become less prominent and it is now a familiar national event where people enjoy costumed parades. The largest and most famous carnival spots are Cologne, Düsseldorf, and Mainz, three cities in the Rhineland area in the west. The carnival is called Fasching in the Bavarian region in the south where Christianity remains strong and Fasnet (or Fastnet) in the southwest and a parade of people wearing wooden masks takes place. The word “carnival” comes from the Medieval Latin words carnem (flesh) and levare (put away), and the event period officially kicks off at 11:11 a.m. on November 11 of the previous year. The main highlight is the week in February/March about six weeks before Easter. In Catholicism, the 46 days leading up to Easter in spring is a time of fasting. Before starting the fast, people set themselves free and enjoy repeated festivities for a week to bid farewell to meat. At the end of the week, they transfer the responsibility for their rampant behavior to a large straw doll and set it on fire, bringing the carnival period to a close. The masquerade dresses are the most important element for German people. There are specialty carnival goods shops of a size you cannot imagine in Japan. In addition to ethnic German costumes like Dirndl and Lederhose, you can choose that year’s theme and costume from among all different types such as fireman or police officer costumes, party costumes, stuffed animal costumes, masked costumes, or ghost costumes, for example. Also, part of the fun is choosing accessories to match your costume from among the wide variety of hats, wigs, and other items. In the carnival, you can boldly become whoever you like, transforming from a tough and serious looking person to a cheerful and pleasant German! 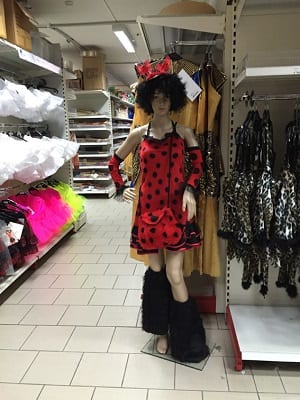 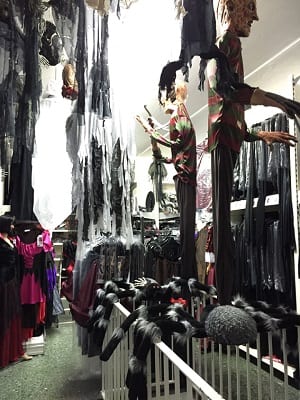 ＜Week-long carnival＞
Germans call this week-long period the “Crazy Days”. The first day that is a Thursday is called Weiberfastnacht in the Rhineland area and women march into town halls and other central places of power and take over the leadership. On that day, they even cut off the ties of men that symbolize their power. The men do get a kiss as compensation, but it is still slightly radical. A children’s costumed parade is held on the weekend. A parade where tons of candy is tossed into the crowds takes place with cheers of “Alaf” in Cologne and “Hellau” in Düsseldorf. Children are delighted to fill entire bags with candy. 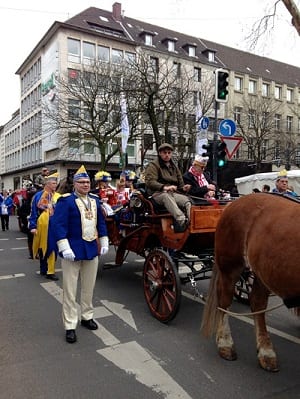 Day 5: Rose Monday (Rosenmontag) Unfortunately, the parade in Düsseldorf was postponed to March this year because of strong wind, but the one in Cologne was held as usual. The parade in Cologne was about 7.5 km long with 12,000 participants (90 floats, 82 drum and fife bands, and 500 horses). It is very grand, weaving through the streets of Cologne for about four hours watched by a million spectators each year. 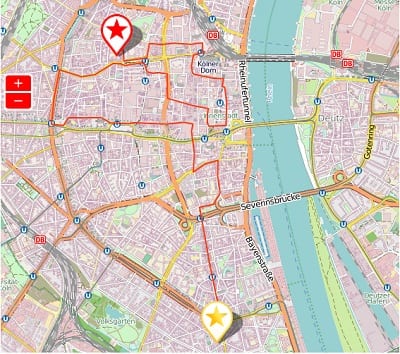 http://creativecommons.org/licenses/by-sa/2.0/
The aristocrats in traditional German attire handing out candy and flowers while progressing to the tune of the drum and fife bands look extremely dignified and majestic. Rosenmontag reaches its climax as huge floats based on all types of themes leave spectators in awe. 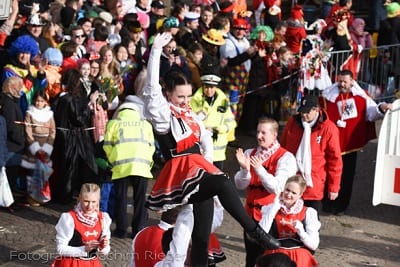 Day 6: Shrove Tuesday (Veilchendienstag) During Fastnacht, life-sized straw dolls are set on fire, bringing the carnival to a close. Ash Wednesday (Aschermittwoch) In the Christian religion, the period from this day until Easter is a period of lent when people refrain from eating meat. However, many people, including non-believers, give up all sorts of things like alcohol, candy, or TV. Perhaps abstaining from these things doubles the joy of Easter.