The other day, I visited Linz, Austria on a business trip.The first thing I noticed was that all the people living there followed the traffic signals. Even when there was no one else around, you could always count on people waiting for the light to change. I was so impressed by this. In my short lifetime, I’ve traveled across many countries. In many of them, people sometimes disregard traffic signals, but not here. Linz is the very first city where I felt that people followed traffic rules strictly. But enough about that, I’ll move on to the main subject.Today, I’d like to introduce to you Sunday Mass in Linz. After contemplating my schedule for that Sunday, which started at 10 am, I decided that I had enough time to attend Mass. Sunday mornings in Linz have a different feel. When walking around, you can hear the sound of music flowing from churches of different sizes. Most of the stores are closed, and not many people walk the streets. The Mass I attended is not at the Old Cathedral where Anton Bruckner was organist. I decided to attend Mass at the New Cathedral, a Neo-Gothic-style Cathedral built in 1855. 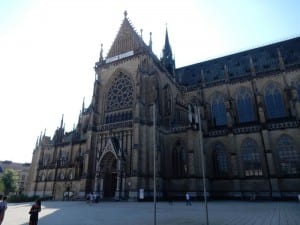 Upon entering the New Cathedral, I got myself a hymnal which loosely resembled a picture book, and sat on a narrow pew from which you can feel the warmth of wood. Among the congregants were many families, and a large number of children aged elementary school and under. I sat to the right of a lady in her fifties and behind a lady in her seventies. After a while, the priest and seven children following behind entered the cathedral to organ music. This mass had a distinct feature. It began with everyone singing hymns and dancing to the rhythm. This was done repeatedly. Next, you go up to receive communion, which is the body of Christ represented by a piece of wafer that the priest breaks off for you eat. The final part of the three-part ceremony is the shaking of hands among congregants. I’ve been to a number of Masses held at Cathedrals throughout Europe, but the flow of events at this Mass was unlike any I had experienced before. Later, when I visited during the day, the light from the stained glass was breathtaking. The transformation of its light throughout the day is also one of the appeals of the New Cathedral. 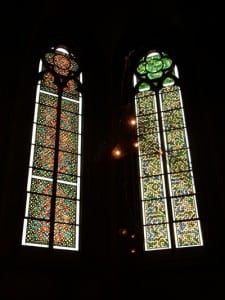 If you are ever in Europe on a Sunday, why not consider attending Mass at a local Cathedral? In closing, I’d like to share with you a display of coffins found near the New Cathedral that left a strong impression on me. 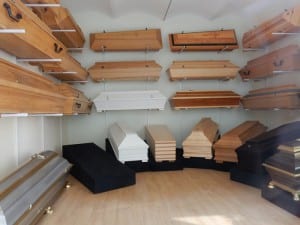 Knowledge Capital is an internationally active organization. We partner with various overseas facilities, and among other activities, participate in international events.Here, we would like to share with you some OMOSIROI (interesting) local information that our Knowledge Capital staff has discovered overseas.