As I was eating breakfast at a sidewalk café in the port city of Malaga in the Mediterranean, lots of pigeons came to the people at the tables to beg for bread. This plaza is in fact the area where the house of genius artist Picasso until he lived in until 11 years old was located, so in other words, this was his playground. It’s called the Plaza de la Merced, and his birthplace house where he lived until 3 years old is currently the Picasso’s Birthplace Museum. The house that he later moved to, which is just two houses down, also has a commemorative plate placed by the entrance. [caption id="attachment_1416" align="aligncenter" width="500"]

Photo 1. Offspring of pigeons that Picasso used to see gathering at the Plaza de la Merced in front of his parents’ home.[/caption] During his early, mid and late years in his artist career spanning more than 80 years, one of his recurring themes was the pigeon, and I felt as if I understood the reason why. He must have spent his formative years of childhood surrounded by pigeons. Perhaps it could be that the pigeons living in this area with this plaza as the headquarters may be connected by DNA of the pigeons sketched by Picasso in his youth 120 years ago. [caption id="attachment_1416" align="aligncenter" width="500"] 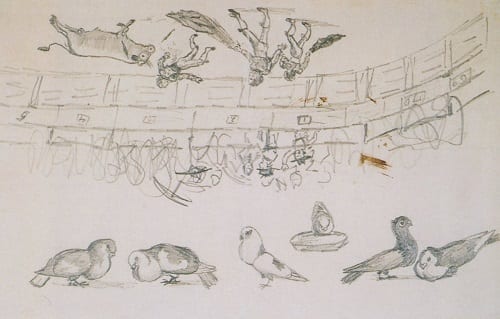 Photo 2. Rough sketch of pigeons and bullfighting when Picasso was 9 years old (Picasso Museum in Barcelona). Picasso’s enthusiasm for bullfighting must have been inherited from his father. He is said to have frequently gone to watch at a bullfighting stadium only 750 meters from his home.[/caption] Picasso’s father Jose Ruiz Blasco was a teacher at an art school, and also a curator at a city museum of art. He is said to have loved painting the lilac flowers and pigeons. The Picasso’s Birthplace Museum has a room reproducing his art studio, and a painting of a pigeon house is placed on the easel. Since it’s supposed to have been painted in 1878, 3 years before the birth of Picasso, the young Picasso must have observed this piece that his father painted. [caption id="attachment_1416" align="aligncenter" width="400"] 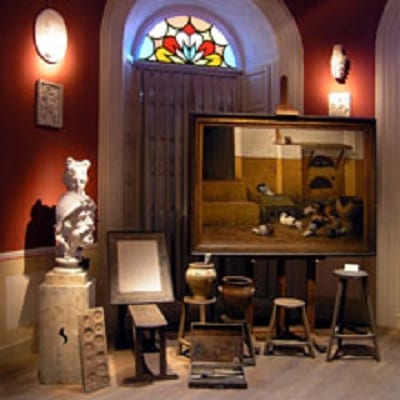 Photo 3. Art studio of Picasso’s father.http://fundacionpicasso.malaga.eu/ [/caption] He left Malaga due to his father’s job transfer and moved to the port city of La Colonia in northern Spain, and later lived in Barcelona and Madrid, then later ended up moving to the capital of art, Paris. He continued to paint pigeons in wide varieties such as the dying pigeons in the historical masterpiece “Guernica” as well as the pigeon with political implication used to symbolize peace in the poster for the World Peace Council. [caption id="attachment_1416" align="aligncenter" width="400"] 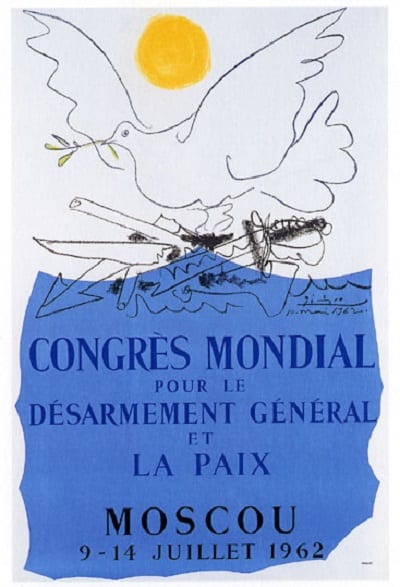 Photo 4. Pigeon poster from World Peace Congress Council. in Moscow.[/caption] Seeking his final home in the Mediterranean where the mild climate was similar to his hometown of Malaga and the bullfighting that he loved was held, Picasso finished his life in southern France. There he even built a pigeon house, and also produced a collection of pieces involving pigeons. This was a man who continued to paint pigeons until his death. 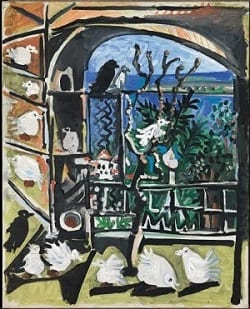 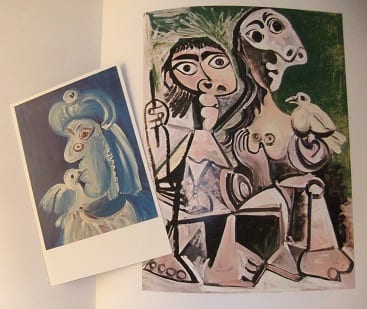 Photo 5. One of the pieces from his collection of pigeon house paintings (Picasso Museum in Barcelona). Photo 6. Pigeons appear even in his portrait paintings. The piece on the left is displayed at the Picasso Museum in Barcelona, which is located just 230 meters, or 5 minutes, walking from the house where he was born. The man and woman as well as the pigeon in the painting on the right is from a private collection. By the way, Picasso’s daughter, the youngest of his children (officially) and who was born when he was 68 years old, was named Paloma (meaning pigeon). Since she is a world famous designer, many of you likely know of her.