Milan has been hosting an Escher exhibition since June of last year. I’ve been meaning to go all this time, and now it’s coming to an end. When I see Escher’s illusionist trompe-l'œil pieces, they draw me in and inspire an indescribable childlike feeling in me—like when I was little and eating a long piece of spaghetti that seems endless… yet experience a feeling of something ending completely at the same time. While cooking and science have a fascinatingly intimate connection, the connection between art and science is one that hasn’t been fully explored. In the case of trompe-l'œil art, however, you end up with optical illusions born from the intersection between artistic talent and visual science. Perspective drawing is an indispensable element in trompe-l'œil works, and trompe-l'œil techniques have been in use since long, long ago. Italy is full of historic places that make use of these techniques as well.   In a shopping district in the center of Milan, wedged between the cutting-edge shoe and fashion shops of Via Torino, there is a small church. The architecture is so plain that you can walk right by it without noticing. I’ve gone down the road that runs along the backside of this church countless times in the twenty years that I’ve lived in Milan, and would often admire the tiny, adorable rear face and wonder what kind of church it was—though I never stopped as I passed by. The front face of the church was apparently left unfinished for hundreds of years before being completed by a different artist, so the era and style are different from that of the rear. Having always seen the back of it, I honestly didn’t think it was the same Santa Maria presso San Satiro. With no consistency between the front and back, the church had me completely fooled—but the illusion devised by the church’s creator, leading Renaissance architect Donato Bramante, is on the inside of the structure. When you come to Milan and visit this church, make sure to look carefully at the arches that continue behind the altar. When the architect Bramante built this church, there was something that prevented the project from going as he had planned: the relationship between the depth of the church and the road along the back that I have traveled so many times. Doubtless the negotiations went on and on, and when Bramante couldn’t get permission to do what he wanted, he surely became lost in thought for several days. After struggling with the problem and getting nowhere, he came up with a solution that was said to have influenced even the famous Last Supper mural painted by Leonardo da Vinci. Let’s turn now to the celling of the Sant'Ignazio church in Rome, where another illusion was performed as a way to resolve the discontent of local citizens when the structure went over budget during construction. The Teatro Olimpico in Vicenza is another unique and impressive example of this. I’ll give you a hint: it has to do with 3D effects. Well, it looks like I’m going to have to put together a trompe-l'œil tour of Italy’s historic buildings! 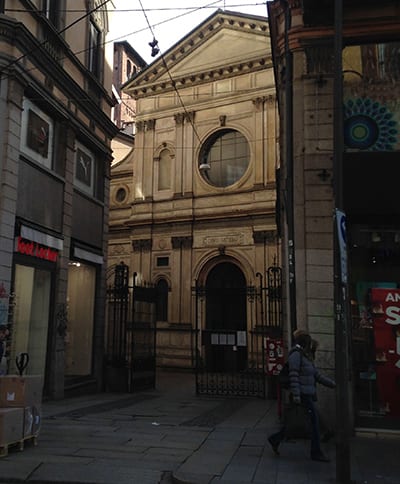 The front of the church 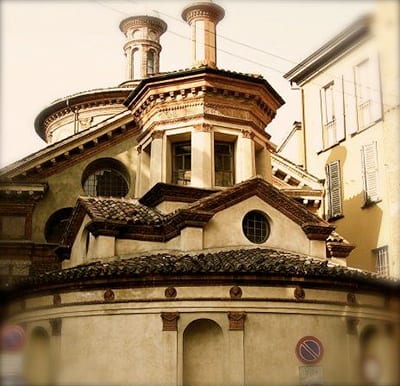 The backside of the church