Have you ever been told that you should be careful of men when you go to Italy?!Italian men are infamous for being smooth talkers.I wonder if that’s really true?Italian men are very gentle towards women. Of course, there are those who are violent and end up in the newspapers, but…Even when they simply utter the words, “How are you?” to women, they greet them with a sincerity that oozes the sense that they are speaking to someone they really like. They open doors for women and let them go first, and carry their bags as if to say, “I would never make a woman carry things!” They are considerate about so many things that I couldn’t name them all here.Personally, I think that in reality Italian men want women to treat them with the same kindness. I wonder if it isn’t the flip side of their desire to be spoiled by women…However, in reality it seems things don’t go so smoothly and in most cases the women are on the receiving end of the kindness…Italians are extremely expressive. From the viewpoint of we Japanese, whether gestures or the choice of expressions, it’s all very exaggerated. Even in public places full of foreigners, such as airports, it seems like Italians stand out above the rest. They speak and act as if they’re the leading character of a play with the world as their stage.They’re nothing if not animated.Incidentally, don’t you think that believing yourself to be the coolest in the world has a thorough impact on a person’s words and behavior? This answers the question, but come to think of it, a musician with an unattractive appearance can become the world’s most appealing star and be revered simply by demonstrating his talents at a concert.My Italian colleague told me the reason he became a musician in a rock band. When he was young, he went to a rock concert and fell in love with the music….No, not really. He realized the girls were staring passionately at the musicians in the band and hit on the bright idea that if he were to become a rock musician he’d be sought after by women!!He became a rock musician like he’d wanted and his dream came true (!) He says he was popular with the ladies. He also knew a song that could captivate women in the audience whom he zeroed in on, and he had a good time pouring all his energy into that song. (Unfortunately, I don’t remember the name of that song, so please don’t ask me what it is.)Perhaps it was created because there are so many smooth-talking Italian men, or maybe it’s because there are so many Italian women who stare passionately at the smooth-talking Italian men, but in Italy there is a dessert for adult tastes that features a bitter coffee flavor. (In actuality, it’s a dessert loved by men and women, regardless of age.) It’s tiramisu, a popular Italian sweet that is also well known in Japan. It has a firm presence and is not just a passing fad. The name of this dessert means, “cheer me up” and can be meaningful, depending on how you look at it. By the way, directly translated, tira means “pull,” mi means “me,” and su means “up.” The word tiramisu is pronounced in Japan with the wrong accent, so here is a one-point Italian lesson for the readers of this blog. When ordering tiramisu in Italy, you should stress the ti and stress the su even more strongly.Let’s say it together. “Tirami-su!” 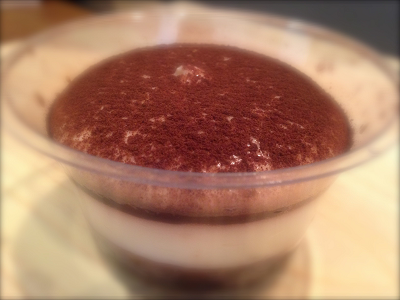