The holiday called Pfingsten was celebrated just recently on May 25th (Monday). It is a day celebrating the Pentecost on the 10th day after the Christ’s ascension to heaven and the 50th day counting from Easter. Over this extended weekend, a festival called Karneval der Kulturen (Carnival of Cultures) was held in Berlin. 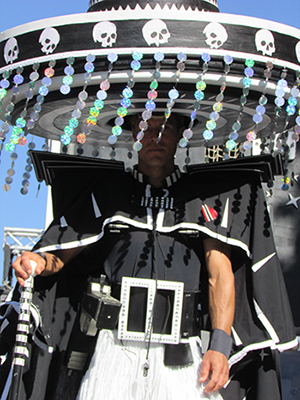 The history of Carnival of Cultures does not extend very deep, having begun in 1996. When viewing historical video material of the separation of East and West Germany, it could be easy to forget, but the unification was not something that occurred so long ago. Even in 1989, there was a young man who had been shot to death while attempting to cross the border into West Berlin. The unification was accompanied by complex and drastic changes during the 90’s, including the construction of a newly emerged Berlin and rapid increase of foreigners, bringing rise to a new wave of nationalism. As a way to confront this, Carnival of Cultures was one of the projects that the city of Berlin promoted for a better understanding of the diverse cultures.Among the foreigners registered to be residing in Berlin, the Turks top the list by a large margin, followed by the Poles, and then the Italians. There are many second or third generation Germans of Turkish-descent now due to the immigrant worker policy promoted in the 60’s, and there is also a large Turkish community. This contributes to the ease of living in Berlin, bringing in new Turks who immigrate through their relatives. Berlin is only 70km apart from the Polish border. Due to the lower cost of living and wages compared to Germany, there is an increasing number of Polish workers coming to Berlin especially after they joined the EU and the Schengen Agreement. As for the Italians, increase in young people and artists have been quite noticeable during the past few years. 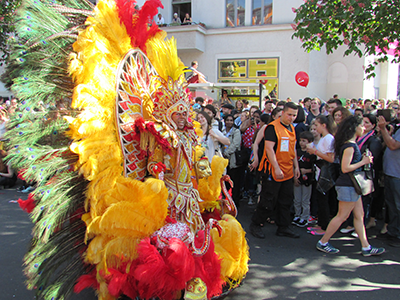 In contrast to the percentages of foreigners and their countries of origin, Carnival of Cultures was dominated by the presence of South America, in particular that of Brazil, the home of carnivals. Sixty-two organizations of various nationalities, types and sizes participated and paraded a stretch of the street extending over the distance of four subway stops. One group seemed like a club activity, with the luggage of their members on the bed of a pickup decorated fully by hand, while another seemed like a team of professionals, with serious dresses and polished dances, even keeping a smile while carrying giant decoration over their heads. There were also some groups playing the drums or having a band performance on the pickup bed. Led by a pickup carrying a large speaker at the front, participants in costumes followed, and the spectators who felt inclined joined the parade behind them.Many people may view Germans as being rigid, but actually they go all out when it comes to festivities or leisure activities. It could mean that they are also firm in making distinction between business and pleasure. Or perhaps through rational thinking drew the conclusion that “if we’re all the same fools (P), then why don’t we just dance (Q)?“ (from awa dancechant) After all, german is almost synonymous with rational. 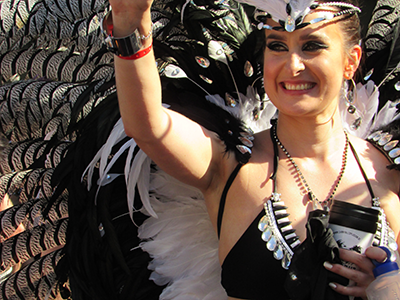 The parade only went on for a day, but the festivals went on for four days at the plaza near the end point of the parade. There were mainly four stages: Latin, Berlin Bazaar (Balkans/Turkey), Farafina (Pan-African) and Eurasia. It was similar to a small-scale outdoor festival where amateurs and professionals as well as men and women of all ages perform various kinds of music. Besides music, there were other various performances including art, street dance and Capoeira demonstration, as well as street stalls selling all kinds of things from food to miscellaneous ethnic goods, all contributing to the festival’s tremendous liveliness and congestion.Visitors were said to have exceeded 1.5 million over the four days. Considering that Berlin has a population of about 3.46 million, you can probably imagine how lively the carnival must have been.